The girl is an Elvis fan. Her boyfriend believes Carl Perkins was the true father of rock 'n' roll. They have come to visit the shrines of Memphis: the Sun recording studios, for example, where rock 'n' roll was born.

In the hands of another director, this setup would lead directly into social satire, into a comic putdown of rock tourism, with a sarcastic visit to Graceland as the kicker. But Jarmusch is not a satirist. He is a romantic, who sees America as a foreigner might - as a strange, haunting country where the urban landscapes are painted by Edward Hopper and the all-night blues stations provide a soundtrack for a life.

The tourists arrive in Memphis and drag their luggage through the cavernous train station, and walk to the Sun studios, where a guide rattles off her spiel about Elvis and Carl faster than an auctioneer could. Then they check into the Arcade Hotel, one of those fleabags that has grown exhausted waiting for the traveling salesmen who no longer come. This is a hotel out of a 1940s film noir, with neon signs and a linoleum lobby, and a night clerk who has seen it all and a bellboy whose eyes are so wide, he might be seeing everything for the first time.

Other people will check into this hotel during the movie's long night of mystery. There is a woman who needs to spend the night somewhere before she flies to Rome with the ashes of her husband.

Pursued by men with lust in their eyes, she runs into a woman who has just broken up with her boyfriend, and they decide to share a room for a night. Meanwhile, on the other side of town, some men are drinking too much and get into a disagreement, and drive off into the night in a pickup truck, and stick up a liquor store, and then they also head for the Arcade Hotel.

The soundtrack is from a local radio station, and Presley's version of "Blue Moon" is heard at one time or another during all three of these stories, providing a common link. An offscreen gunshot provides another link. And so does the ghost of Elvis, who seems to haunt the movie with his voice and his legend - and who appears to the woman whose husband has just died.

There is a strange appropriateness there. It is not her own husband who appears in the night, spectral and mysterious, but Elvis, and his legend seems to inspire the film. But this is not the Elvis of the supermarket tabloids, just as "Mystery Train" is not about dusty Amtrak coaches. The movie is about legends, and people who believe in them, and in fact it is the movie that believes most of all.

Jarmusch believes in an American landscape that existed before urban sprawl, before the sanitary sterility of the fast-food strips on the highways leading into town. His movies show us saloons where everybody knows each other, diners where the short-order cook is in charge, and vistas across railroad tracks to a hotel where transients are not only welcome, they are understood.

"Mystery Train" is Jarmusch's third film, after "Stranger than Paradise" and "Down by Law." In all three there is the belief that America cannot be neatly packaged into safe and convenient marketing units, that there must be a life of the night for the drifters and the dropouts, the heroes of no fixed abode and no apparent place of employment. These are the people that songs like "Mystery Train" are about, and although in fact their lives may be flat and empty, in Jarmusch's imagination they are the real inhabitants of the city, especially after midnight.

"Mystery Train" is not a conventional narrative, and it is not how the story ends that is important, but how it continues. It is populated by dozens of small, well-observed moments of human behavior, such as the relationship between the night clerk (Screamin' Jay Hawkins) and the bellboy (Cinque Lee), or between the two teenage Japanese tourists (Masatoshi Nagase and Youki Kudoh), whose entire image of American reality is formed out of popular culture.

The best thing about "Mystery Train" is that it takes you to an America you feel you ought to be able to find for yourself, if you only knew where to look. A place of people who are allowed to be characters, to be individuals, who do not have to graduate from Hamburger University to stand over a grill. The train is the perfect metaphor in this movie. It's not where it's been that's important, or even where it's going. It's the sound of that whistle as it finds its way through the night. 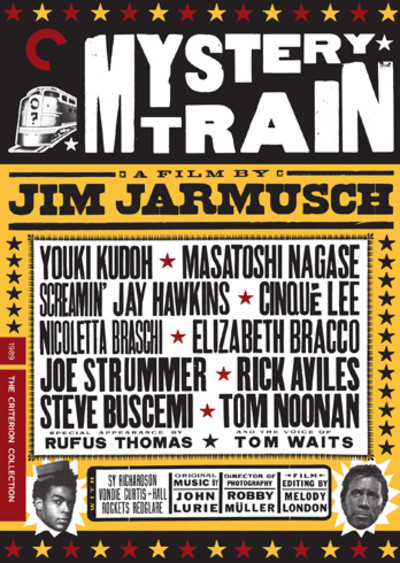 Rick Aviles as Will Robinson