My Life as a Zucchini

“I’m here because I think I killed my mom,” the big-eyed, blue-haired boy who goes by the name Zucchini tells one of his new not-yet-quite-friends at the orphanage early in this short, delightful movie. Actually, he kind of did kill his mom. As the movie begins, the clay-animated fellow is in the little attic where he sleeps, and from which he sometimes flies a kite on which he’s painted a portrait of his absent father. He’s building a pyramid out of his unwell mom’s discarded beer cans. But the structure collapses, the cans scatter everywhere, and soon his mother is climbing a ladder into his lair, promising to beat him as he’s never been beaten before. Terrified, he slams shut the opening into the attic. Right on to mom’s head, it seems.

“She’s gone,” says the kindly police officer who handles Zucchini’s case, voiced in the English-language version of the Swiss/French film by Nick Offerman. Said policeman takes Zucchini to a nearby orphanage, staffed by kindly women and containing a good half-dozen kids, all of whom give Zucchini a good razzing at first. They eventually reveal themselves as good-hearted, lonesome souls looking for a family, one that they eventually find in each other.

Adapted from a novel by Gilles Paris that was made into a live-action French drama in 2004, “My Life As A Zucchini” is a relatively uneventful film once you get past the spooky opening. Life in this particular orphanage is not terribly bad at all. The kids even get to go on a trip to ski country, and have a dance party where they bop around crazily to Grauzone’s “Eisbaer,” one of the great Swiss post-punk ditties. Their early rivalries grow into deep friendships. Soon a pretty girl, Camille, turns up, and she and Zucchini find an immediate affinity. That affinity finds confirmation of sorts in Camille’s slightly spooky orphanage back-story, but isn’t reliant on it. The only fly in the ointment is Camille’s terrifying aunt (voiced in the English language version by Amy Sedaris) who barges into the orphanage like the proverbial bull in a china shop to demand custody.

The plot twist by which danger is averted is a clever one, but this is not a very plot-driven film, which is unusual for an animated picture. That’s not to say the writing lacks—the screenplay adaptation is by Céline Sciamma, the director of the fabulous 2015 movie “Girlhood” and the co-writer of André Techiné’s distinctive 2016 film “Being 17.” The character work here is both intimate and nicely compressed. But the movie really gets to its most sublime heights visually. Every frame has a striking bit of visual business going on therein, but not in a flashy way. The bedrooms of the orphanage have the long shadows and enigmatic intimations of both Edward Hopper and Giorgio de Chirico. The children have big eyes that aren’t creepy or kitschy but genuinely captivating. The creation of a world very much unlike our own but still entirely recognizable as a locus for pain and exhilaration is always to be celebrated.

It is not for nothing that this is one of the five films in the running for Best Animated Feature in this year’s Academy Awards. Another critical favorite, “Kubo and the Two Strings,” is also in that group, and I’d say these two are the most deserving. In the middle of the end credits there’s another treat: an animated rendition of the audition of Gaspard Schlatter, the young boy who voices Zucchini in French. It’s a disarming, funny bit and a lovely coda to a graceful and inspiring picture. 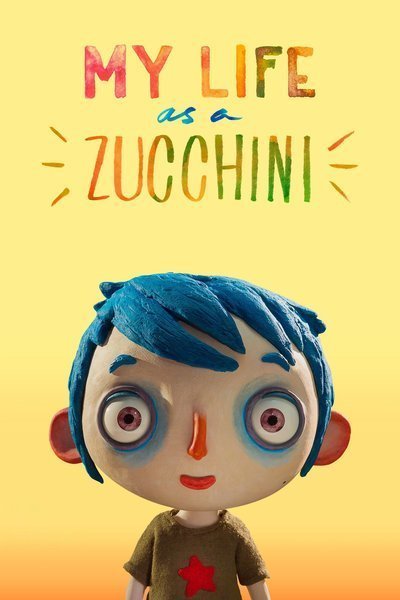 Will Forte as (voice)