When Duncan Jones was doing press for his excellent “Moon,” he told me that he already knew what his follow-up would be, a passion project called “Mute,” which he said would be to his first film as “Blade Runner” was to “Alien.” He also mentioned that the film would take place in the same universe as “Moon,” and that he hoped to make it soon. As often happens in Hollywood, hope is deferred, and Jones would make the great “Source Code” and the misfire “Warcraft” before returning to the ambitious project with a silent leading man. “Mute” premieres on Netflix today and it’s an interesting chapter in the company’s onslaught of sci-fi entertainment in recent months, including “Bright,” “The Cloverfield Paradox,” and “Altered Carbon.” Sadly, Jones’ passion has not made it to the screen in a way that’s likely to make viewers feel the same excitement he had about the project so many years ago.

“Mute” opens with an accident. An Amish child is horribly injured, and his parents refuse the surgery that could have saved his ability to speak. Cut forward a few decades to an almost cyberpunk future that looks like a blend of anime inspirations, “Blade Runner,” and the kind of thing Jones likely doodled in a notebook when he was bored in school. The whole aesthetic of “Mute” has a “teen fantasy” vibe to it from the tech gadgets that populate this version of Berlin to the weird sex robots and fetishes occasionally highlighted. This vision of the future is more colorful than Ridley Scott’s but it was clearly built on the template of his landmark film.

In this city of hustlers, we meet Leo Beiler (Alexander Skarsgard), the adult version of the Amish kid from the opening scene. He works at an adult entertainment club with a waitress named Naadirah (Seyneb Saleh), whom Leo is dating. Jones takes his time establishing their relationship as a loving, sweet one—Skarsgard can convey a great deal of affection through only his eyes—but it’s also clear that Naadirah has a secret. Meanwhile, we meet a couple of American surgeons named “Cactus” Bill (Paul Rudd, sporting a soon-to-be legendary mustache) and Duck (Justin Theroux). They perform surgeries for criminal enterprises and Bill sulks his way around Berlin. He too clearly has a secret. Maybe it’s related to Naadirah’s? And then Leo’s girlfriend disappears, and our mute hero does whatever it takes to find her.

Jones seems to embrace the noir roots of “Mute”—there’s a poster for “The Blue Angel” in one of the rooms and “the missing girl” is a classic noir set-up—but his piece doesn’t have nearly the atmosphere it needed to make the genre connection work. The production design is shockingly hollow, without a sense of world-building. It’s almost as if Jones and his team were too hesitant to just lean into their influences and so worked too hard to set their design apart, but that makes for inconsistencies and unengaging visuals. It’s perfectly fine to lean into a classic aesthetic like “Blade Runner”—“Altered Carbon” does so effectively—but don’t go halfway.

Viewers likely won’t complain too much about the film’s look (although its design failures will register subconsciously), but they will notice that there’s almost no real sense of danger in this world, and so the stakes don’t seem high enough to care about what happens to anyone. The biggest problem comes down to pacing. The movie takes too long to go anywhere, and so it’s the kind of movie that you get an hour into before you realize that you don’t care about what’s happening. It doesn’t help that Rudd/Theroux and Skarsgard feel like they are in different movies tonally, and the former is more interesting. Skarsgard isn’t bad but Jones never quite broke how to convey his story without dialogue and so he seems more comfortable in the other one. And Rudd, as he often is, is the best thing about the film, finding a sleazy register he doesn’t often use as an actor, which makes the movie unbalanced and causes it to sag a little when it goes back to Leo’s quest.

Ultimately, “Mute” is a mishmash of ideas in search of a movie. Jones is clearly an ambitious and interesting filmmaker. He’ll get over this misfire and possibly even complete what was once proposed as a loosely-connected trilogy. I hope it doesn’t take as long for that one to get to viewers as it did with “Mute” because it doesn’t seem like the delay did this project any favors. 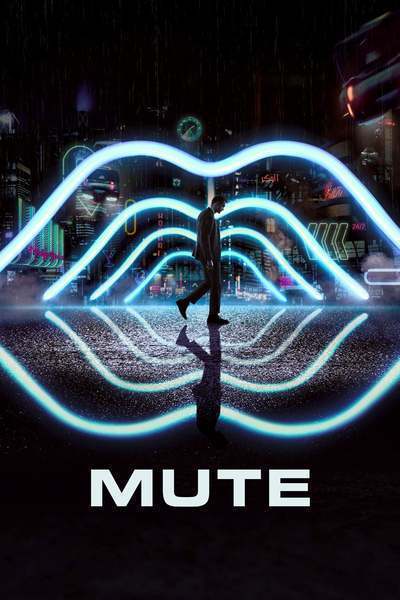