“Museum Town” is a slight, low-key documentary but don’t tell that to the people of North Adams, Massachusetts. It’s a love letter both to the people who live in North Adams and to the outsiders who made it into one of the most unusual destinations in the country. Narrated by Meryl Streep and directed by Jennifer Trainer, it has a charming likability in the way it connects the city's history to its present and future. If anything, I longed for a bit more of that connection, trying to understand more fully how a place that once helped manufacture parts for nuclear weapons is now using that same space to manufacture parts for world-famous artists. How does one go from industry to artistry? And what does that say about the fluidity of human nature and the places in which we live?

Filmed largely in the middle of the last decade, “Museum Town” follows the conception and construction of a massive art installation called “Until” by Nick Cave that was displayed at the Massachusetts Museum of Contemporary Art (or Mass MoCA for short) in 2016 and 2017. For decades, North Adams, on the west side of the state, was a center of industry. Some of the best scenes in “Museum Town” are interviews with a nonagenarian who has seen the entire arc of the city, having worked at the Sprague Electrics factory that is now the home of Mass MoCA. When Sprague left the city, it looked like everything about it would dwindle and fade, but the ‘90s saw the reinvention of the space for modern art.

Director Jennifer Trainer was the first director of development at the museum, which may have clouded the potential paths for “Museum Town” to take. Scenes in which locals talk about having seen art around the world but having no interest in the museum in their hometown feel like local flavor instead offering an interesting dissection of how creativity and community can (or can’t) co-exist. Trainer clearly loves Mass MoCA and she peppers the film with some of its most world-famous guests, including clips of Laurie Anderson and a conversation with David Byrne about an installation he did there years ago that earned the organization its much-needed funding.

Ultimately, “Museum Town” is a loving tribute that misses some opportunities but also fully represents the unpredictability of life. No one who grew up in the manufacturing industry in North Adams could have guessed it would someday be the center of a documentary about modern art. And I liked how the chosen installation to profile by Mr. Cave seemed to mirror the unpredictability of the city itself. As he’s putting it together, he collects tons of antiques from anywhere he can. After all, everything and every place has a story to tell. 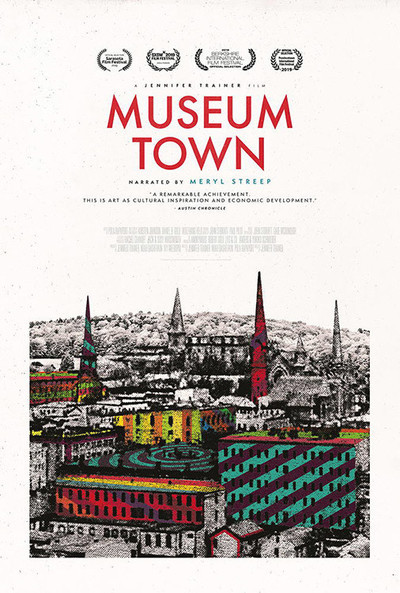 Nick Cave as Self

David Byrne as Self