The weight of family obligations lie heavily on Kasie (Tiffany Chu) in Justin Chon's sophomore feature "Ms. Purple." There are times Kasie can't even breathe, when every event in her life conspires against her, limiting her choices, giving her no way out. She does what must be done to care for her dying father. What that might look like, the worlds she needs to enter, the company she must keep, is the environment of "Ms. Purple," a deep dive into Los Angeles' Koreatown, its crowded streets and strip malls, rooftops and nore bangs, i.e. private karaoke rooms where young women are paid to pour drinks and hang out with clientele. Chon, who co-wrote the script with Chris Dinh, knows this world very well. Although the script sometimes strains for symbolism to up the ante (when it doesn't really need upping), "Ms. Purple" is a beautiful film about two siblings, damaged from their childhoods, lost in their young adulthoods, but bound together by family ties, for better or worse.

Kasie spends her night as a doumi, i.e. paid hostess, slinging drinks for drunk guys singing karaoke, chasing them down for tips (and getting pushed to the sidewalk as a result), all so she can afford a home nurse to care for her dying father (James Kang). When the nurse quits, she begs Kasie to call hospice. Instead, Kasie puts out a call to her brother Carey (Teddy Lee), who ran away from home when he was 15. Carey is estranged from their father and somewhat estranged from his sister, but he has nothing else going on—all he does is sit in an internet cafe playing video games—so when she asks for help, he comes.

Through intermittent flashbacks, we learn the traumatizing central event of Kasie and Carey's childhood. Their mother abandoned her children and husband to marry a rich guy, never once looking back. Their father did the best he could, but both Kasie and Carey carry emotional scars. The reunion between the siblings is at first wary and tentative. There's some deep and complicated history here.

Sibling relationships on film so often ring slightly false. You rarely believe that these people grew up together, were three and four years old together, have known each other always. It's a difficult balance to achieve. But Chu and Lee are so believable as siblings that "Ms. Purple" just wouldn't work as well as it does without it. There are moments when the cares of their lives fall away, and they start laughing about something from the past, or just go out to get some ice cream. The actors settle into a well-worn ease with each other, and you can somehow see—like an afterimage—the two little kids in the flashback, scared and sad that their mother is gone. These sibling scenes are the heart and soul of the film, the source of its power. Carey helps bathe their father, noticing the festering bed sores, and suggests it's time for hospice. Kasie flips out. This man took care of her, she remembers him crying out to the wife who left him, "I want to show you I'm not a loser!" She will not "abandon" him.

Along with her work at the karaoke place, Kasie has intermittent meetings with a rich client, who buys her clothes, takes her to fancy parties, and seems to feel he owns her. She wonders if her brother wonders what she does all night. A new friend of sorts, Octavio (Octavio Pizano), who worked as a valet at the karaoke place, invites Kasie out to do things, and he seems so friendly and carefree he comes from another world. "Ms. Purple" smartly resists the impulse to make this story swerve into a romance between Kasie and Octavio. The potential is there, but Kasie is too frantically busy, too grief-struck, too everything, for romance. She has no bandwidth left for anything other than survival.

And it is here where Chu, a newcomer, shines. She carries the film. Her emotions are volatile, she barely sleeps; she's worn down by exhaustion and sorrow. She's falling apart. Quickly. It's a very powerful performance, open and true, and never once "pushed."

The film was beautifully shot by Ante Cheng, who used a lot of handheld camera-work which also manages to be carefully framed (no small feat). The colors are warm, deep, and emotional, dark blues pierced with neon, palm trees waving in the pink dawn sky, the mid-day glare of Koreatown's bustling streets. There is one very lively sequence where Carey decides to roll his father's bed—with his unconscious father in it—down the street, so his father can get some sun, all to the accompaniment of The Proclaimers' "500 Miles."

Some of the symbolism has the feeling of being laid on top of the narrative. It feels imposed, especially when it goes from subtext to text. You can see it coming from a mile away. But "Ms. Purple" works because of Chu's performance. Watch her in the scene when she goes for an informational interview at a hospice center. Kasie sits and listens to what the woman says. She doesn't speak at all. Her whole life is on her face. 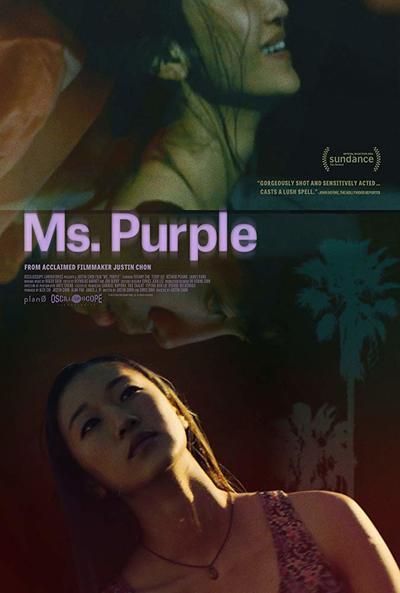