Many of the great tragic figures in drama are heroes, but some of the very best are not. Macbeth. Medea. Tony Soprano and Walter White. There’s something especially satisfying when a storyteller manages to draw out all the shades of such people—their failings and strengths, the wrongs they do others and those done to them, and above all, their inner turmoil, or chilling lack thereof. Phyllis Schlafly is no Walter White—no bodies in bathtubs, no RV in the desert—but as fictionalized by “Mrs. America,” the masterful new miniseries from FX on Hulu, the two share a very damaging streak of self-delusion, staggering levels of self-interest, and a swiftly degrading sense of decency.

So sure, she’s not Heisenberg. Yet in the hands of showrunner Dahvi Waller and actor Cate Blanchett, she’s a figure who can be every bit as infuriating and even a bit terrifying. Schlafly is ostensibly the subject here, and Blanchett’s performance is masterful, but “Mrs. America” is an ensemble piece in which its central figure functions as an event—that uncanny calm that comes before a tornado begins to form. This is the story of the fight to pass (or, depending on your perspective, stop) the passing of the Equal Rights Amendment, as seen through the eyes of a group of second-wave feminists on one side and a group of proud housewives on the other, the latter spurred to action by Schlafly. And it’s the story of an expert on national defense who’s asked to take notes in a meeting because she’s the only woman in the group. The waves forms, the air grows uncannily still, and Phyllis Schlafly happens to the United States.

That’s the moment that kicks off “Mrs. America” in earnest. (It’s also a sort of spiritual twin to the series’ humdinger of a final shot, but you’ll need to watch through to see what I mean.) One of the sharpest, most empathetic aspects of the miniseries is its readiness to illustrate the ways in which the intelligent, driven Schlafly was discriminated against. In this fictional telling, she is belittled, dismissed, ignored, harassed, and condescended to, but nevertheless, she persists. That is, until she’s ignored in that meeting, one in which she’s the most expert authority. Yet she’s only asked about the E.R.A. (a “woman’s issue”) before she’s consigned to the role of taking minutes. And then she remembers a friend, Alice (the unsurprisingly excellent Sarah Paulson), who worries that the passage of the E.R.A. will mean her daughters can be drafted and alimony and child support will be made illegal, and who urged Phyllis to do something about it. And so she pivots, leaning into her own prejudices and sense of superiority to make herself the ultimate conservative woman—one all the men will listen to because she’s saying what they want to hear and giving them the cover they need to vote like it’s the stone age.

The problem is that few, if any, of her arguments are based in fact. This leads the “libbers” to write her off as a quack, dismissive of the massive power of her lies, conspiracy theories, and nightmare scenarios. (Sound familiar?) Yet they all eventually come around to the threat posed by Schlafly, Alice, and the rest of STOP ERA (“stop taking our privileges”). Among the first to take her seriously is Betty Friedan (Tracey Ullman, in fine form), a feminist of towering stature whose insecurities and caustic personality often put her at odds with the savvy, powerful Bella Abzug (the great Margo Martindale). Bella often squares off against Shirley Chisholm (Uzo Abuba, also terrific), unable to understand why the notion that Chisholm’s historic run for President was merely symbolic would be hugely frustrating and hurtful to the Congresswoman. And though Gloria Steinem (Rose Byrne, expertly cast—honestly, they’re all terrific) is one of Chisholm’s staunchest supporters, her own blind spots rise up with great frequency, often to the detriment of the brilliant women of color in her orbit.

Each gets her turn in the spotlight, if not several. Most of the uniformly strong nine episodes take their titles from one or more of these women, and while none of them (with one exception) focus solely on a single character, those points of focus are clarifying. One such example is “Jill,” an hour which focuses on Republican feminist Jill Ruckelshaus (Elizabeth Banks). Like all the best hours of this series, it’s as much an exploration of ideas as a character study. A highly visible conservative who also fights for abortion rights seems like an impossibility now, and this hour traces the seismic shift that ultimately pushed figures like Ruckelshaus to the outer reaches of their party. Yet it’s also an emotional exploration of what it means when a woman has to undermine or sideline herself, because having an “outspoken” wife has become a liability for her husband’s political career. “Shirley,” which should earn Aduba an Emmy nomination if the voters have any sense, is similarly effective, even as it balances the stories outside Chisholm’s (which could make for a miniseries all on its own).

Yet the best hour of the bunch—visually, narratively, and in terms of performance—is “Houston,” the penultimate hour, which sees Paulson’s Alice and some other members of STOP ERA pile into a car for a road trip to the 1977 National Women’s Conference in the titular city. It’s a tour de force for Paulson (aren’t they all?) who’s thrown headlong into a dark night of the soul in which she’s forced to question not only her political beliefs but her own image of herself and, most notably, the intentions of her friend Phyllis. It’s a chilling, lively, inventive hour, expertly directed by Amma Asante, growing progressively more visually disorienting as Alice’s world is shaken.

Alice isn’t quite an audience surrogate, but she is an immensely appealing character, and is perhaps the best illustration of the show’s great strength: its willingness to acknowledge all the parts of its characters, good and ill, kind and hurtful, and to show how pervasive misogyny can be in shaping the minds and hearts of people of all genders. There’s not one character here—well, female character—who isn’t full of contradictions and flaws and tiny, festering wounds bandaged and ignored for years. There are egos and tempers and prejudices in abundance. But “Mrs. America” has empathy for nearly all of them. (The exceptions: some men, most overt racists.) Maybe their intentions are good. Maybe they are who they have been made to be. It takes it all in, even as it condemns their biases and cruelties. There is but one unforgivable sin in “Mrs. America,” one epitomized by Schlafly and brought to life by Blanchett’s frozen smiles, flickering eyes, and a voice that shoots out like the gong of a bronze shield: to know something is wrong, do it anyway, and then keep doing it for as long as you can.

Mrs. America starts on FX on Hulu on Tuesday, April 15. 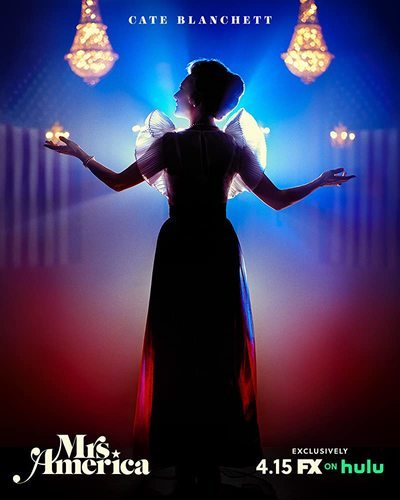