In 2015, the New York Times Magazine controversially polled its readers on whether they could kill a baby Adolf Hitler, spinning the question into popular fodder for historical thinkpieces and social media chatter. Ironically, it was back in 1933 when a young, inquisitive, prophetic Welsh journalist named Gareth Jones first pondered this query; at least some oblique version of it, wondering what a Hitler-free future might look like, years before the Holocaust. After attending the newly appointed Chancellor’s rally in Frankfurt and flying in the “Richthofen” plane with him, an alarmed Jones recalled the journey, Hitler’s “emotionless eyes” and reflected on his disconcerting rise, writing in his piece, “If this aeroplane should crash, then the whole history of Europe would be changed.”

Agnieszka Holland’s (“In Darkness”) mostly successful (if not a bit bloated) political thriller “Mr. Jones” finds our eponymous 20-something character (James Norton, a gentle powerhouse) while he’s high on his recent success as the fearless journalist who just interviewed Hitler, before going onto becoming the first person to expose the atrocities of the Holodomor; Stalin’s man-made famine that killed millions of Ukrainians between the years 1932-33. Unfortunately, it then turns Jones’s fascinating (and fascinatingly not well-known or widely told) life story as an intrepid reporter into a disorganized mélange of genres—slow-burn procedural, survival tale, film noir and so on—with some dramatic highs and occasional flourishes of gripping set pieces.

And yet, Holland’s film manages to get under one’s skin on the whole, remaining a compelling watch throughout in spite of its rambling feel. This is in large part thanks to first-time writer Andrea Chalupa’s clear-eyed resolve to find present-day relevancy in Jones’s heroic commitment to publishing the facts and agitating those in power, when today’s world has almost become numb to fake news. In that, the screenwriter underscores Jones’s sense of journalistic duty liberally, celebrating his instincts, bravery and unwavering ethics to tell the truth no matter what the cost might be. (Since the film is based on true events, it’s not a spoiler to mention that Jones, who was killed the day before his 30th birthday, paid the highest possible price. His mysterious murder was suspected to be the work of the Soviets.) And there are also passages here and there that will sound depressingly familiar to any viewer in the Trump era. “Does he really believe everything he says,” Jones is asked about Hitler for instance, by someone who’s just read his interview with the Fuhrer. “He’s deranged,” someone suggests, but perhaps with a side of misjudged flippancy.

Admittedly, Chalupa’s script shows certain signs of a new scribe's overeagerness. Her story gets off to a confusing start, giving us a disorienting opening segment with a dogged George Orwell (Joseph Mawle), while he writes Animal Farm as an outspoken critic of Stalinism partly influenced by Jones’ findings. We cut to this superfluous framing device from time to time, as Chalupa tries to acknowledge Jones’s work from a different angle (albeit in a clumsy fashion), presenting him as the person whose labor became historically seminal in more ways than one.

Thankfully, Holland doesn’t dwell on this kick-off for too long and instead promptly places us in the room where Jones gets laughed at by a group of high-ranking British government officials that casually dismisses his warnings about Hitler and an impending attack from the Germans. But being a foreign affairs advisor, Jones manages to pull enough strings to land himself on an assignment to the Soviet Union to interview Stalin and see the country sold to the Western world as an economic utopia, for himself.

Swiftly navigating and confronting various crooked machinations in Moscow, including shady powers who try to prevent him from venturing to other parts of the country, Jones finally makes his way to Ukraine via dangerous means, after learning about the widespread, government-formed hunger wiping out the region’s people. This devastating chapter is when Holland’s film veers into survival territory in earnest, taking the viewers on a frosty, bone-chilling ride through the famine-stricken countryside on both trains and foot. The dark-hued, reflection and shadow-heavy cinematography of Tomasz Naumiuk also switches gears at this stage, assuming an existential, dreamy (or rather, nightmarish) Andrei Tarkovsky-esque look. As she steers her camera across open snowy grounds, capturing occasional dead bodies and helpless children who still swear their allegiance to the Soviet Union, Holland aggressively quiets her colors down to an almost black-and-white palette, making the occasional shades of a fire or piece of fruit pop with purpose.

While “Mr. Jones” isn’t close to being in the same league as great journalism films such as “All The President’s Men” and “Spotlight,” it takes a noble page from their book in not delivering a conclusive ending. Instead, it leaves things at a place where the work to uncover “only one version of the truth” (as often cited by characters in the film) seems to be just beginning. This might not be the ultimate movie to honor the idealistic legacy of Gareth Jones, but it’s a dignified one all the same, with an uncompromising moral compass. 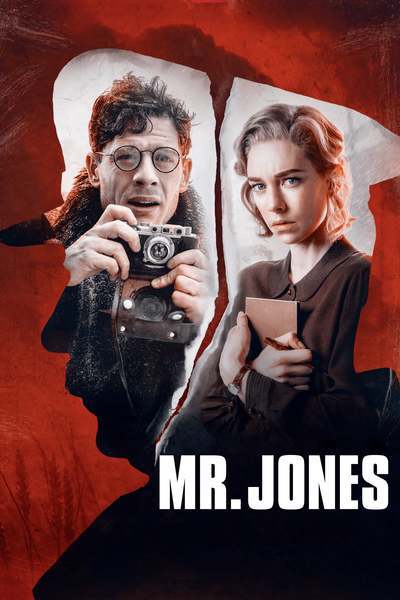