How did this truly crummy movie get made? I have a theory. Co-producers Peter Jackson and Fran Walsh, who once upon a time could put together a motion picture that was engaging, coherent, entertaining, and even genuinely dazzling, looked at a bag of money that Universal and sundry other sources of capital left on their table and asked themselves, “Can we whiff as badly as the Wachowskis did with ‘Jupiter Ascending,’ only leaving out the fun pansexual campy parts?” And the answer is, absolutely!

Co-written by Jackson and Walsh (you may remember their “Heavenly Creatures” and a couple of Tolkien adaptations) with frequent collaborator Philippa Boyens, from a sorta-I-guess-must-have-been YA novel (it was published by Scholastic in the States, I see) by Phillip Reeve, “Mortal Engines” begins with the usual voiceover informing us how “that Ancients” destroyed Earth’s civilization in “only 60 minutes,” using bad and terrible weapons technology, and how now the world itself is unmoored, as predator cities scavenge the globe for what’s left of its resources.

How this translates into visual terms is that whole, or at least partial, world cities now are mobile, going around on giant tank treads. How this engineering feat was achieved is not addressed. Anyway, London, which we still largely think of as genteel, is hauling ass and hunkering down on a much smaller “Romanian mining town,” hoping to steal its salt. On that town is Hester Shaw (Hera Hilmar), a teenage girl looking to take revenge on London’s power engineer (or something) Thaddeus Valentine for killing her mom. London’s own Tom Natsworthy (Robert Sheehan), a young historian building up a collection of “the Ancients’” weaponry (the Ancients, in case you’re missing it, were us) the better to dispose of it so as to study war no more, is initially a Thaddeus fan. But once Tom gets too close to Hester’s secret, down London’s garbage chute he goes, the better to find love and adventure with the feisty, reticent Hester. This move, among other things, allows Thaddeus access to the weapons storehouse, which will abet him in constructing a Brand New Superweapon.

As for Hester, does she have much to be reticent about. In her orphaned girlhood she was adopted by a member of something called “The Lazarus Brigade,” undead robots with high-level superpowers who always get what they want. Her adoptee, Shrike, played by Stephen Lang with a substantial overlay of CGI, was touched by her promise that she would allow him to turn her into a similar robot (because it sounds like such a great deal, right?). But Hester reneged to seek revenge on Thaddeus, and Shrike went apeshit, or whatever the equivalent of apeshit is for super-powered undead robots. The better to keep Hester at bay, Thaddeus frees the very insistent and very destructive Shrike from a floating prison and off he goes to collect on her promise. He destroys so much in his path it’s a wonder that Hester’s many newfound friends even keep her around, but lucky they do, because, surprise, she holds the key to dismantling Thaddeus’ super weapon. The storyline is just packed with surprising plot developments like that.

Said story’s various components are introduced so haphazardly they can’t help but elicit titters, but even if brought into the picture differently, Shrike, intended as a poignant reminder of What It Is To Be Human, is a terrible idea terribly executed. I know Lang has probably been cooling his heels Down Under waiting for the “Avatar” sequels to start shooting long enough that he’s gotten antsy, but I wish he’d found a better way to waste his time. Even by the lower standards of kids’ stuff, this movie is laughably portentous and kitschy, and gets progressively worse, what with the heavy-handed introduction of the ethnically diverse rebel flyer team and the Dalai Lama lookalike leader of the Asian territory Thaddeus intends to bulldoze.

But it looks great, right? Not really. Directed by Christian Rivers, a longtime art director for Jackson, the overall look asks the question, “are you sick of Steampunk yet,” and for me, yeah. Never mind that the whole concept of the movie is like someone decided to take Terry Gilliam’s “The Crimson Permanent Assurance” way more seriously than it was ever intended. I did like the near-cavernous tread tracks that Hester and Tom had to run around in on their Way to Love. 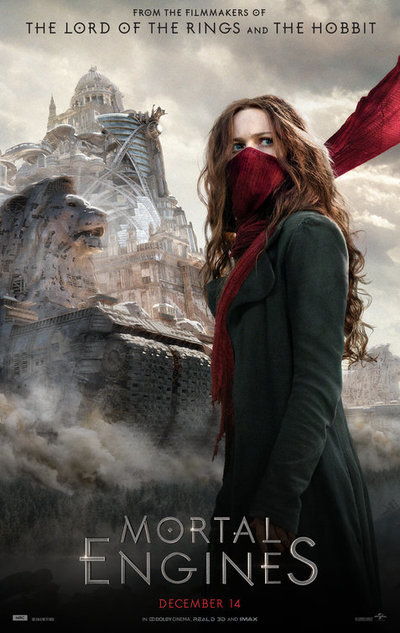 Rated PG-13 for sequences of futuristic violence and action.