Sebastian Stan and Denise Gough have wild, spontaneous sex all over the place—on the beach, in a truck bed, on a ferry—in the whirlwind Greek romance “Monday.” But while that sounds passionate and exciting, director and co-writer Argyris Papadimitropoulos’ film is actually a repetitive slog.

As the couple’s once-thrilling romance quickly wanes, so does the movie. And maybe that’s the point, but it doesn’t justify making us suffer, too, for nearly two hours. We’d feel more invested in their highs and lows, their will-they-or-won’t-they, if the characters were better defined. Stan’s Mickey is an easygoing and charismatic party boy with a Peter Pan complex; Gough’s Chloe is a captivating and pragmatic lawyer who’s the steadier one in the relationship (as in, she owns actual furniture). There’s not much to either of them individually beyond a few simple traits, and they barely evolve as a couple over the course of the film, which spans several months. They seem doomed from the start, and all we can do is watch and wonder why they ever bothered beyond the giddy rush of great sex.

Stan and Gough enjoy a fun flirtation in the beginning, though, as ex-pats in their mid-30s meeting cute during an Athens summer dance party. The fact that they kiss intensely before they even learn each other’s names, as music thumps and bodies bump all around them, is a great indication of the volatility that’s in store (and Papadimitropoulos puts us right in the center of the action through a long and immersive tracking shot). Mickey has been DJing in the city for the past seven years, having fled New York just as his band was on the rise. Chloe is an immigration lawyer who’s on the verge of returning to the United States after 18 months. But when they meet on that fateful Friday, it seems highly unlikely that they’ll say goodbye and go back to their normal lives by the following Monday.

The script from Papadimitropoulos and Rob Hayes uses a series of Fridays as its structure—some joyful, some painful, but all eventful in some way to mark the passage of time as this unlikely relationship lives on, with the inevitable return to reality on a Monday lurking in the distance. Hence, the title. But that sensible breakup remains at bay, and we keep wondering why as it grows clearer that these two people truly aren’t meant for each other. A party they throw to meet one another’s friends goes amusingly, horribly wrong as it becomes obvious just how different Mickey and Chloe are based on the company they keep. Both groups are obnoxious, to be sure, but in contrasting ways: Her pals are posh jerks, his are brash boors. There isn’t a single person in this movie you’d want to spend a significant amount of time with, and yet, here we are.

But a couple of scenes do shed some light on who these characters are—or rather, who Stan’s is. The Irish theatre actress Gough, for all her vibrant physicality, is more of a passenger, which is odd given that she’s playing the responsible go-getter of the two. One of them occurs when a former bandmate of Mickey’s (Dominique Tipper)—who’s now achieved some measure of solo success—comes to town to play a gig and makes him doubt his hedonistic lifestyle. Stan, best known for his role as the Winter Soldier in the Marvel Cinematic Universe and Jeff Gillooly in “I, Tonya,” gets a rare chance to show some romantic-lead magnetism as well as dramatic subtlety, so much so that it makes you wish for stronger material for him.

The other scene, which is the film’s best, occurs when Chloe meets up with Mickey’s ex-girlfriend, Aspa (Elli Tringou), who’s also the mother of his six-year-old son, whom he never sees because he’s such a flake. (His feelings toward fatherhood, an attribute that’s supposed to give him depth, remain frustratingly ill-defined.) Chloe arrives at the restaurant on Mickey’s behalf to help negotiate some sort of joint custody agreement, both as a lawyer and as his current girlfriend, and the tension and brutal honesty between them gives “Monday” a much-needed jolt of energy. “Mickey’s a baby,” Aspa tells Chloe. “He’s a little boy.”

Despite the dazzling, sun-soaked scenery, the long nights of partying and the sight of these attractive actors stripping themselves bare—physically and emotionally—for their roles, the harsh truth of Monday, and its accompanying hangover, comes all too soon for us.

Now playing in select theaters and available on digital platforms and VOD. 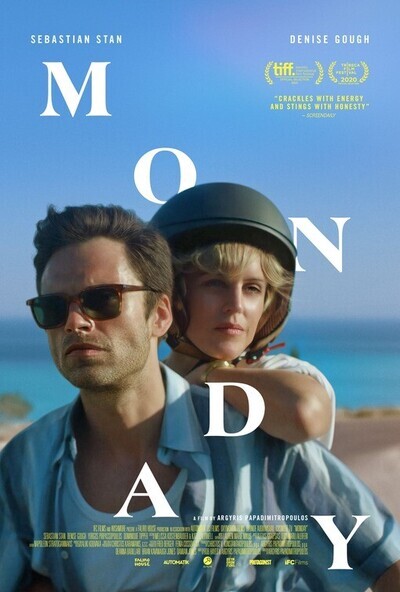