“Mister America” is one of those cult TV adaptations that could be reviewed in practically another language, and not because its origins go nearly a decade back to a “Siskel & Ebert” parody show called “On Cinema at the Cinema.” That web series was just the beginning for a meta-comic, inside-joke-filled universe that saw co-hosts Tim Heidecker and Gregg Turkington playing themselves in other spin-off shows (“Decker,” and the unjustly canceled-by-Tim “Decker vs. Dracula”), Oscar night webcasts, and later, a four-hour murder trial special. “On Cinema” is committed to its bits, the latest example being a full-length fake doc about Tim’s latest scheme. Depicting Tim's Trumpian grassroots campaign for district attorney, “Mister America” ambles through two overlapped realities (“On Cinema”’s and our own) and reveals a pathos that makes its dry political comedy accessible beyond an ingrained fanbase, if not poignant.

Director Eric Notarnicola (sharing co-writing credits with Heidecker and Turkington) captures Tim after having just beat a case involving 20 vaping-related deaths at an EDM festival. Power-hungry and spiteful as always, Tim decides to run for district attorney of San Bernardino against the D.A. (Don Pecchia’s Vincent Rosetti) who tried to put him in prison. It quickly becomes apparent that Tim doesn’t know what he’s doing—he doesn’t even live in San Bernardino—and that his saving grace is his campaign manager Toni Newman (Terri Parks), who does most of the work. With a sense of narcissism meant to be equally recognizable and pathetic, Tim sets himself up for failure, yet again.

Tim’s more immediate nemesis is Gregg Turkington, his “On Cinema” co-host, where the two hilariously embody the worst breeds of film critics: Tim praises every movie with hopes of Hollywood loving him back; Gregg praises every movie because he loves film and nothing else. As “Mister America” shows in brief but helpful flashbacks to earlier “On Cinema” seasons, they now have a contentious, elastic relationship that always brings them back into the same mess. Some of the funniest scenes in “Mister America” involve Gregg and Tim trying to embarrass the other in front of the documentary crew, like whenever Gregg posits that Tim’s campaign is just like a real-life adaptation of “The Shaggy D.A.”

Notarnicola maintains strong pacing with his nuanced portrayal of failure, especially as election day approaches with no strategy in sight. In subtle but compelling scenes where Terri Parks’ Tony Newman depicts perhaps the most earnest person to be run over by Tim’s destructive schemes, the campaign falls into pathetic corruption, and Tim pacifies himself with cheap beer. These passages say little about the political process, which feels like a missed opportunity—the film also teases a “hidden camera in local campaigns” approach that's not fully realized, despite a few big laughs when Tim interacts with real citizens of San Bernardino.

But this is largely a showcase for Heidecker, and his serious talent of being able to create a character right in front of the camera. His Heidecker character is inspired by a titanic source—Trump, unmistakably—though the impression is not built from a squinting face or Dorito tan. Instead, it’s the way he constantly stumbles through simple sentences, very awkwardly singles out people of color when chatting up constituents, or clings to the childish name-calling of his “rat” opponent. All the while, Heidecker is very good at making himself look awful, with a baggy brown suit that desperately needs a tailor, or when beaching himself on his hotel room bed couch, surrounded by fast food. It’s one of the most nuanced and cathartic riffs on our commander in chief, showing such grotesque behavior for what it is without a chorus to validate him.

Recognizing the film's many inside jokes will make “Mister America” even more rewarding, but those familiar with “On Cinema” will have the greatest advantage when it comes to the movie’s comedic rhythm. Anyone who has seen Tim’s four-hour trial, or watched eleven seasons where Tim and Gregg barely review movies despite rating most of them five out of five popcorn bags, knows that the humor of “On Cinema” is a slow burn through bizarre character quirks, which then lead to abrasive, hilarious story developments. True to previous form, “Mister America” is more of a relaxed, giggly character study than one that treats gags like clockwork. In a natural tonal shift, this restraint makes way for a melancholy rumination on Tim's self-destructive narcissism, which gives the film its ultimate staying power. For someone who has co-engineered a meta-comic creative style while always maintaining control of his name, self-awareness is essential. In this universe—and on the campaign trail—it’s a tragedy when you’re the biggest clown of them all. 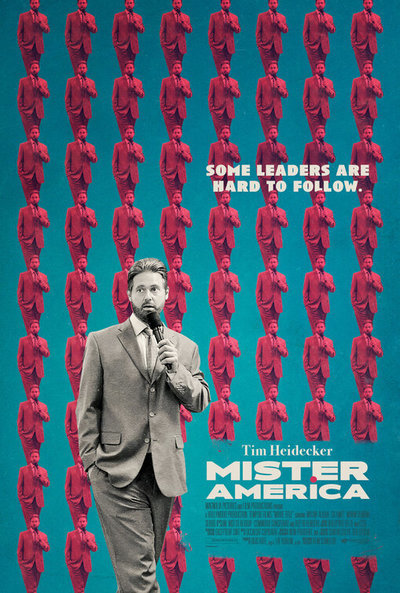