"Missing Link," a 19th century buddy picture starring an English explorer and Bigfoot, is the fifth feature from Laika, an animation studio that's as much a creature of its proper time period as the film's eight-foot-tall ape-man. Laika, who also made "Coraline," "ParaNorman," and "Kubo and the Two Strings," specialize in visually spectacular but psychologically intimate tales that are created with actual materials rather than computer pixels.

Hugh Jackman voices the hero, Sir Lionel Frost, who travels the world documenting myths and monsters. The film contrasts Lionel with the culture of his time, which made folk heroes of wealthy men who traveled to Africa and Asia to kill animals with guns and show off their stuffed remains. But just because Lionel is more eco-friendly than other men of his time doesn't mean he's nice. He's the first adult hero of a Laika film, and although Jackman makes him appealing, he's bad news on paper—a man-child loner with no attachments who uses others for money and favors, and is long overdue to mature.

After an opening sequence involving the Loch Ness monster that's more funny than scary (the creature's head is shaped like a golf club), "Missing Link" wastes no time introducing Lionel to the title character, a hairy giant who lives in the woods of the Pacific Northwest. Lionel is inspired to find the creature after receiving a handwritten letter encouraging him to do so. It turns out that the creature, voiced by Zach Galifianakis in kind of a Wallace Shawn/Patton Oswalt mode, is an autodidact who wrote the letter himself, having learned English through observation a la the creature in Mary Shelley's original Frankenstein. Known as Mr. Link first, then later as "Susan" (we never find out if Bigfoot is a boy or girl, and I'm not sure it matters; could this be the first non gender-binary major character in a big-budget children's film?), Lionel's new friend encourages him to travel to the Himalayas and find a Shangri-La-like city of Yeti, beasts that we're told are cut from the same biological cloth as Bigfoot.

And so Lionel and Susan embark on an even greater journey than the one that brought the myth-hunter to the states. There's a stop in Santa Rosa, New Mexico, where Lionel plans to filch a necessary map from an ex-girlfriend, the fiery adventurer Adelina Fortnight (Zoe Saldana), who of course ends up joining him and turning a duo into a trio. They board an ocean liner bound for Southeast Asia and travel on to the Himalayas, where of course they eventually find the city of Yeti (as if a kids' movie would promise such a splendid thing and then not provide it!). They're stalked along the way by Willard Stenk (Timothy Olyphant), an evil explorer and freelance assassin hired by Lord Piggot-Dunceb (Stephen Fry), president of the Optimates Club, an association of big-game killing adventurers. The Optimates' objections to Lionel are never made entirely clear. Nor is the idea that Lionel, a man of science who's fascinated by evolution, needs to evolve himself conveyed in enough detail to make it feel like anything more than a screenwriter's afterthought. (It felt a bit forced when "Jurassic Park" did it over 25 years ago, though its final shot of a flock of pelicans still resonates.)

Still, movies have a way of finding their own dramatic centers of gravity, and here that's the relationship between Lionel and Susan, an odd-couple comedy team for the ages. The most memorable scenes in "Missing Link" consist of little more than these new pals getting into ridiculous situations, fighting their way out of traps, and misunderstanding each other. (While trying to climb the high adobe walls of Adalina's estate, Lionel hands Susan a length of rope and says, "Throw this over the wall," which is not what you say to someone who, by their own admission, is "literal minded.")

Writer/director Chris Butler, who oversaw the memorable "ParaNorman," is working in more of a Wallace & Gromit, Aardman Animation vein this time. "Missing Link" is an old-fashioned adventure movie, more interested in characters, atmosphere, and eye-popping locations than in fight scenes and chases (which are nevertheless imaginatively designed and executed, especially one staged on a storm-tossed ocean liner, with characters racing through halls that have turned sideways). One of the more surprising and welcome aspects of the movie is its awareness of how long it used to take to get from one part of the world to another. The maps that chronicle the heroes' journeys tell you where they're going and how long it'll take them to get there, but "Missing Link" never rushes when it can amble. It makes sure to spend a fair amount of time in every significant locale, the better to establish how it looks and feels different from the last place.

The result is a narratively relaxed yet intensely tactile experience. By design, "Missing Link" lacks the video-gamey feel of so many contemporary cartoon films. It also lacks the reflexive smart-assness and seemingly mandatory slang and pop culture references that will be forgotten mere weeks after the movie's release. There isn't much to "get" at the level of plot or theme, but every frame has been built, composed, and lit with such care that I might try to see it a second time in a theater just to appreciate the look and sound of it.

The early sequences in the grubby logging camp near the woods where Susan lives are stunning examples of how to build miniature worlds that feel nearly as rich as our own. The "magic hour" shots at dusk and dawn are a velvety purple. A lateral traveling shot of Lionel and Susan walking from out of the woods and into the camp takes them past stacked-up remains of redwoods; the whorled tree stumps of various diameters are arrayed so that they evoke the paint vortexes in the sky in Vincent Van Gogh's "The Starry Night." The end-credits sequence shows how much work went into creating a single shot of a carriage traveling through a forest, with intricately fabricated trees, greenery, roads, hills, and fully pose-able characters, the only green-screened element being a background of a mountain range.

Watching "Missing Link" feels less like watching the typical Pixar, DreamWorks or Blue Sky film than reading a pop-up picture book to a child at bedtime, examining a series of moving dioramas, or going to a kid-friendly gallery where you're allowed to touch the art. It's pretty low-stakes compared to the kinds of movies that end with the fate of the world (or the universe) hanging by a thread, but that's a feature, not a bug, and there are worse things than sending viewers home with smiles on their faces. 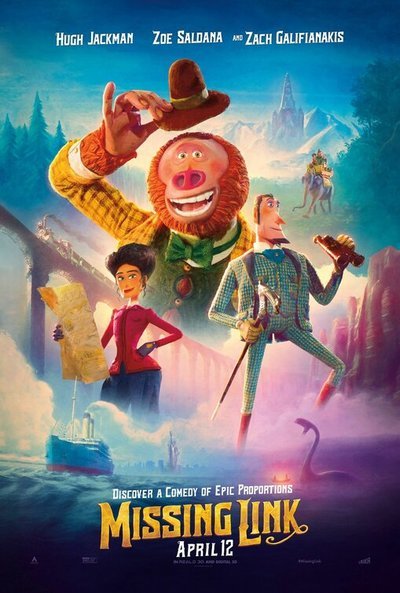 Rated PG for action/peril and some mild rude humor.

Emma Thompson as The Elder (voice)