The fact that “Midnight Traveler” even exists is a bit of a miracle.

Afghan filmmaker Hassan Fazili and his family shot the documentary entirely on three mobile phones while on the run from the Taliban, which had put out a hit on him. Throughout their arduous, often terrifying trek across three years and 3,500 miles in search of asylum, they kept shooting. While hiding in the forest with smugglers or cramming into the cramped quarters of a refugee camp or sleeping on cardboard slabs in a half-built building beneath a flutter of snowflakes, they kept shooting.

That Fazili, his wife and their two young daughters had the presence of mind to document their trials no matter the circumstances is stunning – and it leads to some internal ethical debates along the way. But then the next difficult step was keeping the footage intact and assembling it into a cohesive and compelling narrative, which director Fazili did with the help of writer-editor-producer Emilie Mahdavian. The result is bare bones and straightforward but the drama more than speaks for itself, and it achieves its mission of putting an intimate, human face on a seemingly overwhelming, faraway subject.

From the start, one of the more relatable motifs in “Midnight Traveler” is how Fazili and his wife, fellow filmmaker Fatima Hossaini, try to make life as normal as possible for their daughters: Nargis, who looks to be about 7 at the film’s start, and toddler Zahra. The kids squirm impatiently in the back seat of the car during the primary journey from Tajikistan, where the family had been living for the past 14 months while applying for asylum, and Fazili’s hometown of Mazar-i-Sharif, Afghanistan, where they must return briefly before setting out in earnest. Zahra cuddles on her mom’s chest. Nargis look out the window at the vast, endless stretches of dry, desolate nothing. She’s bored. Later, at a refugee camp in Sofia, Bulgaria, she will cry big, convulsive tears of boredom, but her underlying angst and fear are palpable. Still, they could any family on any road trip to any tourist destination.

“Midnight Traveler” follows the Fazilis as they travel from Afghanistan through Iran, Turkey, Bulgaria, Serbia and finally to Hungary, where they’re held in a transit zone that looks more like a prison while awaiting a response to their case. Barbed wire fences surround harsh metal buildings with the surreal sight of a swing set sitting in the middle of the gravel ground. Along the way, we witness challenges large and small: riots in the city streets and bedbug bites in the sheets, the threat of kidnapping and the ache of an ankle injury.

You’re engrossed in the drama of it but you’re still frequently reminded that you’re watching a movie, that there are actual people capturing these images and that they’re making decisions not just about what to include but how. One of the film’s more compelling conflicts is also its most prosaic: a jealousy-fueled tiff between husband and wife. At the Sofia refugee camp, Fazili has complimented a teenage girl who’s a family friend on her looks. The feisty Fatima tells him his remark is totally inappropriate on a number of levels. As their conversation escalates, she insists he stop recording, which he finds surprising and even appalling: “You’re supposed to be an artist,” he argues. “A filmmaker.” At this point, we’re not even two months into their journey.

But while the creative drive is clearly on display, the emotions behind it remain a bit of a mystery, Granted, Fazili is behind the camera much of the time as he’s occupied with telling the story that’s unfolding around him. But “Midnight Traveler” might have carried an even greater emotional wallop if we had a greater understanding of the feelings of the filmmaker whose work has endangered the lives of the people he loves most.

The pervasive sense of misery makes the bursts of pleasure that much more joyous: the girls playing a make-believe game with kids who speak various languages at a refugee camp, or building a makeshift “Christmas man” out of snow and twigs. And when Nargis sings along to a video of Michael Jackson’s “They Don’t Care About Us” on dad’s phone – the few English words she knows – and busts out some of Jackson’s signature moves, it feels like more than just a kid connecting with a catchy tune. It’s a battle cry for people like her whose troubles get swept under the rug if they’re acknowledged at all. “Midnight Traveler” is a step toward changing that. 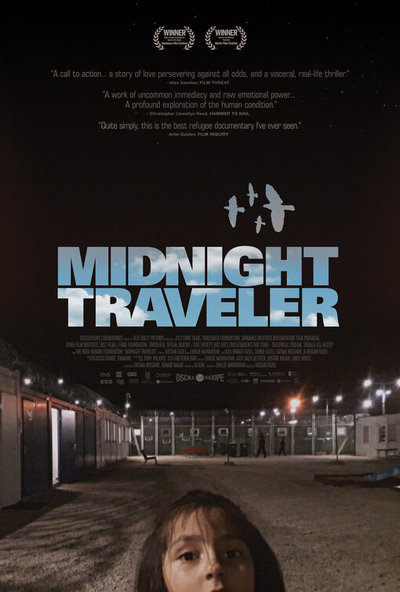 Hassan Fazili as Himself

Fatima Hussaini as Herself

Nargis Fazili as Herself

Zahra Fazili as Herself