Middle School: The Worst Years of My Life

For what amounts to a 90-minute sermon for the Nickelodeon set that pillories standardized testing, mandated conformity and bullies of all shapes and sizes, “Middle School: The Worst Years of My Life” is better than middling as it sidesteps the trap of simply pandering to its youthful demo with cheap laughs and silly mugging.

The story, based on a popular series of books co-written by crime thriller novelist James Patterson, follows a misfit kid with an anti-authoritarian streak who dedicates himself to breaking every one of the 100-plus petty rules (ranging from no loitering in the halls to no inappropriate written material) in his new school’s “Code of Conduct” handbook. In the process, this gently humorous if lightweight diversion capitalizes on the pleasantly restrained performances by its teens-and-under cast and only occasionally trips over itself by stating the obvious.

Although it might be hard not to avoid such comparisons, don’t expect hero Rafe Khatchadorian (ultra-relatable Griffin Gluck from TV’s “Private Practice” and “Red Band Society”) to come off like a latter-day Ferris Bueller. Whereas everyone’s favorite ‘80s truant relied on his smarts to invent excuses to skip school and camouflage his scams, Rafe is more of an introverted type who finds escape by using his imagination to draw a fantasy world of cartoon monsters, space creatures and humanized animals that now and then come to animated life onscreen. In other words, one’s a con artist, the other a creative artist.

Actually, there is one thing that “Middle School” has in common with the 30-year-old “Ferris Bueller’s Day Off”: The assault and battery of a cherished red car.

Not that everything is perfect. “Middle School” manages to pretty much waste the presence of Lorelai Gilmore herself, Lauren Graham, as Rafe’s well-meaning single mom by having her fall for one of Hollywood’s go-to personifications of smarmy male oafishness, Rob Riggle, as her boorish fiancé. The family pug dog (named Mr. Giggles, though I swear I heard one cast member call the pooch by his real name, Calvin at some point) is not exactly blessed with abundant canine charisma. But more dubious is a late-arriving left-field reveal that briefly drags the narrative into highly manipulative maudlin territory that it hasn’t quite earned.

Still, the fact that somehow Steve Carr—whose previous directorial output includes such landmarks of cinematic lameness as “Paul Blart: Mall Cop,” “Daddy Day Care” and “Dr. Dolittle 2”—has managed to make a watchable family film is a miracle in itself.

The plot basically revolves around Rafe’s plan to avenge the confiscation of his precious sketchbook, taken away and destroyed by the self-promoting, law-and-order-obsessed lout of a persnickety Principal Dwight (Andy Daly). Just as Rafe has an enabling partner in crime, Leo (Thomas Barbusca), to help pull off his prankish acts of undercover rebellion, so, too, Dwight has a sidekick of a vice principal (stand-up comic Retta) to assist in fighting back. Matters come to a head when Dwight, bent on maintaining his school’s No. 1 ranking in district testing, schemes to prevent Rafe’s fellow remedial students from taking the exam and potentially bringing down the average score.

Naturally, “Middle School” also finds room for puppy love as Rafe falls for Jeanne (Isabela Moner), the brainy, ambitious, eco-aware and cutely bespectacled girl of his dreams. Imagine this candidate for student council as a less cutthroat version of Tracy Flick. He also discovers an ally in his homeroom teacher (Adam Pally of TV’s “Happy Endings” and “The Mindy Project”), who is hip enough to reference rapper Drake and hip-hop’s Future in order to get the class to understand the principles of fair trade. And no adolescent movie male is complete without a sassy younger sis (Alexa Nisenson) to not just drive him crazy but, in this case, also help expose their mom’s boyfriend as the super creep he is. Meanwhile, “Napoleon Dynamite” fans will likely be pleased to see Pedro—actor Efren Ramirez—as the school’s put-upon janitor who joins forces with the students against the principal.

Much of the fun of “Middle School” comes from watching Rafe and Leo take pride in pulling off their secret stunts—plastering hallway walls with artful arrangements of multi-hued Post-it notes, jamming a closet full of colorful plastic balls, turning a trophy case into an aquarium—but none are that destructive or mean-spirited as far as acts of vandalism go.

One final observation: I am finding any recent movie that features characters of the masculine persuasion who unfairly badger opponents while spreading rumors and lies for their own gain can’t help but summon thoughts of a person of interest who is regularly in the news. To my mind, that isn’t a bad thing, especially if it shows the consequences of such behavior. After all, if a film about education doesn’t teach you something, what will? 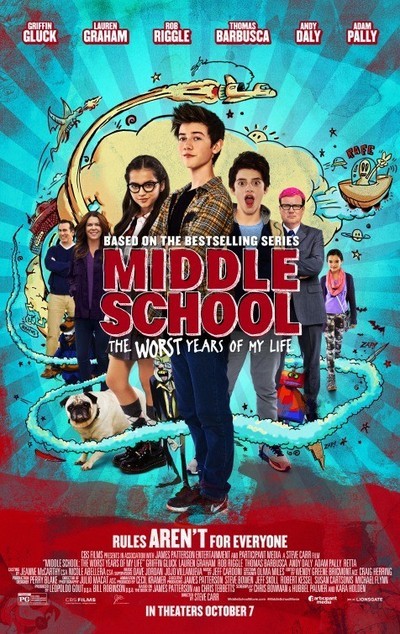 Rated PG for rude humor throughout, language and thematic elements.