Michael Jackson's Journey from Motown to Off the Wall

"Michael may be the purest talent I've ever seen. He's incapable of a false moment."
- Director Sidney Lumet, on Michael Jackson in "The Wiz."

Michael Jackson, along with his almost otherworldly talent, was always one of the most emotional performers. In the pantheon with James Brown, Judy Garland, Jackie Wilson, and a handful of other electric live performers, Jackson's onstage persona and performing ability was akin to the Big Bang, there was no end to the expansion. People responded to him personally, and, because he started out so young, a generation grew up with him, identified with him, watched in awe at his transformations. Spike Lee's documentary "Michael Jackson’s Journey From Motown to Off the Wall," premiering on February 5th on Showtime, is as emotional as its subject matter. Kobe Bryant, interviewed in the documentary, says at one point, "It's easy for people to get sidetracked. They talk about his complexion. They don't focus on what this man was, and how he was that." What with the tabloid frenzy of Michael Jackson's life, not to mention his early death, Lee's documentary is a welcome corrective as well as an almost aggressive act of redress and celebration. It does not get "sidetracked." It's about Michael Jackson's work, and how he worked. Maybe most pleasingly, it's a track-by-track history lesson of Jackson's 1979 album "Off the Wall," an album that still gets so much radio play today that if you didn't know better you might think it was released last weekend.

The plot points of Jackson's early life (the rise of the Jackson 5 on Motown, their jump to Epic, Michael emerging as the solo star, culminating in Off the Wall) may be well-known to those who grew up in that era but Lee presents it in a way that passes the information on to a new generation. When there is an artist as big as Michael Jackson was, as important, as ... improbable, really (and it's more improbable the more you learn), it's essential that an understanding of the achievement of that art is passed on (especially to kids who may only know him as the weird man in sunglasses on the cover of every tabloid). A film like Lee's says: "See what he did? See how much space he created for others? For you? Honor that."

Format-wise, the documentary is pretty standard: fun archival footage of concerts and cartoons and interviews, beautiful still photographs, and lots of interview subjects. Quincy Jones, Motown's Berry Gordy, Philadelphia soul producers Gamble and Huff, Ron Alexenburg at Epic, Marlon and Jackie Jackson, all provide background for the Motown years, the Epic years, for the explosion of the Jackson 5 as a worldwide phenomenon.

Counterpointed against the professional memories of Jackson's colleagues, are the voices of those inspired by Michael Jackson, including Lee himself. Lee Daniels ("He's everything I aspired to be"), David Byrne, Mark Ronson, Rosie Perez, John Leguizamo, Questlove, Misty Copeland, Kobe Bryant, Pharrell, John Legend ... all weigh in with memories of what he meant to them, how he pushed them to be better in their own work, try harder, work harder.

What happens as you listen to the chorus of voices is that a different kind of story starts to emerge. Talent is one thing. Michael Jackson obviously had that. But he was not just a raw genius who knew how to sing and move. Even as a child, he approached his work (and the Motown giants around him) with curiosity, inquisitiveness, and an insatiable desire to learn from them. He himself said that the key to success was "listening." The documentary pays tribute to his dancing as well as his singing. Jackson was a prodigy dancer, obsessed with The Nicholas Brothers, Fred Astaire, Gene Kelly, Sammy Davis, Jr., able to replicate their routines perfectly after watching them only once. What became his recognizable dance style had long roots in the culture, and his moves incorporated the whole history of American dance.

One of the most gratifying sections of the documentary is the in-depth "Off the Wall" discussion, song by song by song: the "hooks," the rhythm sections, the horns, the guitars. Musicians reminisce about playing on that album, and contemporary musicians talk about the impact that this or that specific sound had on their own work. It's so rich and so informative that the moment I finished watching the documentary I listened to the album front to back. I grew up with Michael Jackson. I have all the albums. It may sound trite, but watching all of the footage in the documentary, the concerts, music videos, television appearances, his beautifully simple performance of "Ben" at the 45th Academy Awards, at age 14, drives home just how much we lost when we lost him.

The other element of Michael Jackson's career that becomes crystal clear in the documentary is the fact that nobody—not even music industry people who thought Michael Jackson was talented—could perceive just how big he was going to get. How many cute child-stars go on to become as huge an adult star as Michael Jackson? Who could even envision something like that? The perception of the Jackson 5 was that they were very successful, but they were a "packaged" commodity, a novelty act. A lot of the people at Epic didn't want them on the label. Campaigns on their behalf had to be fought all along the way, as insane as that sounds now.

Michael Jackson's career is a powerful example of what it looks like when an artist loves what he does. It's a high bar, but that's as it should be. If you don't approach your work like that as an artist, why do it? It's a concept brought up again and again in the documentary, perhaps its most emotional component. How many music stars today barely seem to like what they're doing, let alone love it? The documentary is a reminder, and an important one, about what Michael Jackson brought to the table, and it was more than talent, it was love. That is what audiences felt when they watched Michael Jackson, and when they listened to his songs. It's why Rosie Perez almost tears up in her interview, talking about her sense of "thankfulness" to him because of how much joy he brought to her life. Exquisitely researched, beautifully put together, with that celebratory knowledgeable chorus of voices pouring over us, what Spike Lee's documentary really is is an act of love. 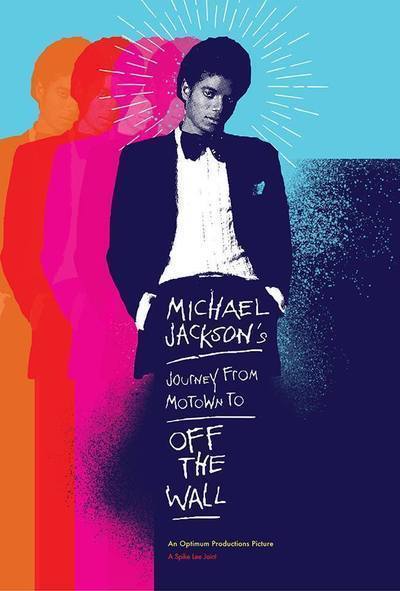 Michael Jackson's Journey from Motown to Off the Wall (2016)

Michael Jackson as Himself