Italian drama "Mia Madre" is an either/or film, a humorous and poignant character study that frequently becomes an ensemble piece. Filmmaker Margherita (Margherita Buy) may be the main subject, but sometimes supporting characters like Margherita's brother, Giovanni (Nanni Moretti, who also directed and co-wrote the film) quietly take over Margherita's story without her realizing it. "Mia Madre" is, in that sense, the rare character study that doesn't just treat other protagonists as if they are of secondary importance. That generous attitude embodies Margherita's confusing-sounding advice to her actors: "The actor must perform beside their role." It also explains Moretti's understanding and presentation of Margherita's crisis as an artist in the middle of one that is also personal.

When we meet Margherita, she's already breaking down. Her problems are only exacerbated—not created—by her mother Ada's (Giulia Lazzarini) hospitalization and inevitably worsening health condition. Likewise, Margherita's problems aren't caused by a creative block she's experiencing while filming an uplifting drama about a union strike starring incompetent, boisterous American actor Barry Huggins (John Turturro). Margherita is really concerned with what will happen next. She's not just a repressed artist with unexamined trauma, though she is that. She's a harried parent with an estranged teenage daughter (Beatrice Mancini), a shy caregiver who doesn't want to step on her brother's toes, and yes, a director whose exasperation is just as apparent in her pensive gait as it is in her uniquely Mediterranean hand gestures and periodic temper tantrums. Margherita is that rare female lead whose problems and responses are so universal that she's never patronizingly defined as a woman in crisis.

Case in point: Margherita suffers from waking nightmares that steadily intensify until they climax with a frighteningly realistic dream about Ada wandering off into traffic. These dream sequences all seem real enough, and hint at Margherita's recurring fears of losing her mother. In one scene, Margherita tries to comfort Ada only to discover that she's still on set. In another scene, she asks Giovanni what's wrong with Ada, only to discover that Ada has already died. In each of these dreams, Margherita performs her grief as if she were on a private stage with invisible cameras.

These dream sequences make the sudden—but relatively unonstentatious—intrusion of scenes from other characters' lives feel like an organic extension of Margherita's preoccupied thoughts. These asides suggest that Margherita is worried about, but not able to take care of all of the people—including the hilariously inept Barry—she cares about in her life.

That inclusive spirit is what makes "Mia Madre" so sensitive and charming. Take for example the scene where Barry keeps flubbing his lines and eventually screams that he plans on retiring, and needs to "go back to reality." Barry's a clod throughout "Mia Madre," so it's always exciting to see that he's not just a punching bag for Margherita. When Barry smashes a cafeteria tray to the ground, he's not just acting out: he's struggling to take control of his narrative, and assert himself in the same way that Margherita does throughout "Mia Madre." He's just as impotent and bewildered as she is, a character actor trying to become a leading man in a story whose lines seem familiar but are still impossible to nail.

Turturro does an amazing job bringing humanity to what could have just been a minor role. But while he threatens to steal every scene from Buy, she carries the film. For proof, watch the scene where she quietly walks off of her movie's set after receiving bad news about her mother. The moment passes in an instant, but it's just as real and devastating as the one where Margherita shuts down and then tears up with her mother after Ada protests that she's not strong enough to walk away from her hospital bed unaided. "Mia Madre" is unassumingly powerful. It initially feels like several stories wrapped into one, but ultimately coheres into a tragedy about one character's inability to see outside of herself. Don't miss it. 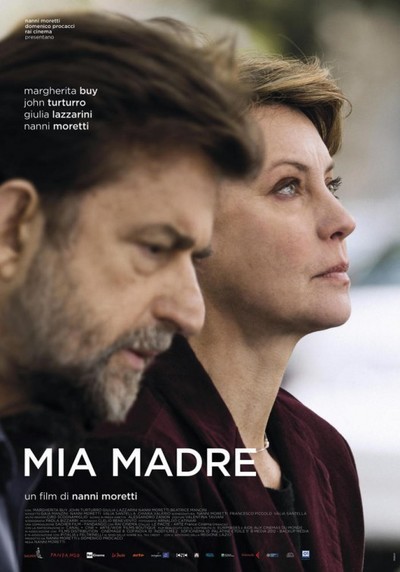