“Mega Time Squad” feels as if it were made in 1981 by Empire Pictures. Had it been, the 11-year old version of your humble reviewer would have snuck into it with my cousins. We would have sat through it twice, just to pass the time, and we would have concluded that it wasn’t very good. In fact, we would have considered it “pretty damn corny.” That it made absolutely no narrative sense would not have concerned us; continuity and coherence were for critics and grown-ups. Our mission was simply to get out of the house to see something rated R.

The R-rating has long since lost its forbidden glitter, but I still retain a tween boy’s affection for movies that dare to be this goofy. Writer-director Tim van Dammen haphazardly stuffs “Mega Time Squad” with a litany of elements pulled from a genre grab bag: there’s an incompetent crew of criminals, some questionable Asian mythology, a magic time-travel bracelet, a splash of kung fu and the promise of a badass demon that likes to eat people before ultimately consuming itself. That last item really piqued my interest, though all I got for my troubles was a reminder that I haven’t outgrown my younger self’s gullibility.

More on the demon later. The aforementioned crooks are guys with names like Damage who report to a Mr. Big called Shelton (Jonny Brugh). Shelton is concerned about a Chinese gang muscling in on his territory in Thames, New Zealand, so he tasks one of his runners, Johnny (Anton Tennet) to rob and intimidate the newcomers. Shelton’s crew includes his sister, Kelly (Hetty Gaskell-Hahn), whom we first meet while she’s making a vest full of explosives. As Chekhov would have theorized, if an exploding vest is introduced in the first act, it must go off in the next act.

While we wait for that earth-shattering kaboom, Johnny and his mate decide to rob the Chinese gang, double-cross Shelton and keep the money. This goes awry as expected, with Johnny’s mate ratting him out. It looks dire but Johnny has an ace up his sleeve, or rather, a magic bracelet on his wrist. During the heist, Johnny swiped it, but not before the old Chinese man they were robbing issued a warning. The bracelet is some sort of teleporter that, if used improperly, will land the wearer in the belly of a hungry, vengeful demon. Johnny thinks it’ll make the perfect gift for Kelly, and why not? What gal can resist a hot bracelet that’ll get her killed by supernatural forces?

The bracelet is a major plot point in “Mega Time Squad,” so it’s disappointing that van Dammen’s script doesn’t concern itself too much with its time-travel mechanics. Additionally, Johnny and the other characters are way too nonchalant about the magic this piece of jewelry possesses. For example, Johnny is barely concerned when he runs into an exact copy of himself during his escape from Shelton’s henchmen. “Press the bracelet’s button,” the other Johnny tells him. “You’ll know when to do it!”

When Johnny presses the button, he hops back in time or reboots it or something, causing a new copy of himself to be created. Again, none of this seems to faze Johnny, though he uses his newfound skills to re-enact scenes that have less than pleasant original outcomes. The other characters don’t seem too bothered by Johnny’s multiplicity either. Kelly isn’t even faze when, in the film’s sole nod to fellow New Zealander Peter Jackson’s early career gorefests, she gets splattered with Johnny’s exploding head.

By the time we get five or six Johnnies, “Mega Time Squad” can’t keep them, or its logic, straight. It’s a waste of a potentially good idea, most notably when the numerous iterations of Johnny start to turn on one another. The fact that Johnny is so neurotic that he can’t even trust himself is a detail that could have been milked for maximum returns, but the script barely scratches the surface. Tennet does a good job acting opposite himself, but his work is ultimately for naught.

I can’t recommend “Mega Time Squad” but it does have a few things going for it. It moves fast enough to stave off boredom and runs a crisp 79 minutes. Mike Newport’s synth-heavy '80s retro score is enjoyably nostalgic and catchy. The performances are decent for the most part, and the dialogue is often tasteless and funny. People get gruesomely shot, but the film’s most effective weapon is a rinky-dink slingshot. The special effects are serviceable, which leads me to that demon.

Early on, we’re treated to a flashback that explains the demon’s legend. It isn’t shown, but its bloody handiwork is alluded to from just outside the frame. I admit I was excited and couldn’t wait for it to join the current day plot. Now, I won’t tell you what happens when it shows up, nor how big a fool it made of me when it did. I’ll just say as far as demons are concerned, it’s pretty damn corny. 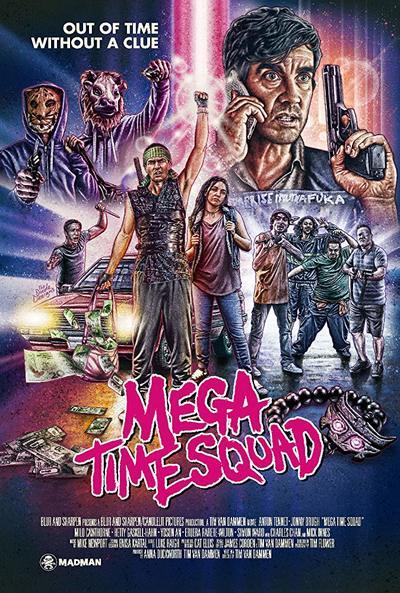