“Meeting Gorbachev” is not a traditional bio-doc and it’s not only because its co-director, the inimitable Werner Herzog, doesn’t make traditional bio-docs. Yes, this film contains the occasional Herzogian tangent, but what’s more interesting is how much Herzog makes himself a part of the process. Even more than usual, we hear his voice and see him on-screen, seated across from one of the most important world leaders of the 20th century. What makes “Meeting Gorbachev” most interesting is the way we see Herzog shape the narrative through his questions, narration, and filmmaking skills. He skips over certain chapters of Mikhail Gorbachev’s life and focuses heavily on the way the Russian leader fought for reform, particularly of the nuclear variety, and how his efforts have impacted the world today. As one might imagine from one our most humanist documentarians, “Meeting Gorbachev” isn’t dense with political dissection as much as it uses Gorbachev’s time in office as a commentary on nuclear proliferation and the issues that combat world unity.

The problem with “Meeting Gorbachev” is that I’d almost rather hear Herzog discuss what he learned reading his subject’s memoir than from the man himself. Sadly little is gleaned from the actual interviews that make up the bulk of the film, and it’s remarkable how much Herzog is able to turn relatively dry, unrevealing conversations into something that works as well as this does. He often cuts to other experts and even those who worked in the Reagan administration to offer context and insight that it seems Gorbachev isn’t quite capable of providing. And it’s unclear if it’s an issue of translation, but there are a few times when Gorbachev seems to answer a different question than the one that’s asked. At one point, Herzog wants to dive deep into why nuclear proliferation even exists when we know it could destroy the planet, but Gorbachev seems to think his interviewer is suggesting that he didn’t do enough to limit it. A similar wall goes up in a conversation about Helmut Kohl.

At the beginning, “Meeting Gorbachev” hits some of the expected biographical beats, showing us photos of Gorbachev as a young man and hearing about his farming family background. There’s an interesting section in which it’s clarified how much Gorbachev was a man of the people early in his political career, literally walking from village to village and revolutionizing farming equipment. It helped him become a popular leader, but also aided in the humanism that was the foundational elements of Perestroika and Glasnost.

When “Meeting Gorbachev” gets to its subject’s time as the last leader of the Soviet Union from 1985 to 1991, Herzog fluidly moves from major beat to major beat. If anything, one wishes some of these discussions went on longer. For example, they discuss the turning point of Chernobyl, both in what it did to the country’s national image and how it dismantled some of the power structure of the nation, but they move on very quickly. Think about how much the world changed from 1985 to 1991, and you realize that it could fill a mini-series, but Herzog keeps his film light and almost playful, noting how regional newscasts barely covered the fall of the Iron Curtain, playing footage of one that led an evening news with a story about slugs in a way that’s remarkably Herzogian.

If you go into “Meeting Gorbachev” expecting a hard-hitting look at the fall of the Soviet Union, you’ll be disappointed. It's telling that Herzog ends his piece with a look at the relationship between Mikhail and his wife Raisa. It’s the human element of this world leader that he’s trying to tap, without ever feeling manipulative or sentimental about it. And one of our best filmmakers does that here in a way that only he can. He captures a man who tried to change the world and did so in ways he couldn’t have predicted. But what makes it interesting is how Herzog gets to what he cares about in this story as much as the historical details themselves. It could just as accurately be called “Meeting Herzog.” 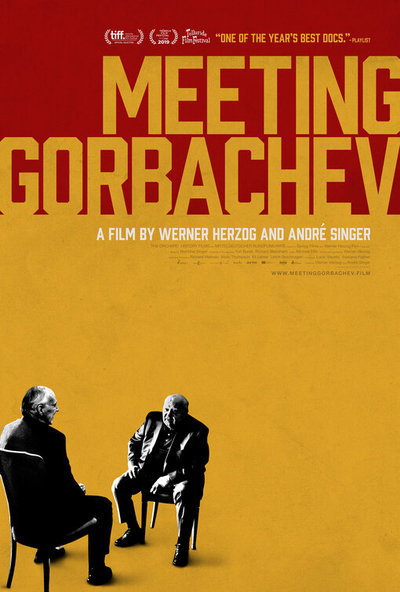 Mikhail Gorbachev as Himself

Ronald Reagan as Himself (archive footage)

Margaret Thatcher as Herself (archive footage)

James A. Baker as Himself (archive footage)