"Meander" begins as many contemporary horror movies do, with a bleak landscape and determinedly moody music, in this case a turgid, overwrought faux blues adapted from the 23rd Psalm, sung by Shawn James. An empty road is seen in the deep blue color field, and in the middle of it lies Gaia Weiss’ Lisa. When she agrees to ride in a truck driven by beardo Adam (Peter Franzén), she confides to the man “I don’t want to die; I just want to see my daughter again.” This day would have been her daughter's ninth birthday. Heavy, leaning toward fatalistic. Hmm.

Lisa wakes up in a steel enclosure, wearing a clingy catsuit and a bulky bracelet with a bright time readout on it. She soon figures out she has to move through a series of cylindrical tunnels in order to escape death by fire, dismemberment, acid burns, drowning, and such. The grotty corpses of those who came before her sometimes turn up in her path. They’re very grotty. Soon she hears the voice of another human. He sounds like one of the Gumby Brothers in an old Monty Python sketch. She soon sets eyes on him. At first he looks like the “It's ...” guy played by Michael Palin who used to kick off each episode of the Python TV series. But wait ... it’s Adam.

Ok, I think I’ll leave the plot description be. For about the first 30 minutes or so, I was thinking that “Meander,” written and directed by Mathieu Turi, was going to be yet another exhibit in my ongoing case that contemporary horror is creatively and morally bankrupt. Additionally, my mind meandered to the realm of the plausible: where did these horror movie villains, I thought, come up with the money, equipment, and labor power to build these elaborate puzzle prisons? At least “Cube” was an allegory. And escape rooms are a business.

Still, the movie serves up some nifty imagery. The floating skull with a big metal eyepiece is interesting. There are some white-light sections of the tube that reminded me of “Phantasm.” “Phantasm” didn’t make a lot of sense either, so maybe I should cut this picture some slack. While Lisa is not a particularly interestingly drawn character, Weiss’ performance is quite committed.

Once I managed to lighten up a little—even as the movie itself refused to—I got some enjoyment out of it. Even as it lurched into territory recalling “Defending Your Life.” (Spoiler alert: maybe “Meander” IS an allegory.) The director and lead actor are French, and lately the French have tended to apply self-seriousness to genre stuff with more stress than usual. “Phantasm,” gnarly as it could get, always had an impish side, just as the monumental power of AC/DC is leavened by the sight of its elfin lead guitarist in a schoolboy uniform. “Meander" has no such sense of fun. But it offers some newish sights and shocks. 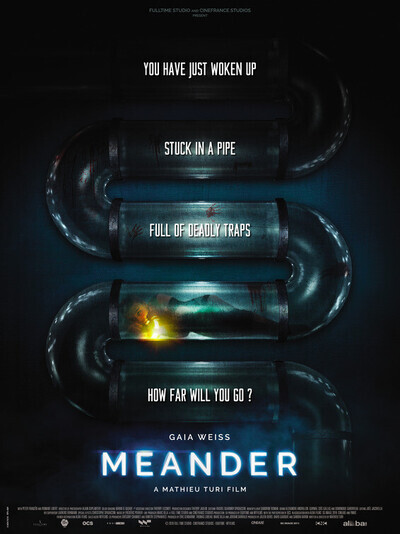