If the intimate Italian drama “Me and You” came from an unknown director rather than Bernardo Bertolucci, one of cinema’s modern masters, would it be seeing U.S. distribution? Probably not. With interest in subtitled films in a state of sad and seemingly endless decline, this tale of a boy and his half-sister who hole up in their father’s basement to escape the world might well feel too slight and marginal to attract the attention of art-house distributors.

But rather than suggesting why slight and marginal works might as well be avoided, the film points up the continuing benefits of an auteurist approach to cinema. Bertolucci is indeed a master, and “Me and You” evidences numerous thematic connections to his earlier work as well as constant proof of his distinctive gifts as a stylist. While it may not have the transformative originality of “The Conformist” and “Last Tango in Paris” or the epic scale of “1900” and “The Last Emperor,” its pleasures are sufficient to fully reward the attentions of Bertolucci admirers—and perhaps even draw some new fans.

Since serious back problems have rendered him unable to stand, Bertolucci has not released a film in nearly a decade. He might never have worked again, he has said, had he not discovered ways to direct from a wheelchair and found a subject in Niccolo Ammaniti’s novella amenable to his lack of mobility. For these reasons, and the fact that he hadn’t made a film in Italian in 30 years, “Me and You” has an air of renewal and understated ebullience that is one of its chief attractions.

In its early sections, the film’s story focuses on Lorenzo (Jacopo Olmo Antinori), a 14-year-old with a mop of tousled brown hair, a pimply and usually sullen face, and the first fuzzy hints of a moustache. The picture of contemporary adolescent alienation, the kid has a therapist who thinks he’s making headway, though it’s clear Lorenzo finds school a huge drag and home even worse. His dad buys him expensive gifts but is present only on the phone. His mother (Sonia Bergmasco), an attractive blonde, takes him out to an expensive restaurant, where he annoys her by asking if she would make love with him if they were the last two people left on earth—a droll flashback to the incest theme of Bertolucci’s “Luna.”

The kid’s only happy relationship is with his aged grandmother (Veronica Lazar), but she seems to be in her final days. When he half-jokes that he wants his coffin placed on top of hers, it gets at what he’s really after: total isolation. And he has a plan for that. When vacation rolls up and his mother drives him to the bus for a school skiing trip, he starts an argument that ends with her ejecting him from the car. He then returns to the old building where his family lives and secretes himself in the cellar, where he has constructed a hideaway that promises him a week in blissful solitude, listening to music on his headphones and fooling his parents with occasional phone calls.

But the idyll is almost immediately interrupted by the arrival of Olivia (Tea Falco), his older half-sister by a previous marriage of his father. She is 25 and model-beautiful but jittery and erratic in her actions. It’s clear that relations between the two have never been very good; there are resentments and grievances on both sides. His main wish, though, is simply to get rid of her, and at first he succeeds. She goes away, but then returns and threatens to scream loud enough to give away his ruse unless she gives her shelter. And it’s then that he learns sis has a particularly self-indulgent kind of sickness—she’s a junkie.

For over half of its length, the action in “Me and You” is confined to the basement where Lorenzo and Olivia hide out, and it’s almost as if Bertolucci chose to approach this as an interesting formal challenge: how to create an enclosed and claustrophobic situation that’s never static or boring. He and cinematographer Fabio Cianchetti accomplish this with constant changes in lighting and visual angles and Bertolucci’s trademark lexicon of varied and elegant camera movements. This is all not only subtly beautiful in itself, it’s also thematically and psychologically apposite: Because the outside world feels so oppressive and threatening to Lorenzo and Olivia, it makes sense that this place of confinement would feel hospitable, strangely inviting, even liberating.

It is a place, too, where they are able to find a kind of solidarity in their troubles, and perhaps even begin to see beyond them. Those familiar with Bertolucci’s work might expect that the attractive characters and close quarters here could point toward an erotic destination, as did similar situations in films ranging from “Last Tango” to “The Dreamers.” But Bertolucci is never one to remain stuck in the past. Here eros, the urge toward transcendence, is not sexual but psychological. It’s a matter of pushing past boundaries and finding healing in difficulty and self-renewal—much as this great director did in making “Me and You.” 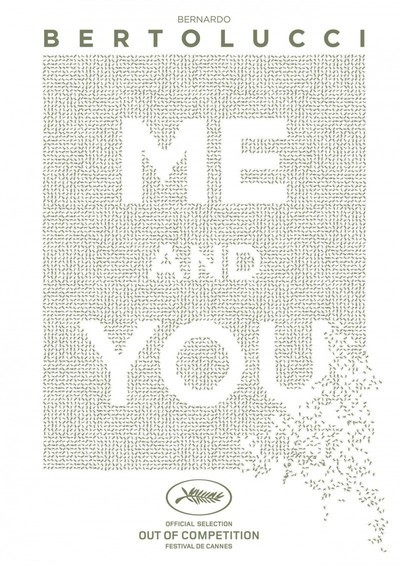