"Mayor Pete," a new Amazon documentary about Pete Buttigieg's run for presidency in 2020, runs somewhere between a commercial and raw profile. We could very well look back on it as the first presidential campaign for someone who would later take the office. But for now, it is a documentary of a politician's formation, of an Indiana mayor who states himself in numerous intimately captured moments that he's learning about campaigning while on the trail.

It’s also an interesting follow-up for director Jesse Moss, who previously co-directed the feel-good horror documentary “Boys State,” about a battalion of Texan boys acting just like real elected adults to get what they want from their fake governments. This documentary is decidedly less provocative, but it does get into what makes Pete Buttigieg tick aside from showing how well-spoken he is, under pressure, not just with talking points. Most of all, it makes a decent argument about his ability to lead.

“Mayor Pete” largely depicts this mini phenomenon in chronological order, following a campaign that made him a household name. The South Bend, Indiana mayor gained momentum and media attention after a CNN town hall, and then racked up surprising victories in the Iowa caucus, only to crash as swiftly as he rose. That last passage comes with more matter-of-fact nature, including the unceremonious way it ends. Moss captures it in a hotel room, with his husband and campaign mega support Chasten lying in bed. Chasten's support for his husband provides some of the documentary's sweetest scenes, and Moss' camera is a fly-on-the-wall.

Both the film's candid and public moments profile Buttigieg's unique background, given his comparably young age than his fellow candidates, his experience as a mayor, and his sexual orientation. But seeing him make public speeches, volleying different cynicism and homophobia with a politician’s calculation as inspiration music plays, is less interesting, even if it does color more about his campaign and who he is. Buttigieg is gifted at making talking points sound natural, and yet the effect of these scenes can be wholesale.

It's almost like the parts that show Buttigieg's flaws as a candidate can be more appealing, more revealing. "Mayor Pete" initially uses his experience in South Bend as a microcosm for his presidential campaign, but that becomes unfavorable when the locals' recent frustration about policing after a white cop shot a Black man named Eric Logan then echoes how Buttigieg has a low appeal with Black voters on the campaign trail. It's a problem that Buttigieg's campaign never really cracks, and it leaves ample room for imperfection. Moss’ editing gives some space to those who challenge him and are not satisfied, especially when it comes to people who are not satisfied with his answers about race, and his status as yet another white man who could be president.

It’s the more unique parts from Moss’ access that help give “Mayor Pete” the edge it tends to lack, like the scenes of debate prep, which have him taking barbed criticism about sounding too calm, or for sounding too rehearsed. These moments show the guts and gears within the process, and later they get a big pay-off when his debate performances are shown to improve, as detailed in a montage in which he’s shown countering the likes of Senator Elizabeth Warren or Representative Beto O’Rourke. He was media savvy on this campaign—he built that into his branch—and this documentary has a sharp eye in presenting that.

Intercut throughout are interviews in which Moss sits with Chasten and Pete in their home, asking him a few pause-generating questions such as “Do you think you’ll be president some day?” You can really feel when the film seems uncompromised by image. In one brief passage, Pete sits down in a booth at a restaurant, across from Chasten, who is slumped over, head in his arm. Chasten extends a pinky, a sign of life, and Pete reaches for it. It’s too lovely, too obtuse of an intimate moment to be just for the cameras (and echoes a similar passage where the two have a quiet ice cream date at Dairy Queen). When so many emotional beats can be broad in profile documentaries like this, you come to appreciate the vulnerable moments that other politicians would never want as part of their image.

Buttigieg's campaign was historic, and it was unique—Moss' documentary makes this point with scenes big and small. But it's telling when certain passages seem interested primarily in fortifying an image, a political narrative, and that can ring with a song choice (Lou Reed's "Perfect Day," mournful and on-the-nose here) or scenes that have little purpose than to show how electable Pete Buttigieg is. "Mayor Pete" has a compelling subject, but it's most gripping when it’s trying to secure your curiosity, not just your future vote. 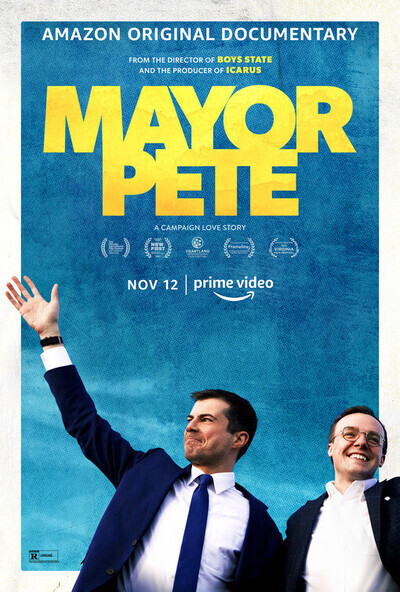 Pete Buttigieg as Self

Chasten Buttigieg as Self