Attain peace of mind before seeing "Mayerling." Compose yourself. This is a very long, slow, passive film, and it's going to be difficult to sit through. I guess it's worth it, though, for traditional kinds of reasons.

It tells a tale out of history. It's about beautiful doomed people. It is played by actors with grace and style: Catherine Deneuve (yes!), Ava Gardner, James Mason -- even Omar Sharif has style for a change. It has magnificent location settings, great scenery and costumes, spellbinding photography and, in short, everything except a story.

"Mayerling" is about the final days of the Austro-Hungarian Empire. All movies about the final days of empires have got to be filled with brooding irony; it's the custom. "Mayerling" broods overmuch. Its characters wander listlessly about Vienna, sighing and reciting bitter epigrams. "Be quiet," Ava Gardner says, "and after a while you will hear a noise. Perhaps a door closing or a spoon dropping. We are never entirely alone." Alas.

The situation is this. Franz-Joseph (James Mason) rules the empire with little thought for the future. His son (Sharif) complains he has no power and is a stuffed puppet. He falls in love with Catherine Deneuve. But the marriage cannot be because he's already married, for one thing. A royal scandal results. Emissaries in the night tempt Sharif with the idea of revolution.

He agrees: He will join in revolt against his father and renounce the throne. "Would you do anything for me?" he asks Catherine. "Yes, why?" she says. "Because I just have -- for you," he replies with brooding irony. No one with an undeveloped appreciation for brooding irony had better see "Mayerling" at all. 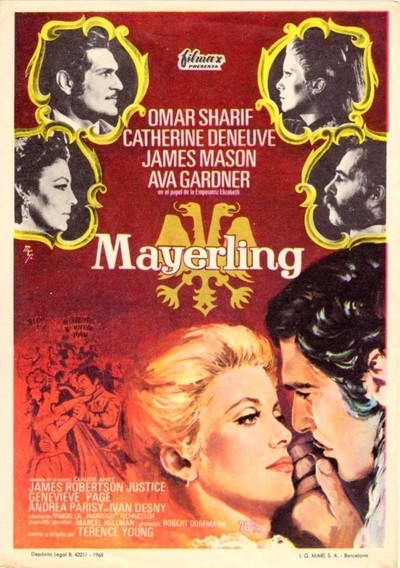