Taken as history lesson, tribute or some hybrid of the two, the HBO doc “Mavis!” is the rare type of success story that doesn’t put its subject on a pedestal. Here, the art form is deconstructed and the artist, singer Mavis Staples, remains a commanding messenger who speaks for people. In the case of "Mavis!," the accessible singer’s legacy is convincingly contextualized as a key piece of 20th century American music, especially as she led the Staple Singers, who started out as a late '40s gospel group, but evolved through movements political and musical.

Its 80 minutes proving worthy of decades worth of music, "Mavis!" examines the different elements behind the Staple Singers' sound, from their roots of gospel to the importance they had with Dr. Martin Luther King and the civil rights movement to their explosion into mainstream with “I’ll Take You There.” The doc's core concerns how the family band was the rare enterprise able to evolve with different genres of music, moving from gospel shows to folk fests to Soul Train performances, all while staying true to their sound, and keeping the gray-haired patriarch Pops as their lead singer and guitarist. The Staple Singers are a very rare case even by today’s standards, Mavis’ incredible lead voice notwithstanding. When this documentary starts interviewing her, sometimes in the back of a car, she is 75 years old, and has been touring for 60 years. Mavis is by all definitions a rock star, but this is not a regular rock star documentary.

Strange as it may sound, “Mavis!” is refreshing for actually being about the music, not solely the record sales or famous folk who can be name-dropped during such a saga. Yes, there are great nuggets in here involving Mavis’ young romance with Bob Dylan, a funny Curtis Mayfield zinger and some intergalactic studio footage with Prince in 1988. But it’s most exciting when "Mavis!" invests time into the mechanics of their music. The greatest picture is provided from finite examinations into aspects like Pops’ finger-picked guitar-playing, which scandalously mixed blues with gospel, or when the doc explores the often unspoken strategy behind a winning “gospel” performance (the saying goes, “if you ain’t shout at the people, you ain’t done shit,” according to music historian Anthony Heilbut). As they provide this rich background to these songs and their movements, such figures (including the likes of Chuck D and Bonnie Raitt) enliven the doc's intellectual atmosphere.

Director Jessica Edwards' filmmaking is wonderfully fine-tuned. In the moments that show Staples in modern times as an animated interviewee and even more electric vocal presence on stage (sometimes rocking out with her cane, or running her voice hoarse), “Mavis!” absolutely reverberates with its subject’s adrenaline and what she declares to an audience in the beginning as “posi-tive vibrations.” That energy defines the whole package, especially as Amy Foote’s editing bonds reflections on the past with expressions in the performances of the present. Adding to such immediacy is the cinematography from Keith Walker, which is welcoming by having a nice restraint with its subjects, like capturing a Levon Helm jam session (before he passed in 2012) with quaint intimacy, a wonderful scene at the end with her producer Jeff Tweedy (of Wilco) and an emotional Staples listening to a recording by Pops. Like the music of its subject, “Mavis!” has a confident beauty even in its most delicate passages. 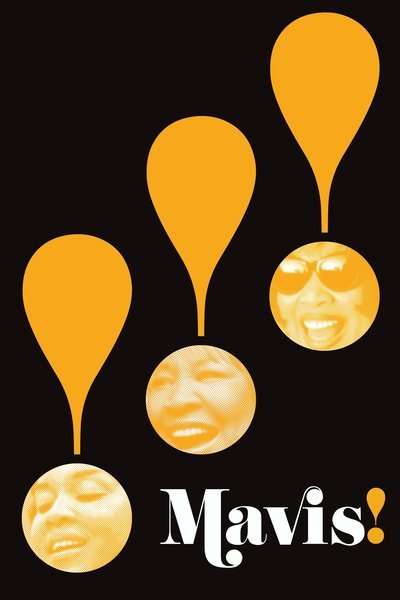 Mavis Staples as Herself

Julian Bond as Himself

Levon Helm as Himself

Sharon Jones as Herself

Bonnie Raitt as Herself

Jeff Tweedy as Himself