An out-of-nowhere triumph, "Mass" is the sort of American drama that you rarely see anymore: an intimate four-character piece about the aftermath of a school shooting that unfolds mostly in one room, letting a powerhouse cast and a thoughtful script carry much of the burden of meaning.

Martha Plimpton and Jason Isaacs play the parents of a teenage boy who was one of ten students murdered in a school shooting. Ann Dowd and Reed Birney are the parents of the killer, a depressed and disturbed young man. The couples agree to sit at a table in the basement of an Episcopalian church and talk about, well, everything, in hopes of moving past depression, grief and anger, through catharsis, and toward a state of acceptance, or at least insight.

There's a brief setup featuring Michelle N. Carter as the social worker handling the details of the meeting, and Breeda Wool as a woman who works at the church, and is helpful to the point of being unnerving, but the vast majority of the film consists of the four main characters doing the hard work of confronting the unspeakable. The results are never less than riveting, and there are multiple moments—democratically distributed among the four leads—that are as good as screen acting can get.

Although "Mass" is an original work written for the screen by its director, actor Fran Kranz—in his feature filmmaking debut—it has the feel of a stage play or live TV drama that was subsequently adapted for the big screen, during an era when people would happily pay to see theatrical films about adults in the real world, dealing with life-changing events that could actually happen. Film buffs may be reminded of such claustrophobic stage-to-screen classics as "Days of Wine and Roses," "Marty," "12 Angry Men," "Vanya on 42 St." and "Glengarry Glen Ross." The film's excellence in every department earns these comparisons.

From the moment that Plimpton and Isaacs's characters, Jay and Gail, arrive at the church, tension starts coiling up, and you just know that when it's finally released, it'll be something to see. Plimpton, a 1980s youth star whose character actor phase has been consistently fascinating, captures the buried rage of a mom whose agony over losing a son in an act of obscene violence was magnified by the frustration of seeing the parents of the perpetrator protect themselves from legal and financial blame on the advice of legal counsel. From the second that she appears onscreen, you expect her to explode at some point; her exasperated and openly hostile expressions as the other couple obfuscates, minimizes, qualifies and otherwise tries to tamp down the tension in the room are all little masterpieces of reactive acting. Isaacs, however, catches up with Plimpton, as we start to discern that, even though Jay carries himself as a "voice of reason"-type who has done the right reading and consulted the right experts and thinks of himself as a mediator between his wife and the rest of the world, he's sitting on a megaton of anger himself.

Dowd's Linda and Birney's Richard initially come across as representatives of a specific type of middle American suburbanite, with a placid, peaceful-yet-resolute demeanor that reads as conciliatory and sensitive but that pretty soon starts to seem condescending and self-protecting. You see their vibe rather often among reactionaries who've figured out how to come across as presentable when dealing with people outside of the tribe.

Richard, the only character dressed formally, warns Jay and Gail at the top of their meeting that he has somewhere to be, and spends much of the first third of the sit-down seeming as if his main goal is to deflect blame from himself and his wife. He keeps reminding the others that this is a complicated situation and that the tragedy has many possible causes, that it's not possible to reduce it to any one problem, and soon enough you're rolling your eyes along with Gail, because it seems as if Richard has come to this meeting with a bad faith attitude, and cares mainly about not saying or doing anything actionable (even though both couples signed papers stating that they wouldn't use anything said in that room for legal purposes).

Richard's actually not wrong—a school shooting is a multifaceted horror that can't be reduced to any one thing. Parents will likely be made increasingly uncomfortable by the film's insistence that some things in life are mysterious and immune to simple explanation, and that even good mothers and fathers (all four characters here fit the description) can let certain things slide without realizing how they can snowball and eventually lead to indescribable misery and violence.

But does that necessarily mean that school shootings are, in some sense, an inexplicable cosmic occurrence, an "Act of God" like a flood or avalanche? Even floods and avalanches have human causes, as we're increasingly starting to understand and admit.

It turns out that the movie has decided to sidestep or minimize some of the more explosive political and cultural issues that tend to be at the center of incidents like these in the United States, gun ownership and gun control being a huge one. Linda and Richard apparently don't own firearms themselves, and it's explained that their son, a prototypical bullied loner who was nonspecifically radicalized online, stole them from the father of a friend. Nor is there any talk of the respective politics of the couples.

This seems like a case where the filmmaker has decided to trade one kind of storytelling problem for another. You can't discuss mass shootings in the United States—quite literally the only supposedly civilized country where these things happen several times a week for years on end—without discussing the gun lobby, the mass opposition to any kind of meaningful gun regulations, and lots of related issues. Richard's early invocation of his son's mental health seems as if it's going to lead to talk of how gun culture uses mental health as a red herring to deflect attention away from the necessity of gun control (as Jay observes, a tragedy can have more than one cause; it's interesting that Richard himself said this before Jay did).

But "Mass" seems unwilling to get too deep in the weeds when it comes to topics like these, as it would distract from the human drama, and the film isn't wrong to believe this; had the movie become a policy discussion using characters as mouthpieces, a la the worst of Aaron Sorkin, it wouldn't be nearly as moving as it is.

It's hard to convey in words the kind of visual excitement that comes from watching a piece anchored by four skilled, magnetic character actors who look like the sorts of people you might actually meet in life. Even the performer who comes closest to having a matinee-idol look, Isaacs, isn't a ridiculous, 'roided-up action figure, of the type that tends to anchor 21st century commercial films; with his sad eyes, grief-sunken face, and week's worth of facial scruff, he has the look of a middle-aged suburban man who runs a couple of miles a day, and who everyone agrees is the most handsome of all the dads.

These actors feel real in a way that movie characters rarely do, and Kranz shows that he has an instinctive feel for staging dialogue cinematically, making mostly subtle yet decisive and meaningful directorial choices (such as switching from locked-down, steady images to rough handheld shots, and changing the shape of the screen itself) while always letting the cast's in-the-moment decisions pull the story along.

This is a difficult movie to sit through, not just because of the subject matter, but because it's so honest in dramatizing how people process tragedy and carry it through life. 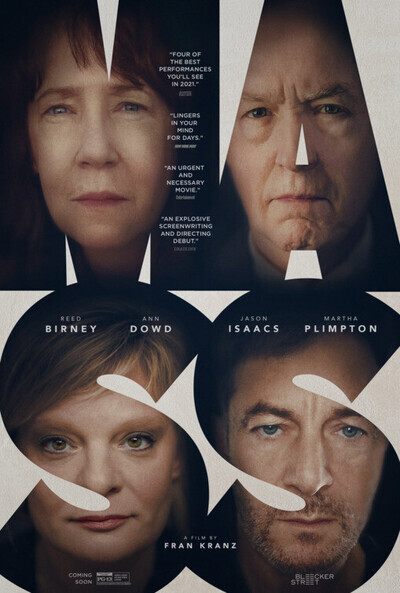