There’s a lovely little old-school manual typewriter in “Martin Eden,” director Pietro Marcello’s adaptation of Jack London’s semi-autobiographical novel. The protagonist of the title sits behind the mechanical device while transferring his innermost thoughts to the page. As Martin (Luca Marinelli of “The Old Guard”) hammered away at the keys, I was reminded how much I love the sound a typewriter makes. And because I am old, I was transported back to my schoolboy days when I banged out poetry and book reports on my old Smith-Corona. Ah, what glorious noises those things made, so much so that Dolly Parton wired their “tap-tap-tap-tap-DING!” percussion into the backbone of “9 to 5.” Typewriters were the soundtrack of a committed writer making a difference, a glorified and romanticized notion I subscribed to back when I young, foolish and full of optimism.

That sounded like a digression, but it’s not. Martin Eden wants to rise above his status by becoming a great writer with Something to Say™. The film sees this as noble, righteous even, and it expects us to understand his frustrations while putting up with him being a callous and not particularly wise jerk. He can’t see the predictable paths his actions will take, which is aggravating and plays in a way I am not sure the filmmakers intended. Though it draws attention to the socialist ideals of its source material, the transplant to another country splits the proletariat and the elite into two very canned clichés. The former just fights all the time or is repeatedly lectured; the latter is a bunch of snobbish boors who are terrified their precious daughter might run off with someone broke and uncouth. At least until that guy finds some success.

A sailor by trade, Martin has that familiar aspiration of joining a more elite group he despises because he’s in love. So he embarks on a quest to educate himself past the grade school levels he achieved before he was sent to sea at age 11. Part of the catalyst for his self-improvement is the French poet, Baudelaire. You may remember Baudelaire from my review of the dreadful thriller, “Backgammon.” In that film, the antagonist used quotes from the writer to upset his giggly girlfriend and her party guests. I haven’t read a single line of the guy’s work, but based on my reviewing history here, he’s the patron saint of cinematic characters who are pretentious and dull.

But I digress. Marcello and his co-screenwriter Maurizio Braucci transfer London’s novel from Oakland to Italy, which gives ample opportunity for viewers to ogle the scenery. There is also what appears to be old footage from real and fictional sources, including some gorgeous old shots of a massive ship at sea. Since we know Martin’s original profession, the moment where this majestic, multi-sail ship sinks should have been accompanied by one of Fellini’s clowns popping up onscreen while holding an arrow that said “SYMBOLISM.” As our hero rises above his station so that he may be worthy of the family of his bougie love interest, Elena Orsini (Jessica Cressy), his soul basically sinks into the abyss.

Elena’s meeting with Martin is far from a Meet Cute. He saves her brother, Arturo (Giustiniano Alpi) from a beating on the docks and, as thanks, is invited to dinner. It’s there where he discovers Baudelaire has a fan in Elena and sparks fly. The other members of the Orsini clan, while thankful for him saving Arturo, can’t wait for him to leave. Alas, Elena finds him endearing, so they sort of have to put up with him for the time being. Thankfully for the Orsinis, Martin decides to better himself while on his next voyage. He devours everything he can read, and is bitten by the writing bug that he hopes will bring him success while also highlighting the plight of his class.

Behind that aforementioned typewriter, Martin churns out piece after piece, all of it extremely angry and so raw in its fury that it keeps getting rejected by every outlet he solicits. In most movies, there’s that shot of the stack of “past due” bills that someone adds yet another envelope to; here it’s a stack of Martin’s own envelopes being marked “Return to Sender” by uninterested publishers. It’s telling that the most romantic moment in “Martin Eden,” the one genuine moment of emotion that works, is when Martin’s first success letter comes in the mail. Maybe it’s the writer in me, but the moment made me swoon with understanding.

The rest of me was far from impressed with “Martin Eden.” It’s a slog at over two hours, much of it spent with Marinelli screaming or acting coarse. Once he has enough success to help fund his causes, he still remains preternaturally disillusioned to the point where we can’t take him seriously. It’s like being privy to someone hate-watching life. Marinelli, who is in almost every scene, makes an admirable attempt at keeping us involved, but we already know what’s going to happen 20 minutes before the film shows us. So, we’re left impatiently drumming our fingers while Martin attempts to strangle his dying provocateur of a mentor, Russ Brissenden (Carlo Cecchi) before bearing witness to yet another one of Martin’s endless verbal rages against the machine. It all ends where you’d expect, especially if you were paying attention to that sinking ship.

If seeing people scream and holler while standing in front of beautiful Italian scenery is your thing, might I suggest Joseph Losey’s “Boom!”? At least that’s lively, has Noel Coward, Richard Burton, and Liz Taylor and doesn’t attempt to impart anything important. The agony “Martin Eden” feels toward his works not really making a difference will only resonate if you have the same feelings he does about your own creativity. It’s funny how the saying goes that artists “suffer for their art.” Because sometimes they also pass that suffering on to us consumers. 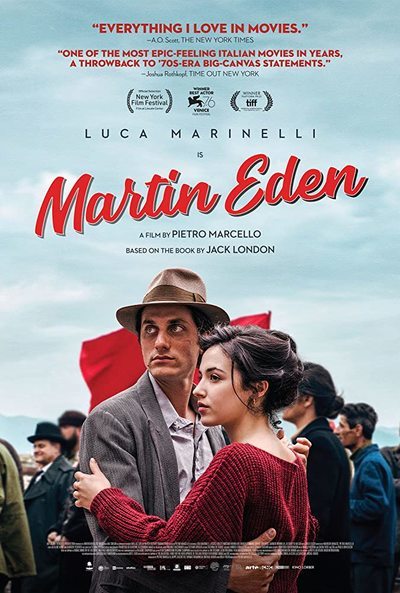