The press release for “Backgammon” promised me “sexual tension, danger and mind games among a group of college students.” It also bills the film as “part psychological sexual thriller and part classic mystery.” These are intriguing statements designed to attract viewers, as all good marketing should. Having seen “Backgammon," I can report that, like most marketing claims, these statements are absolute bullshit. None of the actors are convincing as a college student, and not just because they’re visibly too old for the role. The “thriller” and “mystery” parts involve an obnoxious, yet harmless intellectual blowhard. The mind games involve poetry and children’s board games. And if you came looking for the psychological sexing, or even just regular, good old fashioned erotic screwing, you’ll find it only if you’ve brought it to the theater yourself.

Something is off from the first scene, which involves bacon sandwiches and allusions to one character’s girlfriend seeing something that looked sexual but was not. Miranda (Brittany Allen) tries to cheer up Lucian (Noah Silver) after his girlfriend Elizabeth (Olivia Crocicchia) has stormed away from the cabin they’ve been holed up in all weekend. The aforementioned sexual tension is supposed to be between childhood friends Miranda and Lucien, but the actors have zero chemistry and the banal dialogue does them no favors. “Have a bacon sandwich, hee-hee-hee!” says Miranda. “I’m not hungry,” says Lucian. “It’s good for you, hee-hee-hee!” replies Miranda, holding an admittedly delicious-looking sammy in her hands. “If Elizabeth truly loves you, she’ll come back and see it was all a mistake! Hee-hee-hee!”

Not since John Travolta’s Terl in “Battlefield Earth” have I been presented with a character who punctuates damn near every sentence with a goofy laugh. Allen, who gives one of the worst performances I have ever seen in a film, applies this tic to the increasingly dreadful dialogue (credited to three writers) she is forced to utter. It’s so annoying that you want to mute the soundtrack. Since Miranda is supposed to be the kind of seductress Sybil Danning, Shannon Tweed or Sylvia Kristel would have played had “Backgammon” been made 30 years ago, Allen is forced to exude what director Francisco Orvañanos erroneously thinks is sexiness. Allen slinks around the entire film with her mouth slightly agape like the Gerber baby, scrunching up her face and giggling at every opportunity. Had her character been revealed to be an alien from a distant planet who got all her ideas about the human female from 12-year old boys, it would have been a more convincing plot twist than anything “Backgammon” offers the viewer.

Silver fares no better. He too walks around with his mouth open, a blank stare on his face that’s supposed to represent, I don’t know, confusion? Horniness? Fear? He looks the same in every situation. His character is written as the dumbest man on Earth, a guy who stays around hoping to get lucky even after his lust object starts cutting herself and demanding “let’s play Backgammon, hee-hee-hee!” Every time Lucian tries to escape, the script finds a way to keep him around for no credible reason. Sure, he’d like to sleep with Miranda, but Jesus, she is not the only fish in the sea. Doesn’t this guy have Tinder?

But I digress. Games—not mind games—actual games play a major part in "Backgammon," because who doesn’t want a little Monopoly to go with their sex? The “thriller” part of the film climaxes with a backgammon game. And the “mystery” subplot is kicked into motion by a poker game initiated by Miranda’s soon-to-be-ex, Gerald (Alex Beh). Gerald is so obnoxious that he forces me to use the dreaded word “pretentious” to describe him. Gerald’s modus operandi is to get a rise out of whomever he’s around, a feat accomplished either by quoting the French poet Baudelaire or spouting off insults that are so piss-poor they wouldn’t win third prize in a Don Rickles imitation contest held by fifth graders. Gerald also paints lousy portraits of Miranda naked, which Lucian stares at with, you guessed it, his mouth hanging open. As luck would have it, Lucian wins all these paintings in Gerald’s poker game.

Gerald drinks constantly, and is abusive to Miranda. So it makes perfect sense when she kicks him out. What doesn’t make sense is the notion that Gerald sticks around, stalking the house and doing things like altering the paintings in an attempt to scare Lucian. Gerald may be bigger than Lucian, but “Backgammon” never presents him as a credible threat, so there’s no terror factor. Besides, what’s Gerald going to do? Poetry his victims to death?

“Gerald is not coming back,” Miranda reassures Lucian, “because I think he might be dead. Hee-hee-hee!” Lucian doesn’t even have a response to this particular bit of foreshadowing, and that was the moment when I wanted to walk out of "Backgammon." This wasn’t possible, as I was watching the film at home. Like Richard Gere in “An Officer and a Gentleman,” I had no place else to go. 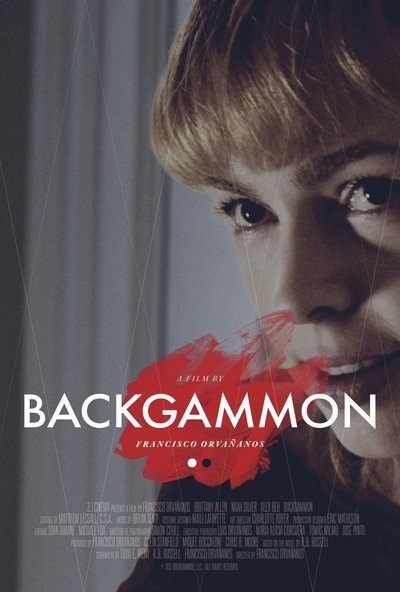