Although there are approximately six billion things that I would rather do that sit through the dreadful thriller "Return to Sender" again in my lifetime, I must admit that there is one circumstance under which I might contemplate a second viewing and that would be if the Blu-Ray (which may have already been released by the time that you reach the end of this sentence) includes a commentary track featuring screenwriters Patricia Beauchamp and Joe Gossett and/or director Fouad Mikati. Perhaps by listening to them, I could finally begin to understand what it was that they were going for since it certainly isn't evident in the final product, which seems to exist only to answer the unasked question "What would "I Spit on Your Grave" have been like if the main character had been Martha Stewart?"

On the surface, Miranda Wells (Rosamund Pike in a role that, it probably goes without saying, she shot before finally getting her mainstream breakthrough with her Oscar-nominated turn in "Gone Girl") seems to have it all—she is about to begin training as a surgical nurse at the hospital where she works, she is preparing to buy a new house with the double oven that she covets and spend her spare time baking cakes that would make the Cake Boss himself weep into his fondant—except, naturally, for a fella. (Of course, one might point out that this might be due to the fact that she is fairly cold and curt to everyone she encounters, even family and friends, but never mind.) To that end, she agrees to go out on a blind date with the acquaintance of a friend. When the day arrives, the guy (Shiloh Fernandez) turns up much earlier than expected and even though he looks more like a busboy than anything else, Miranda, a major control freak in virtually every other area of her life, invites him in without hesitation while she gets dressed. This turns out to be a bad move because the guy, William, is not her expected date but a brute who proceeds to violently rape her in her kitchen.

William is caught and prosecuted almost immediately but even though her attacker is off the streets, Miranda is unable to move on herself and even develops a nervous twitch that sidelines both her medical future and cake frosting abilities. (Cue the moment when she breaks out into a rage after failing to master an "Operation" game.) As a way of getting control of her life at last, she begins writing to William in prison in the hopes of being allowed to visit with him. Although he returns her letters at first (which explains the otherwise nonsensical title), he finally relents and thus begins a long chunk of the narrative devoted to the two of them getting to know each other and Miranda even flirting with him a bit. Thanks to his good behavior, William is paroled (in what seems to be a ridiculously short amount of time) and Miranda even allows him to help rehab her house in scenes that seem like outtakes from some Nicholas Sparks nonsense. Does Miranda think that getting to know and understand the man who attacked her will provide the catharsis she needs or does she have something more sinister in mind? I wouldn't dream of suggesting which path she takes but if you are curious, the posters and trailers are perfectly willing to supply that information.

If this all sounds utterly ridiculous and borderline offensive in the retelling, that is nothing compared to seeing it actually play out before your eyes. There is not a single plausible moment or recognizable bit of human behavior in any one of its 93 minutes and virtually every line of dialogue is of the tin-eared variety. ("There are other options than having your rapist over for dinner!") The filmmakers display absolutely no insight or interest into the plight of survivors of rape outside of the apparent glee that went into the choreography of the attack itself (the rest of the film, by comparison, has the flat, forgettable look of the Lifetime movie that this probably should have been in the first place). As for her diabolical plan for vengeance, it fails because a.) the plan is so idiotically conceived that there is not a single step that doesn't contain at least one glaring gap in logic and b.) it is executed so poorly that even the most revenge-hungry viewers will be left wanting by the lack of any real catharsis.

Of course, "Gone Girl" had its head-scratching moments as well, but one was able to overlook them thanks to David Fincher's flawless direction and the incredible performance by Pike. Here, Mikati's direction is so thumb-heavy that he almost seems to be accentuating the implausibilities of the story.  Pike, who is probably embarrassed beyond belief that this is seeing the light of day, tries her best, but not even her undeniable gifts are enough to make sense out of the screenplay or make her character into anything other than a wildly unpleasant dope. As her attacker, Fernandez fails to convince either as a menace or as someone who may genuinely be trying to make amends for his unforgivable past. As Miranda's father, Nick Nolte wanders in and out of scenes every once in a while, and when he leaves, most viewers will want to join him.

"Return to Sender" is dreck of the lowest kind—a sleazy exploitation film that is all the worse because it has somehow convinced itself that it is thoughtful and profound. For anyone interested in a well-told story, its failings at the most basic narrative levels will seem appalling. For anyone who has been a victim of sexual violence, its weirdly dated approach to rape and its aftermath will come across as enraging. For fans of Rosamund Pike, seeing her talents wasted on junk like this will be an enormous bummer alleviated only by the fact that she will hopefully be able to avoid this kind of trash in her post-"Gone Girl" career. As for me, I think I am going to take back what I said before about possibly watching "Return to Sender" to hear the commentary track. 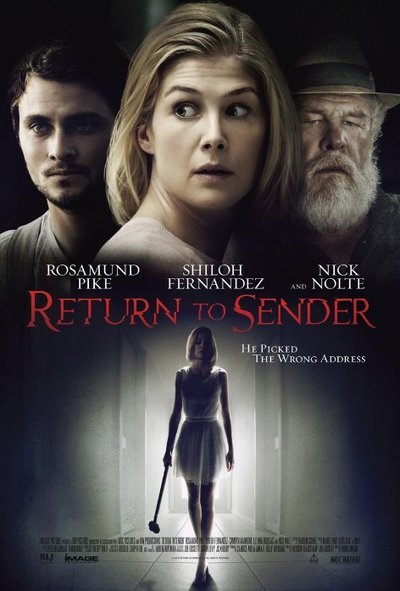