20 years ago, photographer Larry Clark directed “Kids,” an eye-rolling provocation that caused an uproar verging on parody. Critics either clutched their pearls in outrage or hailed the coming of a director unafraid to engage his obsessions, no matter how skeevy and perverted they appeared. In “Kids,” as in all of his subsequent films, Clark’s camera favored rail thin, underage teenagers engaging in all manner of sexual acts, with and without the permission of their partners. He was an equal opportunity lingerer, though he seemed to favor the naked male posterior in motion. In most of Clark’s work, there is this unquenchable need to be “shocking,” even at the expense of destroying potentially good material. For some, this may be titillating; for those of us who have been around the block a few times, it’s tedious at best, almost unwatchable at worst. Teenagers have sex and are mean. The thought and sight of this make some people randy. What else is new?

Outside of 2001’s “Bully,” a film that powerfully used Clark’s obsessions in the service of harrowing truths, his films have a redundancy that no amount of exquisite visual framing can cure. You know exactly what you’re getting when his credit appears onscreen. But with “Marfa Girl,” even Clark seems to be tired of his usual tricks. This is a listless, uninspired piece of work whose most outrageous sexual material—toned down by Clark’s standards—is no match in the offensiveness department for the scene where Marfa Girl (Drake Burnette) verbally dresses down a Mexican border patrol officer from her perch of privilege.

The movie isn’t even about Marfa Girl, an arty twentysomething who shows up whenever convenient to discuss and display her objectification of the film’s oversexed brown people. Most of the time we’re following Adam (Adam Mediano), a half-Mexican teenager as he skateboards, smokes and screws his way through the boredom that infuses his hometown of Marfa, Texas. It’s Adam’s 16th birthday, and one of the gifts bestowed on him is a birthday licks paddling by his hugely pregnant high school teacher. Adam is so skinny that the teacher manages to fit him over her lap despite being 9 months pregnant. I half-expected the teacher to reveal that Adam’s her baby daddy, but “Marfa Girl” has other plans for its protagonist.

Adam’s mother rehabilitates parrots and engages in weird, new-Agey dialogue with other residents of Marfa. With the introduction of this character, “Marfa Girl” gives the sense that it plans to explore the scenario through the eyes of an older generation, but Clark is immediately distracted. A potentially interesting, thoroughly weird scene between Adam’s mother and two friends about hippie spirituality, Mexican witch doctors and a frozen dead parrot (I’m not kidding) is suddenly interrupted by Marfa Girl, who basically says to the sole male participant “hey, how’d ya like to come to my house and get butt nekkid?” The movie follows them. Sue me, but I wanted to hear more about the parrot popsicle; at least I’ve never seen that in a movie before.

Marfa Girl also has plans for Adam. In the film’s only good sequence, she engages him in a superficial though entertaining discussion on sex and the double standard. Never mind that the scene begins with Adam In a tub and Marfa Girl on the toilet. The entire dialogue has a breezy, free-wheeling cadence to it, with Clark’s camera following the duo on a walk through town. For all her liberation, Marfa Girl respects the age of consent, telling Adam that, on his 17th birthday, she will bang him until his eyes pop out of the sockets. It’s the one time the meandering nature of “Marfa Girl” succeeds, proving that, with a better script, this could have worked as a series of unrelated conversations punctuated by rolls in the hay.

Unfortunately, since Marfa, Texas is a border town, Clark has to introduce some border patrol agents into the mix. One is the aforementioned guy whom Marfa Girl lectures for “arresting his own people.” Another is a fellow Mexican border patrol guy who chastises his colleague for being rightfully offended by Marfa Girl’s nonsense. (What happens to him is plain stupid.) A third, and the main villain of “Marfa Girl”, is a White patrol agent named Tom, played by Jeremy St. James. Tom is in another movie altogether, an afterthought so poorly written and stitched into this movie that it’s downright embarrassing. I can’t blame St. James, as not even Pacino or De Niro could have made this character work as written.

Tom’s only job is to harass Adam, a legal U.S. resident, and say unbelievably inappropriate things to women, including Adam’s Mom. People put up with him for reasons unexplained, as he is clearly psychopathic. He is so stereotypically villainous that, in the film’s absurdly violent climax, he should have imitated a silent movie bad guy and tied someone to the railroad tracks that run through the town. Slasher film psychos have nothing on Tom: In the span of five minutes, he rapes a woman, attempts to kill another one, and handcuffs an underage boy to a pole so he can orally rape him. “Give me some of your hate paste!” he yells as he molests his victim. Through all this, I was reminded of Roger Ebert’s review of "Blue Velvet", where he expressed concern for the actress Isabella Rossellini’s degradation by her director.

Speaking of Roger, he has a line that best describes how I’ve usually felt about Larry Clark’s movies: In his review of “Crimes of Passion,” Roger stated “there is nothing quite so ridiculous as someone else's sexual fantasies, and nothing as fascinating as our own.” Clark clearly has a visual eye, and some of the compositions in his films are breathtaking, but unless his predilections float your boat, his movies are endurance tests. This one is being released solely on Clark’s website, a daring move I admire a lot more than the movie itself, which is easily his worst.

Rent “Bully” instead, or “Kids” to see this material when it was fresh. 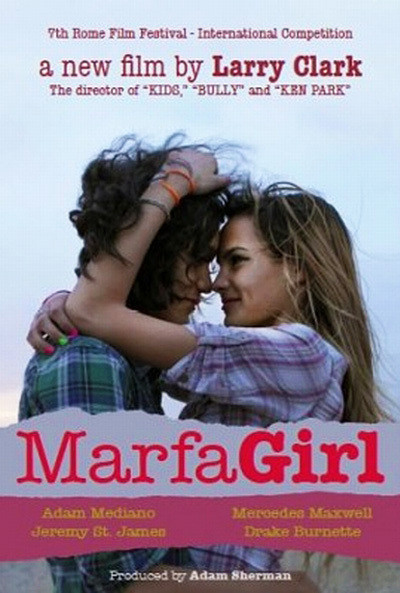