"Man is least himself when he talks in his own person. Give him a mask, and he will tell you the truth."

The description of "Manifesto"—Cate Blanchett playing 13 wildly different characters, each of whom delivers a famous "manifesto"—sounds like an arch exercise in style, or, worse, a self-indulgent snoozefest, an opportunity for the sometimes showoff-y Blanchett to show off even more. But that's not what it is at all. And the results are not arch, or self-indulgent, or dryly academic. German artist and filmmaker Julian Rosefeldt has collaborated with Blanchett to create something entirely unique and not easily described or classified. The film is thought-provoking, visually arresting, and occasionally very self-important (appropriate, since a manifesto is a declaration of self-importance). The most surprising thing is how funny "Manifesto" is, on occasion. Your mileage may vary (humor is subjective, and all that). But Blanchett delivering these intimidating texts, and completely changing the internal context from which each text emerges, is so breathlessly inventive that it's nothing less than totally entertaining, even in sections that don't completely work (there are a couple). The "Thanks" section of the end credits includes: "To all the marvelous authors of these mind-blowing manifestos." These are not sacred texts that should stay in textbooks. They are to be played with, turned inside out, made fun of, re-invented. The whole film's energy is a celebration of the diverse ideas and concepts that make up our culture.

The manifestos included are manifold, starting with Karl Marx and Friedrich Engels' "Communist Manifesto," shouted into a megaphone by Blanchett, totally unrecognizable as a wandering filthy homeless man, with wild hair and an unhinged look in her eyes. She stands on the roof of an abandoned warehouse or factory, screaming out to the surrounding forest about the downfall of capitalism. Most of the manifestos though were written by artists: Andre Breton's Surrealism Manifesto ("Surrealism is the 'invisible ray' which will one day enable us to win out over our opponents"), the mantra-like "I Am For an Art" manifesto by sculptor Claes Oldenburg, Jim Jarmusch's "Golden Rules of Filmmaking," Werner Herzog's Minnesota Declaration ("By dint of declaration the so-called Cinema Verité is devoid of verité. It reaches a merely superficial truth, the truth of accountants."), and, inevitably, the famous Dogme 95 manifesto, from Danish filmmakers Lars von Trier and Thomas Vinterberg ("Genre movies are not acceptable").

Manifestos are delivered by people who don't just care about their art. Their ideas about their art are life or death. It's urgent that they declare themselves, strongly, as "against" something, in order to show what they are "for." Rosefeldt places these urgent texts in settings that don't "match" the content (a news anchor's desk, a family dining room, a grade-school, a stock exchange) and this serves to highlight the words, turning them absurd, turning them meaningful. Instead of a droning lecture, you lean forward in your seat to try to understand.

Each manifesto is delivered by a different persona in a different setting. The film was shot all over Germany (in just 12 days), backgrounding the words with atmosphere and landscapes that—at first glance—have nothing to do with the manifesto being recited. That's the most fascinating part, and it's only possible through the virtuosity of Blanchett's performance, and her sensitivity to context. So we get Blanchett as a fifth grade teacher, giving a lecture to her class, spouting the Dogme 95 text, the children repeating her words after her. There's Blanchett as an imperious Russian choreographer dressed like Norma Desmond, shouting with fury at her dance troupe, using only the words of a manifesto. But you could swear, from her behavior and rhythm of speaking, her gestures, that Blanchett was actually saying, "Let's pick up the pace, girls, take it from the top!" ("Manifesto" would be an excellent film to show to acting students. This is how you "make sense" of text. It's not just about what you say or how you are feeling. It's about who you are, and where you are, and these factors dictate how you say something.)

We get Blanchett as an intimidatingly gorgeous and coiffed news anchor, questioning a rainstorm-buffeted correspondent (also played by Blanchett) over a video feed. The back-and-forth dialogue between them comes in a perfect imitation of nightly-news-speech patterns and tones, but the text is Sol LeWitt's "Sentences on Conceptual Art." There are more transformations: she is a mousy mother leading a family prayer, a futuristic scientist, an adrenaline-addicted stock trader, a sleek smooth party host, each with a different voice, look, and feel. As the characters and contexts change, the whole project becomes a commentary on trompe-l'œil, masks, performance.

There are many different ways to be a good or great actress. Being able to transform is only one way (although the current trend is to value that above all else. Those who win Oscars are usually the ones who display "range"). But that's not the only way to be good or great. In "old Hollywood," the stars brought to their careers natural and distinctive personalities, crafted and encouraged by studio publicity, carefully chosen roles, and audience response. Joan Crawford was Joan Crawford. John Wayne was John Wayne. Within these personae, these gifted actors operated in a vast landscape; it's not correct to say that they "just played themselves." There are still actors who work in that "old-fashioned" personality-based way (and, not surprisingly, they are some of the biggest box-office stars today), but Blanchett is not one of them. Blanchett does not have a personality as unmistakable as a fingerprint. She is not Angelina Jolie or George Clooney. (This is not to put the two styles in opposition. One is not better than the other.) The blank-slate of Blanchett is what makes her such a chameleon, a vessel to be filled with the soul of someone else. It doesn't always work for her, and sometimes she comes off as skillful, but empty. When her gift works, though, she's dazzling.

Blanchett is a maestro of the Mask. Masks conceal, but they also reveal. Kabuki masters become so identified with their Masks that the two become one. When Blanchett plays a character that doesn't call for a mask of some kind, her work can flounder, or she pushes for effect (the recent "Truth" is a perfect example). But when she plays a character who uses a Mask in order to navigate her world ("Carol" being the most obvious example), she is set free in ways that other actresses are not. Nowhere is that more evident than "Manifesto." It is quite literally impossible to imagine any other actress (in her generation, anyway) taking on such a project, and making of it what she does. Oscar Wilde, another maestro of the Mask, observed in Dorian Gray, "It is only shallow people who do not judge by appearances. The true mystery of the world is the visible, not the invisible." Blanchett's work here, along with Rosefeldt's concept, and the entire collaborative team who worked on this film, is a meticulous exploration of the "mystery" of the "visible." 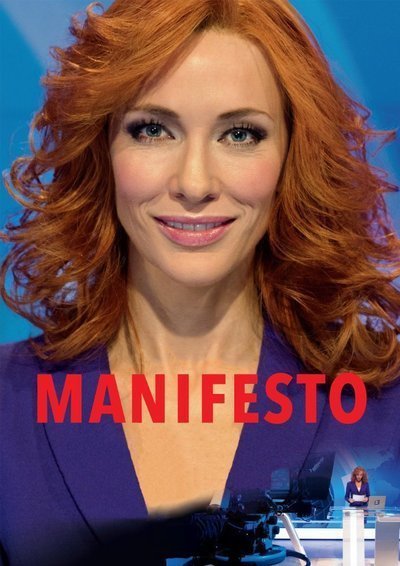 Jimmy Trash as Himself