Have we reached an era of journalism in which internet nitpicking and clickbait forces news readers to examine each individual tree instead of considering the entire forest? It certainly feels that way as soundbites rate higher on Twitter than speeches, and segments of news programs feel devoted to salacious details more than presenting the full picture. James Vanderbilt’s effective “Truth” makes the case that this state of journalistic being really got underway with the railroading of Mary Mapes and Dan Rather in 2004, over a “60 Minutes II” story that purported that then-president-and-candidate George W. Bush not only dodged service in Vietnam, but didn’t serve his duty on the Texas Air National Guard on which he was placed to get out of combat. It was a blockbuster story that literally blew up in the face of the entire news structure at CBS when it was revealed that some of the documents used as evidence were not thoroughly verified. “Truth” makes the compelling case that no one really asked if the story was true or not, merely using the furor over the documents as a way to tear down the rest of the piece. OK, maybe the documents weren’t fully verified, but is the story still true? “Truth” takes a stand that Mapes, Rather and the rest of their team made undeniable mistakes, but were also screwed over by a political and journalistic system that has lost its priorities.

“60 Minutes” producer Mary Mapes (Cate Blanchett) and the legendary Dan Rather (Robert Redford) were riding high when they got a tip linking Bush and the Bin Laden family. They had just won numerous accolades for their Abu Ghraib coverage. The tip went nowhere directly, but led to a deeper look at Bush’s military record, and accusations that Ben Barnes (Philip Quast) had gotten Bush into the Texas Air National Guard. After a deeper investigation that involves her crack team—played by Topher Grace, Dennis Quaid, and Elisabeth Moss—Mapes meets with a man (Stacy Keach) who gives her documents that clearly state that Bush barely showed up for his National Guard service, and his superiors were asked to forge his service. Trying to get the story first, “60 Minutes II” cuts some corners in terms of verification.

Almost instantly, questions are raised. It looks like a few of the smoking-gun memos may have been produced in a word processing program and not on a typewriter. Where did they come from? Were they forged? And, perhaps most interestingly, did Mapes’ politics play a role? Would she have run the piece so quickly if it was damning to Kerry? What first seems like a home run quickly turns disastrous as Mapes’ superiors (including an always-effective Bruce Greenwood) turn on their favorite producer, and bring in the lawyers. There are even accusations that CBS scapegoated the “60 Minutes” team at the behest of parent company Viacom, who wanted to appease an administration kind to corporate giants.

It’s not surprising that “Truth” takes the perspective that it does—you don’t cast Cate Blanchett and Robert Redford as Mapes and Rather and not expect the film to side with them. To their credit, these two legends ground the characters enough that they avoid the pedestal onto which Vanderbilt often tries to place them. Blanchett’s Mapes is nearly a variation on her award-winning turn in “Blue Jasmine,” a smart, striking woman who senses the world falling apart around her. Meanwhile, Redford gives the best performance in the film, finding Rather’s gravitas without doing an impersonation. It’s a nuanced portrayal where a lot of other actors would have gone broad or just filled the space really with what people know of Rather.

When one looks beyond Blanchett and Redford, “Truth” starts to falter. Unlike the superior “Spotlight,” much of the team behind Mapes here feels like mouthpieces for the screenwriter. Topher Grace gives an impassioned speech that probably didn’t work great on the page but is even more manipulative coming out of Grace’s mouth, and Elisabeth Moss is completely wasted in the role of the question-asking member of the team. There’s a scene in which she asks seven questions in a row that's so blatantly designed to explain the narrative that it’s nearly insulting. Quaid is decent, but feels wasted. Again, it’s probably not fair to compare, but “Spotlight” is a film in which every member of the team feels essential, and that’s disappointingly not the case here.

While there are a few too many over-written speeches (I half-expected someone to say “You can’t handle the truth!” and wink at the camera), Blanchett and Redford justify a look at “Truth.” They clearly feel passionately about the material, and that fervor comes through in their work. In the end, “Truth” is not unlike a veteran news program—solidly made, interesting, and worthy of sparking discussion, whether you agree with its political bent or not. It encourages people to start talking about the purpose of journalism, and seeing the greater picture. If it's not too late to do so. 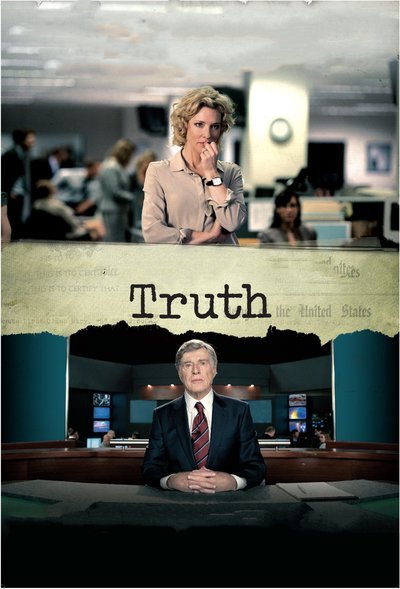 Rated R for language and a brief nude photo.

Robert Redford as Dan Rather

Author ("Truth and Duty: The Press, the President, and the Privilege of Power"