On the surface, "Maidentrip" is a documentary that recounts the incredible feat achieved by Laura Dekker, the Dutch schoolgirl who became the youngest person to sail solo around the world in January 2012 at age 16. But this is no fight-to-the-finish quest to break a sports record or perilous struggle for survival against the elements. Instead, it is a high-seas chanty of a coming-of-age tale: a portrait of a once-giddy youngster who develops into a poised and determined woman over the course of 17 months as she charts her course not just on the water, but in life.

The movie is directed by Jillian Schlesinger but primarily filmed with a Sony Handy Cam and narrated in both in English and Dutch (with subtitles) by Dekker herself during long passages aboard Guppy, her 38-foot refurbished ketch. In between endless days of sailing, there are stops at the Canary Islands, the Panama Canal, the Galapagos Islands and French Polynesia. Delicate watercolor-style maps provide a way to keep track of her progress while uplifting, often-propulsive string music by Ben Sollee sets the mood on the soundtrack.

One of the first orders of business, however, is to quickly address the 10-month controversy that developed in Holland in 2009 after Dekker announced her plans to circumnavigate the globe. Fearing for the teen's safety, the government stepped in, sharing custody with her parents to prevent her from attempting the challenge until a court finally ruled that she could proceed. The media labeled her spoiled and delusional.

As we learn in segments devoted to her upbringing—illustrated with home video and snapshots—if ever a child was raised to achieve this goal, it was Laura Dekker. She was born on a boat in Whangarei, New Zealand, during a seven-year trip around the world conducted by her Dutch father and German mother, and spent her first four years at sea. She had her own dinghy at 6 and always dreamed of repeating the route that her parents followed.

Divorce split up the family, with Dekker choosing to reside with her shipbuilding father while her mostly-absent mother lived elsewhere with her younger sister. She was forced to become self-sufficient when her overworked dad had a breakdown, learning various life skills and acquiring a self-assurance that would serve her well during her remarkable expedition.

Dekker captures on camera portions of some of the more harrowing episodes encountered during her oceanic trek, including the heavy damage her boat sustained after making it through the hazardous Torres Strait between Australia and New Guinea as well as enduring 60-foot waves and heavy rains while navigating around the Cape of Good Hope.

But whenever the going gets really rough, focusing on the task at hand rather than filming becomes a priority. Perhaps as a result, the narrative tends towards the meditative and Dekker's personal growth. At first, she recounts how she wanted to step ashore regularly for sightseeing. Loneliness is an issue. Dekker sounds weepy during footage of dolphins swimming alongside Guppy, as she begs them to linger a while longer.

She hangs out with an American sailing couple at one tropical port of call, catches up with her mother and sister at another and reunites with her dad in Australia, where he helps her repair the battered Guppy. But it's when Dekker is stuck adrift for 47 days waiting for the wind to pick up on the Indian Ocean that she realizes that solitude actually becomes her. "I love being alone," she says. "Freedom is when you're not attached to anything."

She also realizes that the everyday grind of the Netherlands—which she describes as "Get money, get a house, get a husband, get a baby and then die"—is not for her. Instead, Dekker buys a New Zealand flag to fly in French Polynesia, a place she refers to as "paradise."

What a relief it is to spend quality movie time with an adolescent girl who isn't pining for a boy or obsessed with social media. Not that Dekker doesn't act her age regularly. She adorns herself with headbands, wrist ornaments and necklaces. She dyes her blond hair red around the trip's midway point. She celebrates after making popcorn for the first time. She bounces around to music and eats out of a cooking pot just because she can. She even swears, though not quite like a sailor.

Dekker is emphatic when she tells a reporter who comes aboard the Guppy that she is not concerned about making it into history books. It is about the experience, she says. Some have compared "Maidentrip" to a young female version of Robert Redford's "All Is Lost". But in Dekker's case, all seems to be found. 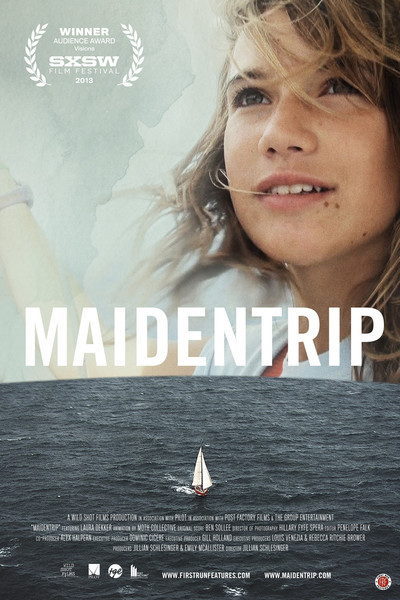 Laura Dekker as Herself