Magic in the Moonlight

Compulsive filmmaker Woody Allen has pretty much admitted that his cinematic practice is such that each of his pictures is a swing at something. And that he’s the last to know, in a sense, the extent to which he “connects.” Which is not to say he has no opinions about his pictures—he does, and they’re usually ones related to disappointment—but rather that he keeps up the pace that he does—making one film a year, like clockwork, since 1983—out of a genuinely aspirational impulse.

Critical opinion on the extent to which he connects varies pretty wildly. I remember seeing Allen’s 2005 drama "Match Point" at the Cannes Film Festival and thinking it a lot of silly rot. So did another critic friend, and imagine our surprise as we filed out into the lobby of the screening area to mix with dozens, if not hundreds, of critics who found the picture a thrilling return to form, or an Allen renaissance even. But the follow-up to that, 2006’s "Scoop," was hardly anyone’s idea of primo Woody, and reception was wobbly from that point on, although the past four years have been, most would agree, pretty good artistic ones (although not so good with respect to certain aspects of Allen’s personal life, one is obliged to note). 2011’s "Midnight In Paris" was considered by many a bonafide comedic masterwork and became a commercial hit; the more pro forma but not-without-its-innovations (and pleasures) 2012 "From Rome With Love" did more than coast on the good will generated by "Midnight;" and 2013’s "Blue Jasmine," derivative of Tennessee Williams or not, garnered a Best Actress Oscar for its lead, Cate Blanchett.

While Allen’s new picture, "Magic In The Moonlight," isn’t even close to being a disaster (for that, see, well, "Scoop"), I don’t think it’s unreasonable to note that, in my estimation, it’s where Allen’s latest streak…well, let’s not say “ends.” Let’s be moderate and say “ebbs.” Don’t get me wrong, much of "Magic In The Moonlight" is a pleasure to experience, particularly if you’re an aficionado of the sort of sophisticated, neurosis-laden romantic comedy that counts as one of Allen’s specialties. The movie is a period piece, set in Europe in the late 1920s, which is also a boon as it frees Allen from trying to have to come up with credible dialogue for contemporary characters in their 30s, something he’s more challenged to achieve as the years go on.

The premise, too, is charming: celebrated stage magician Colin Firth, a dyed-in-the-wool materialist, is enlisted by an old friend to sojourn to the South of France and debunk a young woman claiming to be a spiritualist, who at the moment seems to have hoodwinked a rich American family, particularly its moony first-born son and heir. Once in the intoxicating atmosphere of not just the playgrounds of the idle rich but that attending Sophie, the utterly disarming communicator-with-the-afterworld, a young redhead played by Emma Stone, Firth’s Stanley softens. Upon discovering that he cannot, in fact, find any mechanical trickery or other sham stuff in her routine, the character, who initially proclaimed to all within earshot of spirituality, “There is no real thing; it’s all phony, from the séance table to the Vatican,” does a complete turnaround and declares himself a believer. A new sense of well-being infuses the heretofore sour and cynical Stanley, and he is resoundingly grateful for it. Does this gratitude also translate into romantic feelings for her?

Well, one knows the answer to that—sort of. Some admirers of this picture seem under the impression that writer/director Allen is showing a new depth of feeling in this picture; that Stanley’s conversion to a belief in a supreme being is a sign that the auteur himself is feeling reflective, mellow. I did not get that feeling at all—there are plenty of Woody Allen movies in which rational characters succumb to Allen’s idea of irrationality. As the creator has not copped to some kind of spiritual epiphany himself, I did not expect the one in this movie to last—it was just a matter of when, and how, the other shoe would drop. This is actually where the movie’s problems start; after Stanley gets turned around, partially in an observatory-set scene that recalls the Museum of Natural History sequence in Allen’s semi-classic "Manhattan," "Magic in the Moonlight" grows a little diffuse and floppy, almost hesitant to blossom into a romance. While slightly frustrating, the reticence was also momentarily encouraging—as an old person myself, I’m loathe to bring it up, but let’s face it, Colin Firth’s age is a little advanced for him to be pursuing the likes of Emma Stone. What if the hemming and hawing in the second half of "Magic" were to be an indicator that Allen was going to do something really different?

Suffice it to say that the movie falls back on a couple of Allen standbys: the much-quoted “the heart wants what it wants” line from "Hannah And Her Sisters," and or that press conference where Allen explained the whole Soon-Yi business, and the “Yeah, but we need the eggs” joke with which Allen closes "Annie Hall." The only big news here is Colin Firth’s strong, unfussy performance, a straightforward delight that only gets better during his scenes with Eileen Atkins, who plays Stanley’s predictably wise aunt. Stone is breezy and free of contemporary affect; Hamish Linklater, as her moony suitor, is fine but appears to be in it for the company rather than the actual role (which also seemed to be the case with his appearance in the thankless "The Angriest Man In Brooklyn" opposite Robin Williams). And I don’t know why Allen enlisted the Australian actress Jacki Weaver, playing the mater of the rich American clan, to essay a Sally Struthers impersonation when Ms. Struthers herself is alive and as far as I know available. That’s showbiz these days I guess. 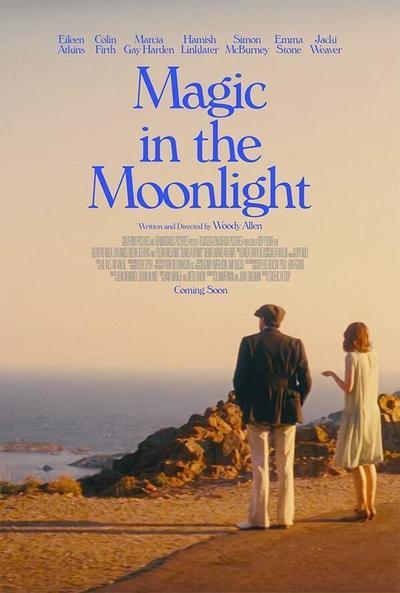 Rated PG-13 for a brief suggestive comment, and smoking throughout