Arnold Schwarzenegger is very good in this movie. This should not be a surprise. Like his action movie brethren Sly Stallone and Bruce Willis, Schwarzenegger has appeared to coast for decades on a cinematic personae, occasionally doing so in some less-than-satisfying features. However, one tends to forget that Schwarzenegger once worked for director Bob Rafelson and alongside Jeff Bridges and Kirk Douglas. One also forgets that, regardless of the ultimate quality of the features, he was very convincing as a Terminator, a barbarian and a very pregnant man. It is far harder to create something which does not exist, and even harder to command respect for doing so in the supposedly disreputable genres of comedy, fantasy and horror. While Schwarzenegger could never feasibly play The Godfather, he has certainly played that film’s idea: Conan’s enemy-crushing, lamentation-hearing goals are exactly the same as Michael Corleone’s.

“Maggie” is Schwarzenegger’s “Cop Land,” that is, a feature designed to highlight and showcase that which an action movie hero could only hint at in glancing moments between explosions. In “Cop Land,” Stallone stripped himself of all the violent artifice that comes with his build, presenting a vulnerability that is hauntingly effective. Schwarzenegger does the same thing here, playing a father who is clearly shaken when driven to violence. Looking unkempt in a scraggly beard, Schwarzenegger’s body language suggests a man who has survived several levels of Hell, yet fears the fresh ones that await him: His character, Wade, is a man who must watch the daughter he has loved and raised slowly wither away and die.

That his daughter is dying of some kind of zombie-inducing virus is not the problem that ultimately derails “Maggie”. Director Henry Hobson and screenwriter John Scott 3 are dealing in allegory here. What undoes this film is its unwillingness to be as emotionally brutal as this material requires. The actors are game for the ultimate heart of darkness of its scenario, that of a father possibly having to kill his own daughter, yet “Maggie” prefers to hide behind the heavy-handed symbolism of its visuals rather than deal with its tragedy head-on. The ending is an infuriating cop-out, negating the tense crisis build-up the film successfully created.

The actors make it easy to play the horror influenced hand “Maggie” deals us. As Wade’s daughter, Maggie, “Little Miss Sunshine”’s Abigail Breslin brings a welcome realism that shines through even as she starts exhibiting the gruesome signs of her affliction. Her horrified reactions as her body and mind betray her are devastating. As the stronger character in what is essentially a two-hander, she complements Schwarzenegger’s work by giving credence to his parental agony.

Hobson also assists by framing Schwarzenegger in scenes where his surroundings dwarf him. “Maggie” takes place out in the country, where Wade tends crops and raises the young family he’s started with Joely Richardson. Hobson shoots these sweeping nature sequences with a heavy emphasis on the symbolic, as if Terrence Malick’s biggest fan were somehow trapped in George Romero’s universe. A sweet looking fox pops up as a stand-in for the loss of innocence. And a shot of Wade holding a torch while standing in front of his burning crops practically begs for some Malickean poetry on the soundtrack. I could hear Schwarzenegger’s voice reciting it, and rather than evoking laughter, I honestly longed for this missed opportunity.

I feel some guilt in giving a film that tries this hard a negative review. But I couldn’t shake my sense of aggravation at how it all plays out, especially in Schwarzenegger’s case. His character arc is building to the kind of climactic showdown with the enemy you’d expect from one of Ah-nuld’s films, except here the expected violence is imbued with a crushing emotional weight. Had “Maggie” not been so successful in building its foreshadowing tension, it might be easier to dismiss how the ending robs us (and Schwarzenegger) of a final scene of potentially great power.

Look at the moment where Wade breaks down after having to murder an infected 4-year old girl. “I used to babysit her,” he says. Hobson clearly has faith in Schwarzenegger’s performance here, letting the moment play out across multiple scenes, including one where Wade’s role is solely reaction shots. As the girl’s mother in this particular scene, Rachel Whitman Groves gets an excellent monologue, her pain serving as a vocal counterpoint to Schwarzenegger’s visual one.

Another very good scene finds Richardson’s character, Caroline, ready to do the one thing her husband cannot do. “Maggie” underplays the moment, focusing on a pair of scissors and Caroline’s hesitant reactions to her stepdaughter’s every action. Later, when Caroline confronts Wade, she is empowered by the strength of this prior scene. The audience knows she’s right, and so does Maggie. The only person who hasn’t come around is Wade.

Scenes like these lead us to expect that boffo, tremendous scene where Wade confronts his biggest fear, and to his credit, Schwarzenegger is ready to play it. “Maggie” robs him of this chance, keeping him off-screen for an extended period of time, then tacking on that ending which, while tragic, is exceptionally dissatisfying. It’s almost as if all Schwarzenegger’s hard work were undermined by a sudden bout of cold feet by the filmmakers.

Despite all the snark that I predict will come regarding its lead actor’s choice to play drama, I refuse to blame the filmmakers for their casting choices. Like I said, Arnold Schwarzenegger is very good in this movie. It’s the movie that lets him down. 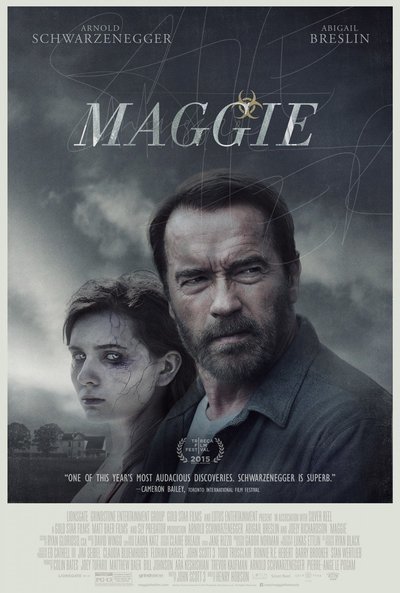