Knowing that the Spanish drama “Ma Ma” is about a woman coping with breast cancer, I was curious to check out beforehand how many well-known Hollywood films have tackled the subject in the past.

Considering that the disease is currently the nation's most common cancer according to the American Cancer Society, there are surprisingly few of note. Of course, the 1983 Oscar-winning “Terms of Endearment” is the grandma of such weepers. Then there was last year’s buddy pic “Miss You Already.” Both 2003’s “Pieces of April” and 2005’s “The Family Stone” are centered on holiday-themed family gatherings where the matriarch is at risk. And the 1967 camp classic “Valley of the Dolls,” of all things, had Sharon Tate’s sex symbol desperately opting for suicide after her diagnosis.

But breast cancer has been more frequently and, perhaps, better dealt with by TV movies (Lifetime’s short-film anthology “Five”) and medical-themed series (“Grey’s Anatomy” or “ER”) than it has on the big screen.

“Ma Ma” could be a case study on why that is, despite capitalizing on the considerable charms of Penelope Cruz, who is both star and producer. She is present with every pulse of her being as Magda, a young mother in Madrid who learns in the first scene that she must undergo chemo, followed by a mastectomy. She initially frets more about the pending loss of her right nipple (an ongoing theme) and having to reschedule her hair appointment than she does the status of her health.

Meanwhile, the other less-than-uplifting circumstances of her life—defined by an absent philandering philosophy professor husband, a soccer-mad son who craves a father figure and her status as an unemployed teacher—slosh around her like a tub brimming with soap-operatic suds.

Not that writer/director Julio Medem (playing it safer than he did with his 2001 sensation “Sex and Lucia”) avoids pulling out all the indie visual stops to heighten the experience of seeing Magda's inner transformation as the disease alters her viewpoint and the choices she makes. “Ma Ma” opens with what turns into a recurring image of an icy pane of glass that reveals a pale, sad-faced girl walking through a blizzard. With its spacious balcony, Magda’s well-appointed apartment is almost Nancy Meyers-level in its décor, while subdued piano music plays in the background. And when she feels the woozy effects of her ordeals, the camera goes back and forth like a wave-battered dinghy. We also get to occasionally peer at her heart as its beat shifts according to what she is undergoing, with frequent jump-cuts keeping us on guard.

But for all of these artistic touches as a director, Medem the screenwriter disappointingly provides zero female support in the form of relatives or friends for Magda, save for a kindly nurse. Instead, her handsome married gynecologist Julián (Asier Etxeandia) seems to have endless time to devote to Magda’s well-being, including serenading her now and then with cheesy love ballads. She also runs into a kindly soccer scout named Arturo (Luis Tosar) at her son’s match, just as Arturo receives the tragic news that his daughter has died in a car crash and his wife is in a coma. How convenient that they can rely on each other to fill their emotional gaps as Magda’s husband gallivants about all summer with a beautiful student.

Magda follows doctor’s orders after her operation and heads to the beach with her son, uncomfortable with his mother’s physical changes, and the introverted Arturo, who steadfastly keeps matters platonic even after his wife dies. With a 70% chance of being cancer-free, she is determined to carry on by bravely shaving her hair, wearing a wig, using a prosthetic breast and plotting to buy new “boobs.”

But when Magda receives bad news, the movie’s last third suddenly turns into a mawkish Hallmark card. Probable death is seen as a glorious opportunity for love, happiness and freedom; a miracle assures her that her valiant spirit will survive no matter the outcome.

Decorating these sentiments are claw-flapping red crabs near the water, perhaps a symbol of the disease that ironically has given her inner strength and wisdom. And, in a recovery-room reverie, we are treated to the sight of Magda’s beloved nipple preserved on ice. But more important than the washed-out blue-tinged rooms, bleached white interiors and sun-blasted sea and sand is Cruz, who single-handedly breathes a sense of genuineness into this maudlin exercise even if she can’t cure all of its flaws.

The conundrum continues: How do you do an inspiring breast-cancer story without depressing the audience or resorting to clichés? “Miss You Already,” while more original, already showed what happens if you go too far in the other direction. Still, if “Ma Ma” encourages just one woman to examine herself regularly and not wait to see a doctor if something seems amiss, at least the film will stand as a rather stylish public service announcement for early detection. 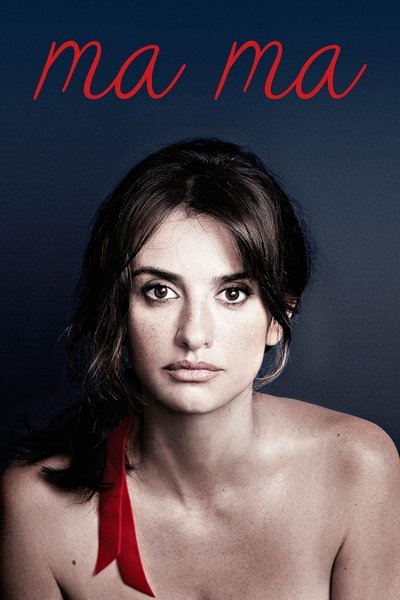 Rated R for some nudity and brief sexual references/