The thrills come extra cheap and late in Tate Taylor’s “Ma,” a horror movie torn between campiness and compassion, all while an Oscar-winning actress struggles to hold it together. It's the initial ambition of the story that’s likely to keep you in your seat, as Octavia Spencer adds a wicked smile to her maternal persona and treats the mammy archetype as a predator. But as great as that all sounds, the film proves to be more shallow than its edgy premise and subsequent themes promise.

The first red flag about “Ma” is that it’s dreadfully boring for the first hour of its 90-minute running time. Usually there’s something at the beginning of a horror movie to bookend its overall terror, but Taylor and Scotty Landes’ script plays it mighty vanilla by focusing on high school-age Maggie (Diana Silvers of “Booksmart”) and her mother Erica (Juliette Lewis) settling into the Ohio town her mother grew up in. It immediately feels like the wrong narrative focus, offering a bland idea of how a decent new kid could be corrupted by the schoolmates who wield their popularity like they're the one-percent, or how returning home can be embarrassingly painful, like when Erica runs into her classmate Ben (Luke Evans) and his friend Mercedes (Missi Pyle).

Octavia Spencer’s Sue Ann randomly pops into the lives of Maggie and her new friends, as a passerby outside a liquor store who agrees to buy them booze. She's a wolf in vet clinic scrubs and a Dorothy Hamill haircut, and wins their respect quickly, sharing her own fondness for drinking in the same rock quarry they're going to. But not long after, "Ma" enacts one of its unforgivable caveats: the youngsters don’t deduce that when a cop arrives later to break up their party, maybe it was Sue Ann who reported them. It's not the last time "Ma" has a laziness for its teen writing, and that lack of honesty rots at the screenplay: you don't buy that a cavalcade of teens would find it cool to hang out in a random woman's basement, or that pissed-off adults wouldn't just stop the movie's villain by means of "Local Woman Charged with Hosting Underage Alcohol Party" news headlines.

In one of Taylor’s cheapest methods to show that danger is coming, the narrative simply expands to show Ma’s point of view, which largely concerns her quiet life as a vet (in which she's often yelled at by her crotchety boss, played by Allison Janney). Ma stalks Facebook, and then stares into space. We’re supposed to feel uneasy about these inserts, especially as they flash back to when she was in high school, when she was unaware of the traumatizing bullying her classmates put her through. But these prove to be over-baked moments, one that would defeat a performer not of Spencer's fortitude. Taylor just can't find that nuance between creating pity while also making everything unsettling.

Soon enough, the teens treat Sue Ann like their servant, and a novelty: they rename her "Ma," and throw loud parties in her basement while she serves up shots. An emotional, tragic note is hit: these scenes give Sue Ann the opportunity to experience popularity she never had in high school, and she finds a relevancy and excitement in being needed. It’s mildly amusing, too, to see her teasing her new young friends, or getting down to "Funky Town." But then Ma starts to push boundaries, like when she pops up on campus and asks them to come over and party on a school day. She's too much for these kids, but she's also persistent.

Spencer paints her monster with splashes of recognizable emotions in these passages, of loneliness, neediness, and someone more disturbed than their giddy Snapchats indicate. But as Sue Ann gets to know the kids, she starts piecing together their connection to those who traumatized her in high school. A switch is then flipped, simple as that. Sue Ann simply chooses to start wreaking havoc, allowing the script to go from barely a slow burn, to weak jump scares, to its final form of diet torture porn. Even the secret that Sue Ann has in her house, meant to make her more complicated than plainly monstrous, feels too much like a device.

Meanwhile, the doomed teenagers of “Ma” form an amorphous blob, one that grows with each rager that Ma throws in her remodeled basement. The one standout is Silvers, who has a dull storyline of growing apart from her mother, and starts an innocent relationship with a boy named Andy (Corey Fogelmanis). But Silvers is better at leading us into the horror of the story, working as a frightened surrogate who at one point dares (along with McKaley Miller's Haley) to break Sue Ann's strict rule of never, ever going upstairs.

Taylor’s most distinct stylistic choice here, preceded by obvious music cues and stale party scenes, are Sue Ann’s torture methods. Given the unwritten rules for horror villains, one can be grateful that Taylor and Landes stay true to her physical capacity and accessibility—I’ll let you imagine what clever terror a middle-aged veterinarian can orchestrate, but some of it had my screening audience wriggling in unison. And yet delivered within such a gutless course of events, Sue Ann’s actions feel less like a cumulative grand finale, and more like a reward for simply staying tuned.

It’s hard not to fault “Ma” for being such a lost opportunity. You desperately want the movie to take its cultural context and go wild, like how “Brightburn” last week imagined a pseudo 12-year-old Clark Kent as a super serial killer. The set-up for “Ma” has that same inherently disorienting quality, but it abandons the many discernible themes that come to its surface: popularity as power, tokenism, the lingering horror of our high school years. “Ma” can’t even muster a delicious slice of nastiness—it’s not sharp enough for that. 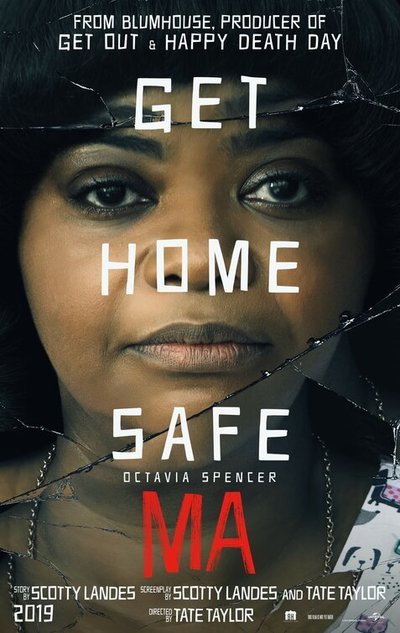 Rated R for violent/disturbing material, language throughout, sexual content, and for teen drug and alcohol use.