Children and their families have been delighted by the stories about Lyle, the music-loving, scarf-wearing crocodile who lives on Manhattan’s East 88th Street, since the first book in the series by Bernard Waber was published in 1962. An HBO Storybook animated film with songs by Charles Strouse ("Annie") perfectly matched the book’s colorful illustrations and cheerful story. Now a live-action movie with CGI animals features the songs of Benj Pasek and Justin Paul (“La La Land,” “Dear Evan Hansen,” “The Greatest Showman”), skillfully updating the story with a top-notch cast.

One wise choice was expanding the role of Hector P. Valenti, exuberantly played by Javier Bardem. We first see Hector as an aspiring performer and magician who cannot get a job. When he's told that his act needs something new, something more than tricks with pigeons and playing cards, he notices Eddie’s Exotic Animals shop across the street. In a back room there is a tiny baby crocodile. And he sings. (Another wise choice by this movie: Shawn Mendes provides the croc’s sweet, supple tenor.) Hector names his new friend Lyle and they have a wonderful time singing together. Hector puts everything he has into a grand performance with Lyle. But Lyle, who has never sung in front of an audience, gets stage fright. It is a disaster. Hector goes on the road to make some money and leaves Lyle in the attic, promising he will be back.

Eighteen months later, a new family who moves into the house on 88th Street: the Primms, math teacher dad (Scott McNairy), cookbook author mom (Constance Wu), and worried son Josh (Winslow Fegley), who is anxious about the crime rate in New York, his new school, and pretty much everything else. The basement apartment is occupied by the ominously named and very fussy Mr. Grumps (Brett Gelman) and his cat Loretta. “She is not a cat,” he explains. “She is a silver-shaded Persian with an extremely delicate constitution.” Grumps warns the Primms that he has lawyers on hand in case they violate any of the neighborhood rules, including “noise abatement” restrictions.

Josh is the first to discover Lyle. He quickly gets over his panic at finding a nine-foot reptile with scary teeth in his attic when he sees how friendly Lyle is and how sweetly he sings. It's a charming reverse of the idea of music soothing a savage; instead, we see one human after another relaxed and cheered by the singing of a species usually thought of as a terrifying alpha predator. Soon, Lyle and Josh are exploring the neighborhood at night, dumpster-diving for gourmet meals. Lyle’s encounters with Josh’s parents follow the same pattern. They are scared, then they are friends, then they learn confidence and courage.

Time for the return of Hector P. Valenti. Like Lyle, he initially appears to be an unwelcome intrusion but is quickly a cherished part of the family. The scenes of the Primms getting to know Lyle and Valenti are the movie’s highlight.

And then, things go very badly. Will this newly expanded family be able to stay together?

The CGI is exceptionally well-integrated, and with the help of good sound design, avoids the frequent mistake of making heavy creatures seem weightless. The Pasek/Paul songs are filled with joyful spirit, accompanied by some choice needle-drop classics like Stevie Wonder’s “Sir Duke” and a well-chosen Elton John number. McNairy and Wu are fine as the concerned parents who each find a liberating freedom after Lyle shows them something new about their favorite pastimes. Fegley keeps us on his side as the worried kid and then as the newly adventuresome devoted friend.

"Lyle, Lyle, Crocodile" is a bit too long for a family movie, with some unnecessary complications toward the end, and it's not quite up to the “Paddington” level of movie adaptations of classic children's books. But it is a warm-hearted family film with great musical numbers that will make another generation of kids hopefully search the attic on the chance that they might find a singing crocodile. 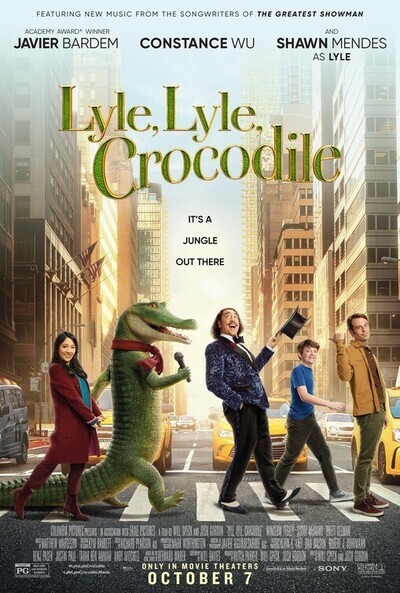 Writer (based on the book series by)