In 2021, movie musicals are again the rage. “In the Heights” and “Annette” have already been released. “tick, tick … BOOM” and Steven Spielberg’s remake of “West Side Story” are soon to follow. Back in 2015, a coming-of-age musical entitled “Dear Evan Hansen,” premiered on Broadway, and took the world by storm by winning six Tony Awards. Based on a book penned by Steven Levenson, it follows the eponymous character, a teen suffering from social anxiety, as he navigates a local tragedy for his own gain.

Evan (Ben Platt) wears a cast to protect the left arm he broke due to falling from a tree. He wants to talk to his crush, a guitar-playing Zoe Murphy (Kaitlyn Dever). But his anxiety gets in the way. To diffuse his uneasiness, his therapist suggests he write peppy letters to himself addressed as “Dear Evan Hansen.” When Zoe’s troubled brother Connor (Colton Ryan), however, takes one of Evan’s letters, only to die by suicide, Evan is tossed in the tumult of a fractured, grieving family. Connor’s parents believe Evan was his best friend. But the reality is far different. Evan plays along with the charade, gaining the fame, adulation, and love he’s always dreamed of. All at the expense of Connor’s memory.

The problem with “Dear Evan Hansen” is systemic, and the film operates on faulty ground. Connor’s grieving parents—Cynthia (Amy Adams) and Larry (Danny Pino)—meet with Evan under the belief he was Connor’s one close friend. Evan doesn’t put up much of a fight, which is blamed on his anxiety. But he deepens the subterfuge by enlisting his friend Jared (Nik Dodani) to create fake email exchanges supposedly written by Evan and Connor. The correspondence paints a picture of the pair visiting Connor’s favorite orchard, Evan falling from a tree, and Connor nursing him back to health. Cynthia and Larry completely buy the distasteful con. In his duping, Evan is revealed as a devious protagonist, and the film follows suit.

The Benj Pasek and Justin Paul penned songs, such as "Only Us," "Requiem," "Sincerely, Me" etc. are a ramshackled assemblage of garish arrangements and even worse lyrics that ring with the artificial tinge of a plastic lollipop. Likewise, there’s no amount of suspension that’ll lift anyone to the disbelief of Platt being a teenager. His very build and frame, especially his jutted winged shoulders, is that of a grown man. The one added benefit he brings is his malleable voice, a vehicle with the ability to discover pockets of hard-fought warmth where only cold suspicion exists.

Platt’s vocal performance might soar, but his choices are not merely overwrought; there are an assemblage of tics and jitters that’s often played for laughs rather than real pathos. Platt reprising his role, on the other hand, is the least of the film's problems: his character is threadbare, and there’s no amount of experience that can add depth to Evan. His task is made all the more challenging because Evan isn’t a likable character. His unsympathetic rendering doesn’t solely stem from the fact that he lied about being friends with Connor. His rot takes root in apathy, as he exhibits almost no regard for the feelings of Zoe, her parents or even Connor.

Almost no one in this movie feels like an actual person. The exception is Evan’s mother Heidi, played by Julianne Moore. Heidi is a single mom, working late-night nursing shifts to afford college for Evan. She desperately wants the best for him, even when he doesn’t notice her efforts. The musical’s best scenes revolve around her, the first occuring when Cynthia and Larry offer to cover Evan’s tuition. She’s proud. And you can see the gears shifting inside of Moore’s head before she declines. The second is the film’s most tender vocal, Moore’s Judy Collins inspired performance of "So Big / So Small." Apart from Cynthia, everyone else in this musical isn’t just inconsistent, they’re poorly drawn.

The film’s big reveal hinges on the total betrayal of a character, Alanna. Played with a modicum of sincerity by Amandla Stenberg, Alanna is the Student Body President who wants to prove that she’s worth something. In a film composed of self-interested characters, she’s the most selfless. But the writing in “Dear Evan Hansen” is so wretched, so manipulative, it needs to undermine her by dragging her down with the film’s other feckless drecks. She ultimately takes an action that sabotages Evan.

Compounding the frustration elicited by “Dear Evan Hansen” is how often the costuming, the set design, and other small details like props reveal the film’s seams. T-shirts and sweaters are hewn closer to Platt’s body to make him look younger, but they do the opposite. The bland homes of both Evan and Zoe aren’t at all lived-in, displaying very little character beyond a department store commercial. When Evan looks at his yearbook to see Connor’s favorite books, heady titles like Kurt Vonnegut’s Cat’s Cradle appear. But Connor looks no more than 10 years old in the picture. Rather the reading list is composed of the stereotypical titles associated with suicidal teens. At every turn, “Dear Evan Hansen” takes the lower, easier route. Each time it does a disservice to the misunderstood group with which it falsely claims empathy.

With “Dear Evan Hansen,” Chbosky aims to identify with those struggling with mental health challenges, but he and the source material only possess a superficial understanding of such travails. The worst scene (among many bad ones) is when Evan gets the recording of Connor singing during a group therapy session, sending it to everyone he knows. Who videotapes a group therapy session? Who then sends that footage? It’s blatant emotional manipulation on the part of the film. Chbosky's film concerns itself solely with pulling at heartstrings, and then stamping them into the saccharine ground. “Dear Evan Hansen” is a terrible, misbegotten musical with too little self-awareness to care how out of tune it sounds.

This review was originally filed from the world premiere at the Toronto International Film Festival on September 10th. The film opens on September 24th, only in theaters. 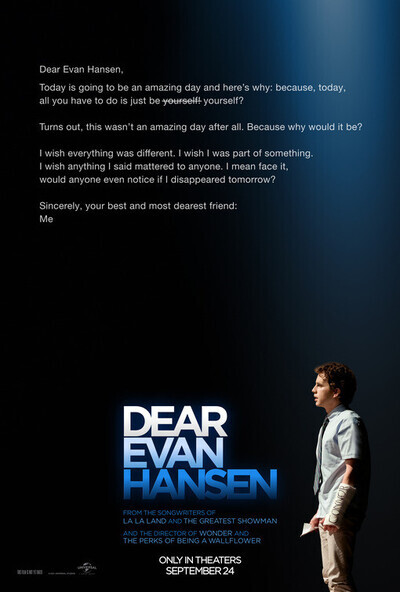 Writer (based on the musical stage play with book by)