In 1973, R&B legend James Brown appears on “Soul Train,” and host Don Cornelius asks him for his advice to young people. Brown tells them to work on themselves. And then Cornelius introduces a 19-year-old who is embarking on a lifetime of working on the rest of the world. Like Brown, he has impressive hair and is completely at home in front of an audience. He has been preaching since age four, ordained at age nine. He is heading up a national organization of young activists. He presents James Brown with a framed, black-colored record. He explains that a gold record represents sales, but a black record represents Brown’s ability to express what the Black community needs to hear.

The teenager was the Reverend Al Sharpton. And in this small archival moment, we can see that Sharpton was already ambitious on his own behalf and on behalf of justice, a world-class networker (he became Brown’s tour manager), and a master communicator, combining the inspirational cadences of a preacher, the timing of a comic, and the ferocity of someone whose deepest belief is his often-repeated: “no justice: no peace.”

“Loudmouth” is a documentary about Sharpton as a public advocate, made up almost entirely of archival footage, with no new commentary except for an interview with Sharpton himself. It touches lightly on one of his most controversial cases, 15-year-old Tawana Brawley’s claims of horrific abuse, and we see her lawyer’s ill-advised claim in court that she would not appear to answer questions because no Black person could get justice in America. Sharpton’s only response today to the conclusion after a seven-month grand jury investigation that she had not told the truth about being assaulted is that if you think the jury in the O.J. Simpson case was wrong, you should be willing to question the jury in her case. He admits that he saw in her all the Black women like his mother who were not supported by men and therefore he had to support her.

The film does not cover his personal life or other controversies like the IRS claims of unpaid taxes or his switch from Pentecostal to Baptist. But in a reflective moment, he says that the hardships he has suffered make it possible for him to minister to others with authenticity. “I didn’t come to shame them or use them. I came to help them and help the cause.”

This is a movie that observes Sharpton; it does not try to explain him or measure his impact. Those who are not already aware of his history may find it superficial or confusing. The clearest sense we get of his journey is the contrast between the early footage with a more flamboyant appearance and his more subdued, elegant, slimmed-down look, with impeccable bespoke suits and understated ties. The archival footage does include some criticisms. One man says Sharpton is “in the civil rights business” instead of being a “civil rights leader.” Sharpton says he is fighting for the rights of Black people to enjoy what the world has to offer. Why shouldn’t he?

We get a sense of his celebrity in a huge gala 65th birthday celebration that opens the film. He is greeted warmly by Robert De Niro, then-Governor Andrew Cuomo (son of the governor Sharpton pressured into appointing a special prosecutor), and Senator Chuck Schumer. Sharpton later mentions being on the dais at the Capitol building when Barak Obama was sworn in as President. But a more significant moment might be when he quietly tells teenage Darnella Frazier, who took the cell phone video of the death of George Floyd, that he will speak to her later to make sure she gets the support she needs and deserves. Yes, he says, he seeks publicity. But that is the most important tool he has to bring attention to the cases that are otherwise unseen, the ones whose stories can spur systemic change. Significantly, after he and other members of his group are arrested, it is the video footage of the arrest that gets them all released. And it is balanced by what he does off-camera, with private daily phone calls to the families of those he is advocating for.

Sharpton says he knows the difference between a moment (achieving justice in an individual case) and a movement (systemic change). His primary focus is on challenging the convenient narratives of those who benefit from the status quo, as important for his Black audiences as for whites. He tells Black audiences that they have the right and the ability to insist on change. And when he tells audiences of all races “no justice: no peace” it is not a threat. It is a reminder that the first is necessary for the second.

Now playing in select theaters and available on digital platforms on January 13th. 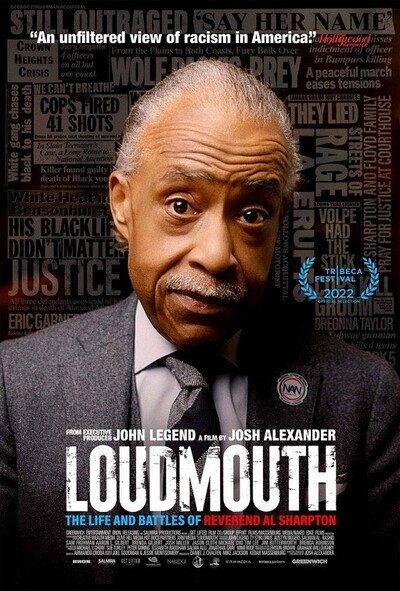