A sexual and political awakening

“Lore” gets right down to business. We're in Germany at the end of World War II, watching a large, once-prosperous family pack hurriedly to avoid the onslaught of Allied forces. A Swastika emblem on a discarded piece of clothing tells us we're dealing not with mere German citizens but Nazis. No wonder the mother looks petrified as she torches documents and the father flees at the first opportunity.

Other than the rather slovenly father, this is one gorgeous family. The mother might as well be Marlene Dietrich in her prime. The eldest daughter looks like a Leni Riefenstahl Aryan goddess. Her four younger siblings have been spared none of the stunner genes. That these Hitler Youth are easy to watch on a superficial level seems part of director Cate Shortland's strategy: We are about to see these beauties trudge through every muddy, thorny stretch of the Black Forest, into the kind of indignities and horrors their parents' political party inflicted upon the Jews. We know where this is going pretty early on, but that doesn't prevent “Lore” from being riveting stuff, start to finish.

The focus shifts from the mother, doomed to face Allied justice for her and her husband's apparent connection to a concentration camp, to Lore (Saskia Rosendahl), the daughter whose coming of age happens alongside her awakening to the truth: Hitler, her Santa Claus, her Jesus, presided over genocide.

Shortland is a sensualist, using constantly shifting handheld cameras shooting tight and close to make each step of Lore's education a palpable event. When she leads her siblings through the forest on a quest to grandmother's house, it ain't fairytale stuff. We see poorly shod feet set down in mud puddles, skin scratched and bruised by jutting branches, the air crowded with insects, smoke, mist, rain. Shortland seems determined to represent every kind of sensation and yearning in image and sound.

Which is why it doesn't raise eyebrows much when this film starts to become as obsessed with Lore's sexual awakening as it does her political one. Shortland's way into a scene is holistic: Lore's physical and emotional response to events merit equal scrutiny; each draws current from the other. When the kids meet up with Thomas (Kai Malina), an apparent concentration camp escapee who also happens to be a volatile and daring young man, his courage attracts her; his possibly being a “dirty Jew” repulses her. He circles the family discreetly but relentlessly, following them through the countryside like both a predator and a protector. But whenever they're in trouble, he steps in and takes charge. There are moments where we're unsure if Lore and Thomas will tear each other's clothes off or eyes out or both.

There's a style of filmmaking widely known as “Shaky-Cam” which increasingly threatens to cause an audience revolt as the new century rolls on. Shaky-Cam movies deploy handheld cameras to record the events of a screen story in pseudo-documentary style. When done sloppily and incoherently (usually in action films) it earns scholar Matthias Stork's designation, “Chaos Cinema. When done with inspiration and control, you get the realist classics of the Dardenne brothers and Ken Loach, the earthy lyricism of new classics like “Beasts of the Southern Wild" (2012) and the Andrea Arnold “Wuthering Heights” (2012).

“Lore” belongs in the inspiration-and-control camp. It makes dizzying flourishes out of moments that would pass as filler in other films. A sublime shot of Lore's younger sister skipping rope on a dirt floor sings of their rapidly vanishing youth with such slow-motion grace it aches. (It also evokes Riefenstahl's "Olympia.")

Very little of this style-to-burn would mean much without actors to give it a pulse. All of the children are living fully in their moments of terror, disillusion and heartbreak. It's slightly disturbing to see such young kids, down to the swaddled infant, put through such an ordeal, but the payoff justifies the torture.

Here's the payoff (no, not a plot spoiler): The protagonists are stand-ins for us. Wherever “Lore” is apt to screen, most audience members are likely to be citizens of the 27 NATO countries that signed onto America's War on Terror. How many of these folks are as loyal and unquestioning of the war's aims and practices as Lore is of her Fuhrer early on? How many Americans among them believe in extrajudicial killing of fellow citizens “suspected” of ties to terrorism -- and in assassination-by-robot-plane of individuals thought to be linked to Al Qaeda? How many Westerners subscribe to the “better there than here” philosophy that has kept thousands of foreign civilian deaths out of our sight? (An international treasure, thenausea.com, was censored off the web a few years ago, due to its raw images and videos of war atrocities that shame governments on every continent.)

I'm referring to a specific contemporary situation, but “Lore” offers up its lessons for all time. Citizens everywhere are often lost in the fog of their nation's propaganda, until reality comes crashing in. Lore's mental breakdown begins at an exhibit of fresh holocaust photos. The Americans taunt her and her neighbors with stark black & white images of concentration camp bodies piled high. Denial and acceptance push her to the verge of suicide. This can't be real. I don't live in a country that could do this to innocent people. 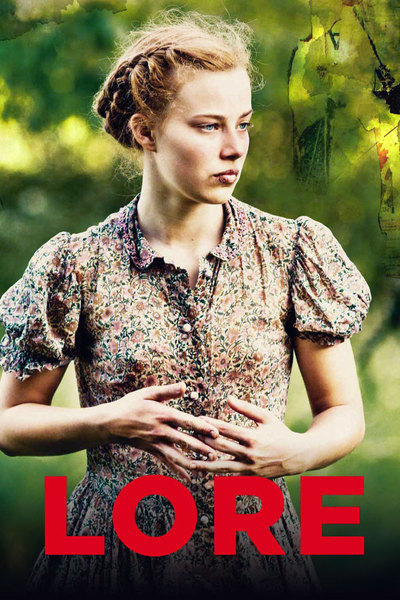