Rumors still surround Lizzie Borden, who, in August 1892, according to the famous rhyme

... took an axe
And gave her mother forty whacks.
When she saw what she had done,
She gave her father forty-one.

But let's get the facts straight. It wasn't her mother, it was her stepmother. It wasn't forty and forty-one whacks; more like 18 and 11. The crime, inquest, and trial (Borden was acquitted) ignited a national frenzy, predicting the tabloid-dominated 20th century, spanning from the 1907 trial of Harry Thaw, accused of killing Stanford White, the lover of his chorus girl wife Evelyn Nesbit, to O.J. Simpson's 1995 "not guilty" verdict for the murder of Nicole Brown and Ron Goldman. The trial of Lizzie Borden was so famous that a century later grade school kids still know the rhyme. She's generated a cottage industry of books, television movies, and conspiracy theorists (it was the Irish maid who did it! No, it was Lizzie! No, it was her uncle!). "Lizzie," directed by Craig William Macneill, and starring Chloë Sevigny as Lizzie and Kristen Stewart as Bridget Sullivan, the Borden family maid, is the latest in a long line of interpretations. One popular theory was that Bridget had something to do with the murder, or was at least covering for Lizzie when she was interviewed at the inquest. In his 1984 novel Lizzie, Ed McBain speculated that Lizzie and Bridget were lovers, and this new "Lizzie" runs with that theory, piling on top of it a host of other problems—financial and emotional—which, all together, force Lizzie's hand. The frustration with "Lizzie" is that a lot of it works, but the style—elegant, hushed, and period-appropriate—acts as a damper on all the fraught possibilities. "Lizzie" is at war with its own impulses. You can sense there's a sexy overheated melodrama in there, yearning to burst free of its corset.

In the opening sequences, Lizzie's strict father (Jamey Sheridan) forbids her to go to the theatre by herself. She disobeys him, and, after an altercation with a woman in the powder room, has an epileptic seizure in the aisle during the performance. Lizzie hates her stepmother (the great Fiona Shaw), whom she suspects married Mr. Borden for his money. Lizzie also fears her uncle John (Denis O’Hare) is plotting to get control of Mr. Borden's huge estate, cutting out Lizzie and her sister Emma (Kim Dickens). Family dinners are very awkward. But there's more. Anonymous threatening notes are left at the door, saying things like "No one will save you from what is to come." Bridget, the new maid (re-named "Maggie" by Mrs. Borden), is raped by Mr. Borden on a nightly basis, but forms a bond with Lizzie, who helps Bridget learn to read. Forbidden nameless feelings bubble up between the two women. The story is so top-loaded with "motivation" it buckles under its own weight. Mr. Borden is painted with such a black dye he's an outright Gilded Age villain, which may have been the case, but it's a pretty simplistic approach for what could be, ultimately, much more chilling and dramatic. In the recent mini-series "Alias Grace," about Grace Marks, Canada's own notorious murderess, convicted of killing her employer in 1843, director Mary Harron established a truly disturbing tone and mood, with Sarah Gadon's performance a destabilizing vortex at its center. "Lizzie" seems obvious by comparison.

Dressed in blues, whites, and pinks, Sevigny is so pale she looks almost transparent, but she carries herself staunchly upright, erect and tense. When sexual feelings start to come up, she is so unprepared for them her body quivers. Stewart, with a whisper of an Irish accent, is understated, the shadows under her eyes showing the deprivation of Bridget's background. If anyone's really trapped in that household, it's Bridget. Stewart has a relationship with the camera that other actresses can only dream of. Her face withholds and expresses, simultaneously. This combination draws the camera (and the viewer) in. Olivier Assayas was so taken with Stewart's face there's barely any other characters in his wonderful "Personal Shopper." Stewart has the smaller role in "Lizzie," but she dominates the screen, without any effort or pushing. The two actresses work well together, though, creating a palpable sense of desire, and there are some nice touches like the two women handing love notes to one another as they pass on the stairs, afraid to speak out loud in a hostile environment. But the script shovels in so much else - shady finances, pigeon murder, evil stepmothers - that "forbidden lesbian love" becomes just one more item on a very long list.

The movie looks incredible, though, and Noah Greenberg's cinematography turns practically every shot into a work of art. He focuses on the spaces in the house, the blank windows, slanted roof, dark wooden furniture and creaking floors, misty light coming through the curtains. The house is gloomy, claustrophobic, and beautiful, all at the same time. Since the majority of the film takes place in the house, Greenberg's focus on all those nooks and crannies makes the house come alive as a character, comfortless and watchful.

Bryce Kass' screenplay includes many details from the trial reports (the bit about Mr. Borden killing Lizzie's pigeons a couple of months before the murder), but there are some howlers in the dialogue, suggesting, again, that "Lizzie" wants to be a melodrama but—for whatever reason—doesn't allow itself to go there. At one point, Mr. Borden sneers at Lizzie about her "desperate attempts to play the society matron with your wanton displays ..." But we've seen no "wanton displays." We haven't seen her "play the society matron" at all. She went to the theatre by herself. If this is meant to be as shocking as Bette Davis wearing a red ballgown in "Jezebel," we need to see that.

Sevigny, who publicly expressed her disappointment in "Lizzie," has said her dream was to do a "smash the patriarchy" version of Lizzie Borden's story. Despite lines designed to speak to our era ("This is America, sir. Every man with a pulse has enemies."), "smash the patriarchy" isn't really in operation at all here, except in the most ham-fisted way. Maybe tilting the deck so in Lizzie's favor deprives the story of its true charge and fascination. 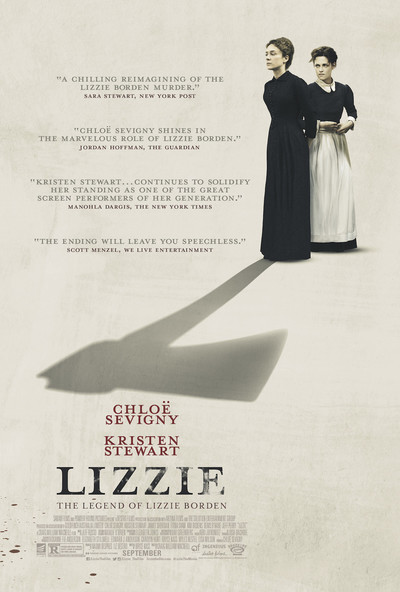 Rated R for violence and grisly images, nudity, a scene of sexuality and some language.