Trying for comedy inside the margins of the migrant crisis is playing with fire. But with his sophomore feature “Limbo,” a humanistic, tenderly deadpan plunge into the psyche of a Syrian refugee, Scottish writer/director Ben Sharrock sidesteps potential hazards like a patronizing tone and cultural insensitivity with deft, delivering something insightful, genuine, and universally relatable.

Indeed, within the world of movies that unfold around the international refugee crisis—a long catalog of features and non-fiction films of late that liberally and perhaps unavoidably lean into physical and psychological suffering—Sharrock’s tale feels almost like a small miracle with its defiant stance against exploitative hopelessness. It’s not that “Limbo” ignores despair altogether or dismisses the spiritual hurt that its displaced human beings, stuck on a remote Scottish island while awaiting resolution on their asylum cases, experience day in and day out. It just engages with its characters’ pain differently than you might expect. Through a refreshing narrative angle that maintains its tight and modest focus on alienation, a thematic resolve supported by thoughtful visual compositions that prioritize negative space and isolation, Sharrock unearths the many absurdities of misplacement with great perceptiveness. "Limbo" creates an earned sense of hazy sadness, specific to its desolate locale and the persons that inhabit it.

In the lead is Omar, played by a terrific, misty-tempered Amir El-Masry who wears the kind of melancholy Sharrock is after on his sleeve like a second skin. A gifted musician back in Syria virtuosic with the strings of an oud, Omar spends his days in an in-between state just like the rest of the refugees stationed at the weird, cut-off seaside outpost. Despite being unable to play it due to a combination of fear and a mysterious hand injury, the young man carries his grandfather’s oud around dutifully like an extension of his body. With his family scattered to different locations—his parents are in Istanbul and his brother, still back in Syria to be a part of the resistance—Omar often gazes into empty space with a tint of nostalgia and hangs out with his similarly placeless companions, when he doesn’t visit the town’s sole phone booth to call his family. Throughout “Limbo,” Sharrock disperses Omar’s moving conversations with his mom like cadences of a musical arrangement. On one day, we hear him get the recipe of his favorite native dish featuring spices like sumac, near-impossible to obtain on the island. And on another, mutual worries about the future of their family take over the long-distance chat.

Through various sweetly observant scenes, Sharrock constructs a complex portrayal of Omar that both rises him above his austere circumstance, and blends him into it with distinctive care. In that regard, Andy Drummond’s attentive production design and Nick Cooke’s shrewd cinematography accentuate the barrenness of Omar’s surroundings, like the barely furnished temporary apartment he shares with his Freddy Mercury fan roommate Farhad (a gentle and amiable Vikash Bhai), the hardly stocked grocery shop he patronizes, the bleak landscape that envelops it all ... In unison, these elements serve as constant reminders of emptiness that advance the severity of Omar’s emotional estrangement.

Sharrock’s greatest feat here is using all these absurdist touches towards achieving a sensitive, reflective sort of humor—think of something in the vein of “The Band’s Visit,” but directed by Yorgos Lanthimos—without making Omar and his mates the butt of the joke. Instead, Sharrock insists that the joke’s on the locals of “Limbo,” oblivious to their own privileges; particularly two cultural integration teachers, Helga (Sidse Babett Knudsen) and Boris (Kenneth Collard), tasked to educate a couple of dozen young men like Omar on Western societal etiquette. In one session (which serves as the film’s hilarious opening), they demonstrate sexual boundaries by a ridiculous scenario set on an imaginary dance floor. In another, they illustrate proper ways of interviewing for a job over the phone. While the men play along, sometimes with jaw-dropping earnestness, you can’t help but hear their inner voices that mock the clueless but well-meaning Helga and Boris deep down.

Additional bursts of humor, mixed with instances of heartfelt sorrow, are also be felt elsewhere, particularly through the Nigerian brothers Abedi (Kwabena Ansah) and Wasef (Ola Orebiyi), who endearingly argue about the future (one wants to be a footballer, while the other has modest aims) with as much passion as they fight about the latest episode of “Friends” that they’ve seen. (Did Ross and Rachel break up or are they on a break?) Slowly, Sharrock spawns a lovely dynamic amongst his quartet of players, building Abedi and Wasef as full-fledged characters, while adorning the delightful Farhad with further charming qualities, like his selflessness in wanting to help Omar out with his music career as his agent and manager. Admittedly, Sharrock’s ending feels a bit abrupt and minor. But that lapse doesn’t undercut the time you will have spent amongst his lovable dreamers on a stark yet paradoxically beautiful place frozen in time, just as distant and forgotten as its transitory dwellers. 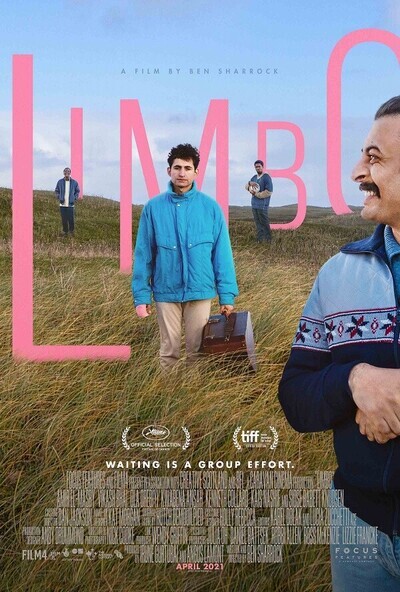