Some recent publicity for this movie, perhaps inspired by festival-circuit reviews, is pushing it as a variation of John Ford’s “The Searchers” transposed to contemporary France. I believe the invited comparison is pretty ill-advised.

“Les Cowboys,” directed and co-written by Thomas Bidegain, begins in the mid-1990s at a small food-and-music festival in France—a so-called “cowboy fair”—devoted to American country music. The spectacle of French folk sporting big metal belt buckles and cowboy hats, and trying to do justice to the likes of “The Tennessee Waltz” could be played for laughs, but Bidegain finds a quiet, earnest dignity in his subjects. The sequence is the best thing in the movie, in a walk. Lead character Alain (François Damiens) is about to lose his daughter, who runs off with her Muslim boyfriend that evening. And so Alain is set on an obsessive quest, one that will cost him much, including his marriage. His sense of mission is exacerbated by the events of 9/11, which happen more than half a decade after the daughter runs off.

Eventually Alain enlists his son Georges (Finnegan Oldfield) in his quest. One gets the sense that the younger fellow is more resigned to the loss of his sister, and goes along with his dad largely to keep him from going completely off the rails. At the midpoint of the film there’s a major shift that puts Georges in the forefront of the narrative. He understands that his older sister’s choices are her own, or at least he chooses to believe that they were. Nevertheless, he’s resolved to at least lay eyes on her again. To that end, he, like his dad, compromises his personal relationships and opportunities, and journeys to Afghanistan, where he throws in with a shady American operator played by John C. Reilly.

The movie overplays its hand throughout, albeit in an unusual way. It’s terribly scrupulous, careful, unostentatious. It proceeds with a hushed tone that wants to be taken for observant modesty, but eventually reveals itself as suffocating self-importance. The movie is pedantic, humorless, dry—all of the things that, as it happens, “The Searchers” is not. (There is a school of thought that believes “The Searchers” is a slog and a drag, but I invite you to watch or rewatch the film yourself some time to decide which of us is right.)

Director Bidegain, a longtime screenwriter, has his name on a bunch of good-to-near-great films—Jacques Audiard’s “A Prophet” being among the good, Bertrand Bonello’s “Saint Laurent” being among the near-great—but his feature-helming debut sees him indulging in some tendencies a more proactive editor might have been able to talk him out of. In particular, Bidegain likes to hold on a shot after a significant action has taken place for a couple of beats longer than might be considered customary, for no other reason than to nudge the viewer in the ribs and get him or her to nod in agreement, “Yeah, that’s right, Mr. Director, what you’ve shown me IS pretty heavy.” Which ain’t how John Ford did it. Even at his actual heaviest. 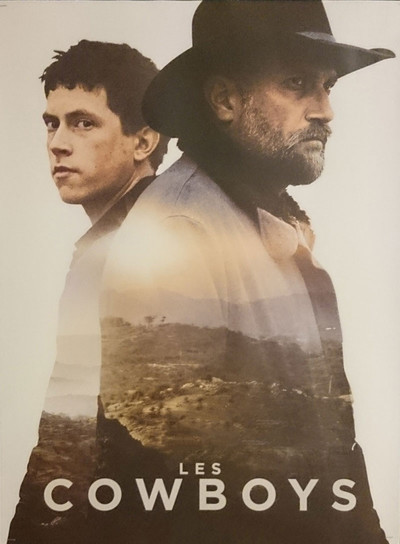 Rated R for a brief violent image and a scene of drug use.