In the Icelandic pastoral thriller “Lamb,” director Valdimar Jóhannsson’s grippingly assured directorial debut that ruminates on parenthood, family and nature, Maria (Noomi Rapace) and Ingvar (Hilmir Snær Guðnason) are noticeably unhappy. Living on a remote, mountainous landscape that looks to be frozen in time, the rural farmers barely exchange words or crack a smile. Stern faced and muscularly poised, the hardworking couple just go about their day, plowing their land, harvesting their crop and tending to their livestock of lambs, ewes and horses with the same serious yet joyless dedication. You can sniff a sense of loss in the atmosphere that penetrates this otherwise tranquil scenery of quietly sharp colors, icy skies, and intimidating soundscapes. There is Christmas music on the radio, but none of the customary holiday cheer in the air. And somewhere out there in the wild, an insidious brute is making its rounds around the couple’s barn.

It’s on the heels of this silent misery that the duo’s happiness finally arrives in the most what-the-f**k-is-this form imaginable, the WTF-ness of which a late-entering character also reacts to in one of the film’s various moments of subtle deadpan comedy. A shocking sight for the viewer to receive and accept, it’s a reveal that also presents an immense writing challenge for any critic attempting to do justice to the film’s pacing through its secrets. While the adorably unnerving creature that blesses the household of Maria and Ingvar is very much the premise of “Lamb,” co-writers Jóhannsson and Sjón (also a poet and an author) conceal her identity and expose her visage in such a studiously slow fashion that one thinks twice before describing her and possibly ruining the experience for the readers. In that regard, it’s best to go completely cold into “Lamb,” which increasingly becomes a mongrel of a folkloric psychodrama and chamber horror, with preoccupations and a mood that fall somewhere between Robert Eggers’ “The Witch” and Ari Aster’s “Midsommar” even when the film can’t sustain its raw appeal all the way through unlike these aforesaid titles. That said, continue reading on only if you aren’t all too concerned about spoilers.

Those who are still with me: meet Ada, a half lamb-half human sweetie-pie believably created with the help of some CGI puppetry as well as real animals and young actors. Maria and Ingvar welcome her into their modest home so warmly and casually that you wonder whether they are able to see what the rest of us do. They feed her, bathe her, and tuck her in like everything is extremely normal with this cuddly creature, supposedly a gift that nature has bestowed upon them. What throws their newfound contentment off is the arrival of Ingvar’s brother Pétur (Björn Hlynur Haraldsson), a sibling evidently close with Ingvar, and perhaps closer than he needs to be with his sister-in-law.

The rivalrous dynamic Jóhannsson establishes within the household is both fiendishly fun to follow, and one that wears thin fast with not much to expand on. The same could be said about the film’s overarching concerns about parenthood, grief and mankind’s greedy domination of nature to protect their immediate and selfish interests by any means necessary. (Those who are extremely sensitive towards animal suffering and casualty should especially beware the company of these people who want to have their lamb and eat it too.) It’s not so much that co-writers Jóhannsson and Sjón lack deep ideas around these themes. But “Lamb” puts them all on an obscure backburner for far too long, prioritizing its skillful aesthetics and tone over a meaningful exploration of the anxieties at its heart.

Still, a fierce sense of originality you won’t be able to shake and look away from nearly makes up for the film’s relative lack of depth. Seen through the spooky, foggy lens of cinematographer Eli Erenson that recalls the enigmatic style of Béla Tarr (it can’t be a coincidence that Tarr is an executive producer here), the visual world of “Lamb” is immersive and soulful, qualities matched by Rapace’s expressive presence at every turn. While it’s not a thoroughly satisfying stew of style and substance—plus, it could’ve used some sharper scares—“Lamb” nonetheless leaves a unique enough aftertaste for one to crave more of the same distinctive weirdness from Jóhannsson in the future.

Available in theaters on October 8. 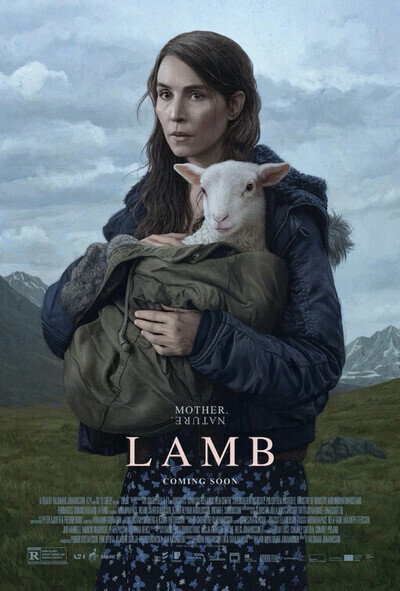 Rated R for some bloody violent images and sexuality/nudity.