“I come up with new ideas,” Yayoi Kusama says early in “Kusama - Infinity,” “and my canvas cannot keep up with me.” That’s one thing that director Heather Lenz’s documentary makes perfectly clear. Most of the film’s interviews—and as there’s no narrator, there are lots of interviews—include perhaps a brief clip of the person speaking, and then it’s back to the main event. That would be the art. It’s a fitting focus, as Kusama has, it would seem, always been about the art as well; throughout Lenz’s film, the camera spends most of its time slowly panning her creations, or photos of her in the process of creating them, and there was almost endless creation. As a study of an artist who, in the film’s telling, was nearly always ahead of the curve, it’s a surprisingly traditional approach. But Lenz’s frank, admiring approach adds a sense of clarity that gives the film an undeniable potency. Here is what she made, it says; is it not wondrous? Here is the hand she was dealt, it says; is it not unjust?

The approach is perhaps a little tame for an artist whose creations are so spiked with wildness, but it’s effective, all the same. After all, those creations are the purest pleasure of “Kusama - Infinity,” which follows the rise of a woman who, after years of work, innovation, and struggle both personal and professional, became one of the world’s most popular and celebrated living artists. The film uses those lingering gazes to take viewers right up to her vast canvases, overwhelming sculptures, and sparkling, seemingly endless “Infinity Rooms.” We see her brushstrokes, the places paint has thinned or globbed. We see the tiny little wobbles in the line that appears as she pulls a far marker across her canvas. We see the glint of one mirror ball before we see the effect of them all lined up together, wobbling on the ground as the mind behind them attempts to disrupt a system not built for her.

If the film does nothing more than introduce unfamiliar viewers to her body of work, it will have been a worthwhile endeavor. But Wenz, and co-writer Keita Ideno, take a similar approach to Kusama’s biography. In some ways, the narrative of the film is somewhat less satisfying—more on that below—but the respectful frankness suits in particular one aspect of her life story, and that’s the way both the art world and the world in general did, at best, a disservice to a groundbreaking talent. On three separate occasions, we see something Kusama creates, some innovation quietly but enthusiastically received by those who see it, often artists. Then one of those artists takes that innovation and makes it his (it’s always his) own, and roses rain down. There’s no sense of heightened drama at work. We’re shown, for example, one of Kusama’s overflowing sculptures, in this case a boat, positioned on a floor and amidst walls covered with pictures of that boat. It’s jarring, enveloping, plain old cool. Andy Warhol agreed, and in the film’s telling, told her so. Soon that exact approach would be used in one of his widely covered, heralded exhibitions.

It’s a pattern that repeats, and each time, there’s a just-the-facts- approach that suits the telling. It’s not about accusations, or stolen glory. It is what happened to this woman, over and over again. We see her work, we’re told about their connection, we see his work, and we get the timeline. They become legends. She toils endlessly for a foothold. Were she a white man, the film effectively demonstrates, it would almost certainly not have been this way.

Still, the tone and energy of “Kusama - Infinity” are far from bleak. Despite the artist’s lifelong struggle with mental illness, addressed from what you might call a generous distance, it’s an openly energetic story, capturing the independence, invention, playfulness, and unabashed desire to provoke of its subject. When combined with the art, and with composer Allyson Newman’s infectious, playful score, it becomes joyful and affectionate. Those being interviewed help reinforce the tone. Even those discussing some of the darker chapters of Kusama’s life seem alight with satisfaction at her success; one speaks admiringly of her ability to “manage madness,” adding, “She’s used her trauma to enormously productive ends.”

And that’s where Lenz’s work comes up just a bit short. Within minutes, moments really, most viewers, even those previously unfamiliar with Kusama’s work, will have accepted the argument that she’s a creative giant whose work is well worthy of this kind of film. But also within moments, we’re introduced to corners of the artists’ life where darkness lives, and it’s made clear, in Kusama’s own words, that the darkness is not just an important facet of her life, but an inextricable element of the art as well, if not its primary drive. I personally, to an extent, appreciate the restraint Lenz and Ideno show—a story about a person with mental illness that doesn’t salivate over trauma and drama is a rare and welcome thing. But Kusama tells us about a life-altering, traumatizing experience in a field of flowers—something formative and shattering—and we’re never brought closer. She tells us about throwing herself out a window, surviving only because she landed on a bicycle, and we learn little about how this affected her, how her her art changed, if it changed, if she changed. We see the blobs on the canvas, but only fleetingly the shaking of the hand that guides the brush.

Yayoi Kusama began life with parents who didn’t value her art, in a country that didn’t value it for many decades; she entered a world that loved her ideas, especially when they came from someone else, and reviled her for having a knack for publicity that earned her male contemporaries huzzahs. She makes, to put it plainly, weird, evocative stuff that’s much more affecting and challenging than the odd glimpse of the selfie-friendly “Infinity Boxes” might lead one to believe. There’s something oddly comforting about such a person serving as the subject for a documentary this respectful, and traditional. It’s the treatment you get when you’re one of the greats. It allows viewers to see her art the way she has always seen the polka dots that dominate her work: “When I see them, my eyes get brighter, and I am always moved.” 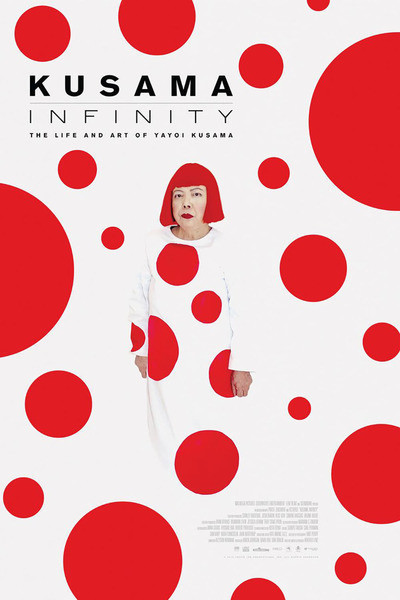 Yayoi Kusama as Herself