You can tell a lot about a director by how they direct a train sequence. With scenes that required locomotive management just as much as filmmaking precision, directors ranging from Buster Keaton to Justin Lin (for “The General” and “Fast Five,” respectively) created classic spectacle out of playing with (and then destroying) trains. In the case of Chinese director Ding Sheng and his latest film, “Railroad Tigers,” which features many sequences on trains but not a single nominee for locomotive movie history, its non-cohesive set pieces only symbolize the wreck this venture quickly becomes. Though it boasts a large scope with its ensemble cast, huge sequences and the star power of the almighty Jackie Chan, “Railroad Tigers” lacks the vital focus to come together.

Within Jackie Chan’s oeuvre, this one is for Chan completists only, if due to his lack of action, despite being a leader of the title freedom fighters group. The year is 1941, and Chan’s Ma Yuan works with a ragtag group of young men to cause havoc on the Japanese army that occupies China. Their main method is by hijacking trains and stealing supplies, as shown in an opening sequence where they knock out some soldiers and inscribe their group logo (a tiger with wings) on the soldiers' bare stomachs.

The Railroad Tigers have a less vague purpose when they come across a wounded soldier, who speaks about plans to bomb a bridge that helps the Japanese army get their supplies. Inspired by the war effort and open to a suicide mission, Ma Yuan and friends decide to attack the bridge themselves. They’re pursued by the stone-cold Yamaguchi (Hiroyuki Ikeuchi), a captain of the Japanese military police.

If only this very simple story was more cohesive with tone. Starting with slapstick but eventually transitioning into dark moments of pain, “Railroad Tigers” doesn’t have the finesse to pull off a more innocent riff on “Inglorious Basterds.” Its cartoonish impulses sully the historical stakes, and vice versa (“That really hurt!” a soldier says, impaled by his own overturned vehicle). Even more disorienting, it’s all framed as a flashback, started by a young boy looking into a train engine marked with the Tigers' symbol. Along with the title cards that clue viewers in to each scene (“Rob the Train”), “Railroad Tigers” clearly wants to be understood by all, including kids, but runs like a careless comedy about the sacrifices of war.

And about those title cards: they only become a shallow gesture at involving the viewer, especially as the amount of information thrown at the screen doesn’t lead to emotional attachment to anyone or anything. The hugeness of the story and its lack of tension becomes all the more apparent with a scant promise of surprise, and so many characters important enough to receive their own designation. It makes “Railroad Tigers” all the more inconsequential—the kind of stakes you don't want to have when your movie involves a wartime ensemble and a massive train set.

Enthusiasts of train sequences in movies will be pleased to know that the locomotives get a lot of screen-time in “Railroad Tigers,” for a robbery, an escape, a chase and more. But said devotees will be deterred, if not distracted as I was, by the amount of blue screen usage in each sequence, seemingly any time Ma Yuan and his crew are outside the trains. With that in mind, the editing does little to clarify essential ideas like geography or distance when it comes to different train cars. The third act does succeed with striking visuals (mostly from its practical set), appearing like sunlight after a day of fog.

With little to grab onto—and despite all that it offers—“Railroad Tigers” is far slower than a goofy action movie that mostly takes place on a locomotive should ever be. Not even Chan provides charisma for a fan like yours truly to find solace in, as he is on-screen often but activated for very little. Instead, his charm is taken and spread thin between a group of young men that lack personality, individually or collectively, with only their age to make them much different than Chan. It’s one of many ways that the movie cheapens itself, making for non-compelling viewing instead of a smooth ride. 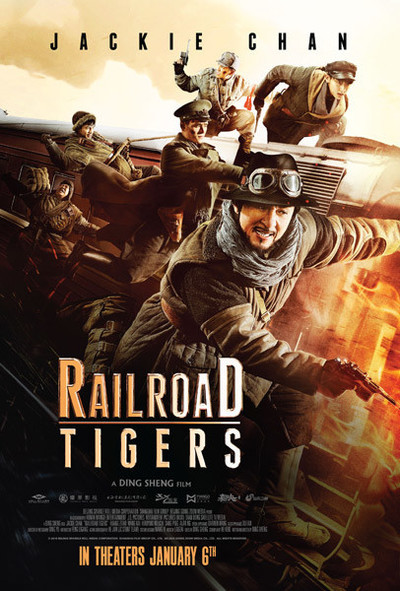