“King of Thieves” is a heist film inhabited by a grey-haired gang of British acting royalty, men who had, in their younger days, played all manner of criminals and hustlers. Leading the pack is Michael Caine, who has embodied some of the most clever and most sadistic criminals the cinema has ever known. Backing him up are gritty thespians like Ray Winstone, who was Gal in “Sexy Beast” and Michael Gambon, the thief of “The Cook, The Thief, His Wife and Her Lover”. Jim Broadbent is also present, and though cast against type, his acting resume does include “Boss” Tweed in “Gangs of New York” among other shady roles. The trio is joined by Tom Courtenay, who was once confined to a cinematic reform school for theft in “The Loneliness of the Long Distance Runner”.

That’s a lot of robbery expertise for one movie. And the advanced ages of these actors make them as unlikely a band of suspects as the real-life crooks they portray. Those men were responsible for 2015’s Great Hatton Garden robbery, the biggest jewel heist in London’s history. The caper was so intricate and well-executed that investigators initially assumed it to be the handiwork of a much younger European robbery syndicate. Imagine the surprise when the true villains turned out to be several senior citizens with rap sheets as long as their lifespans.

With this cast and this story, “King of Thieves” should have been a homerun for any director. But James Marsh (“The Theory of Everything”) can’t decide if he’s making a light comic caper like “Going in Style” or a heavy, terrifying crime drama like “Mona Lisa.” Not even a master of both genres like Caine can navigate the wildly shifting tone of Joe Penhall’s sloppy script. The result invites confusion and ultimately indifference on the viewer’s part. When one character makes a joking reference to Alec Guinness’ brilliant Ealing comedy “The Lavender Hill Mob” the comparison does this film no favors.

I mentioned “Going in Style” because both films concern themselves with rowdy old men who choose robbery as a means of trying to outrun the Grim Reaper. But both versions of that film stacked the deck with reasons that force their characters’ hands. Here, the idea seems to stem from boredom more than anything else. “King of Thieves” starts out with Brian Reader (Caine) reminiscing with his wife (Francesca Annis) just before her sudden death. At the funeral, his partners in crime keep talking about old victories and Reader becomes hungry for an invigorating score.

A heist film is only as good as the execution of its caper set pieces. The fun of films like this is reveling in the often Rube Goldbergesque ways someone can steal something. Reader’s plan involves drilling through walls, pushing over heavy cabinets, a perpetually drunk fence, a lookout who can neither hear nor stay awake and a skittish young safecracker named Basil (Charlie Cox) who is way out of his league. Somehow all this manages to sit onscreen generating little interest. Meanwhile, Marsh overcompensates with unnecessary quick cuts and on-the-nose needle drops, drawing attention away from the mechanics and the minutiae of Reader’s plan.

In keeping with the proverb about “honor amongst thieves,” the alliance starts to fray as soon as the team succeeds. This leads to the only spark of intrigue “King of Thieves” offers: Who earns the film’s title? One could predict that it’s Brian Reader, who masterminds the heist yet walks away right in the thick of things. Could he secretly be orchestrating a  complicated plot to sow distrust amongst his team in the hopes they’ll all off each other and leave the  riches to him? Is it Winstone’s brawny Danny Jones, the muscle of the team? Or is it Gambon’s Danny the Fish, the fence with a very small bladder and a very big booze habit? The deserving heir to the throne is obviously the one who doesn’t get caught.

Penhall based his script on an intriguing, informative Vanity Fair article by Mark Seal. I highly recommend reading the source material instead of spending nearly two hours watching this film. “King of Thieves” is a disappointing mess that lacks both suspense and a clear identity. Not even the occasional joy of seeing these fine actors riff with one another can save it. 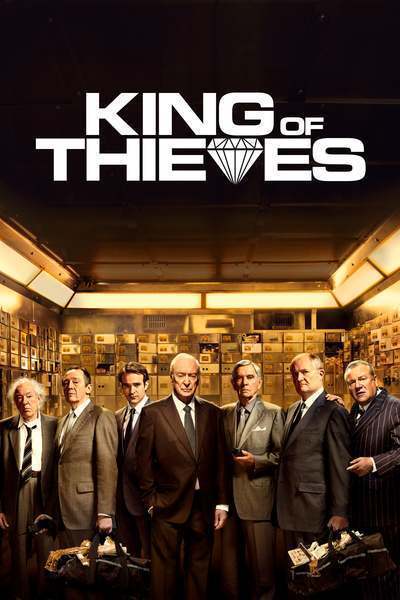