The original “Going in Style,” from 1979, was about three elderly, lifelong friends who decided to rob a bank for kicks. They were sick of sitting on the same bench in the same park every day, talking about the same things and feeding the same pigeons. They wanted to feel young and alive once more—and if they got caught, who cares? They were probably going to die soon anyway.

Veterans George Burns, Art Carney and Lee Strasberg played the three gentlemen with ease and grace, handling the snappy banter as deftly as the heavier moments of regret and loss. And the pacing from director Martin Brest (more recently of “Gigli” infamy) was unhurried, allowing us to get to know these men intimately in both the warmth and the melancholy of their twilight.

The remake of “Going in Style” also is about three elderly, lifelong friends who decide to rob a bank—but they do it for retribution. Just as the first film was very much of its time in terms of substance and tone, so is this modern-day remake. Like the thematically similar (but vastly superior) “Hell or High Water,” this “Going in Style” is a how-we-live-now movie, as folks still find themselves struggling to recover from the economic collapse of 2008.

And as is so often the case with broad, commercial remakes, director Zach Braff amps up the energy from the very start. The comedy is bigger, the supporting players are wackier and the antics move to the bouncy beat of an incessantly perky soundtrack. And the script is more of a crowd-pleaser—which makes sense, given that it comes from “Hidden Figures” co-writer/director Theodore Melfi—both in its characters’ likability and in their purpose.

Because you see, Joe (Michael Caine), Willie (Morgan Freeman) and Al (Alan Arkin) don’t rob just any bank—and they don’t do it just for fun. They rob the Brooklyn bank that’s screwing them over, as if having a justifiable reason for their crime somehow makes these septuagenarians more rootable or relatable.

That’s one of the many ways in which this remake plays it safer than its source material. And yet, its stars are such pros, they’re so enormously charismatic and have such lovely chemistry with each other, it’s hard not to be charmed by their mere presence on screen. Caine, Freeman and Arkin—Oscar winners, all—know exactly what do to and how much of it to do, both individually and as an ensemble, every time. They are delightful company. Several scenes are set at the trio’s favorite diner, an unfussy place where the coffee is bad but the pie is good and the waitress (Siobhan Fallon Hogan) is sassy. The entire movie could take place there and that would be just fine.

“Going in Style” does deserve credit, though, for lacking the kind of wacky jokes that so often make old-man comedies like “Last Vegas” and “Space Cowboys” groan-worthy. There are no Viagra gags or bits about incontinence. And these guys aren’t baffled by technology: Willie frequently Skypes with his daughter and granddaughter, whom he only sees in person about once a year. Melfi mercifully gives these guys their dignity—and when they are the butt of jokes, it’s with affection for the way they bumble through their preparations.

Joe gets the idea to rob the bank when he sees a big heist go down there himself, just as he’s complaining that his mortgage has suddenly tripled and he’s on the verge of conviction. Then, when the steel company where he, Willie and Al worked for decades shuts down—and their pensions are frozen—the same bank just happens to be controlling the money. What are the odds? Meanwhile, Willie needs a new kidney. And his roommate, Al, a jazz saxophonist, is barely scraping by teaching music lessons to talentless kids in one of the film’s funniest bits.

So they decide to go for it, with a trial run at the neighborhood grocery store that’s probably the film’s highlight. (Kenan Thompson, as the gobsmacked store manager, makes great use of his brief screen time.) The solid supporting cast includes a lovely (if underused) Ann-Margret as Al’s flirty love interest, John Ortiz as the “thug” who trains them and Matt Dillon as the FBI agent on the case.

Braff’s direction of all these established actors is workmanlike, although he is a bit too reliant on gimmicks like split screens to keep the dialogue moving. Nowhere here will you find the self-conscious quirkiness of his debut feature, 2004’s “Garden State.” For the most part, he knows well enough to get out of the way and let his stars steal the show—and make a clean getaway. 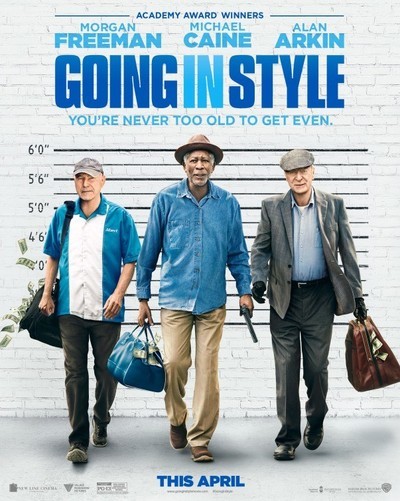 Rated PG-13 for drug content, language and some suggestive material.