"Boss" is a film suffering from one fundamental problem, to wit: a lack of commitment to its central purpose. To clarify, this isn't a pretense at critical omniscience, wherein "what 'Boss' should have done" is somehow less known to the makers of the film than some random writer on the other side of the planet. No, the opening titles declare "Akshay Kumar, in & as 'Boss'." The entire point is that Akshay Kumar, with his effortless magnetism and hoarse vocal delivery perfect for delivery of tough-guy dialogue, is the "Boss." And, for the (dismayingly brief) interludes in which Kumar flexes his star power and punches bad guys, "Boss" approaches being respectable. However, those are just about the only points at which "Boss" works.

The thing about assembly-line star vehicles is that if you have a sufficiently watchable star (which "Boss" more than does), all that remains then is to keep the pace brisk, the fan service abundant, and the lulls minimal. Instead, "Boss" devotes an extraordinary amount of screen time to setting up a story about how the "big boss" (Danny Denzongpa), a sort of freelance righter of wrongs, comes to adopt a homeless young man named Surya, who is the estranged son of a schoolteacher (Mithun Chakraborty) whose other son, Shiv (Shiv Pandit), falls afoul of a government minister and his two sons, one of whom is engaged to the girl (Aditi Rao Hydari) Shiv is in love with, the other of whom is the wildly corrupt cop Ayushman Thakur (Ronit Roy). Ayushman throws Shiv in jail for defending his girl from harassment. And all of this convoluted plot unfolds, at great length, before Akshay Kumar even appears on the screen, which is itself another few minutes before the opening titles.

Despite the lively introduction of the first person in the movie to have any charisma at all, the pace then regresses to its lethargic mean, and we're left with a movie that can't make up its mind whether its hero is a larger-than-life masala hero or an overgrown kid with daddy issues, and then forgets to put its star on screen for startlingly long stretches. The movie makes the fatal mistake of believing that the character of Surya/Boss, being as he is little more than a string of film clichés as old as Bollywood itself, is compelling, when in fact he's barely a character at all, he's an excuse for Akshay Kumar to do martial arts, smile, and make bad jokes. Which he does better than just about anyone in the world. His being sidelined for lengthy flashbacks featuring Surya as a teenager stops the movie dead in its tracks, and after too many flashbacks, the movie cannot fully recover.

The movie's other assets are minimal and fleeting. Prabhudeva shows up for a very brief cameo that serves mainly to make the audience wish they were watching a whole movie of him dancing. Sonakshi Sinha turns up briefly to just exist, which is fine. Honey Singh shows up on the soundtrack bragging about knowing Akshay Kumar, which he then proves by appearing onscreen with him. That's about it, though. The remainder of the film consists almost entirely of rote clichés, saggy pacing, and misogyny (women barely appear, and when they do they're either non-entities or shrill archetypes), with a bonus rape plot point that exists solely to heighten the stakes for a male character, and which may not have happened at all.

It's a truly sad reflection on "Boss" that it aspires to be a mass-produced hero vehicle with a paper-thin plot whose sole purpose is to make the hero look cool, and fails. That failure is even more impressive considering that the hero in question is a man who hasn't drawn a non-compelling breath in his life. But here we are. The task of coming up with even one persuasive reason to see "Boss" is a daunting one. Its appeal even to Akshay Kumar diehards is limited, as it feels as if he's barely in the thing. The fight scenes are the only thing, save a couple well-lit and composed shots and a couple admittedly funny jokes, that save "Boss" from being an unqualified disaster. 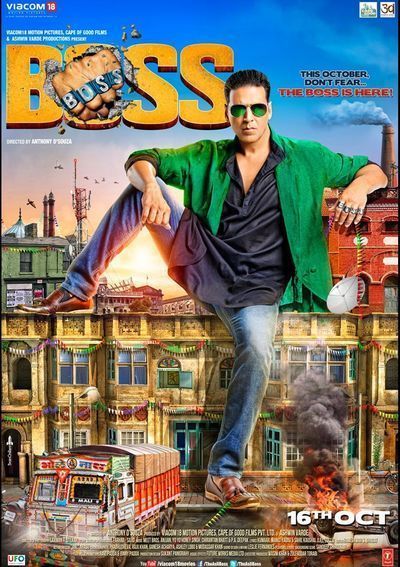