Ruthless and precise, Steven Soderbergh’s “KIMI” is a timely commentary on isolation and intrusion. Anchored by a striking performance from Zoë Kravitz, it sees the expert craftsman working with genre again, like how he did in “Side Effects” and “Unsane,” taking a classic concept right out of “Rear Window” or “Blow Out” and making it current to the era of Covid-19 and Alexa. Some of the final act of David Koepp’s script gets too far out there, and the whole thing wraps a little tidily for a film that’s largely about how even an agoraphobic can’t actually be alone, but there’s no denying that this is a taut, fun exercise. "KIMI" is a brilliantly paced, no-nonsense gem from one of the best American filmmakers.

The vast majority of the first hour of “KIMI” takes place in one Seattle loft apartment, occupied by the single Angela Childs (Kravitz). She works for a tech company that has a life-changing product called KIMI, which is basically a version of the real-world Alexa or Siri, although this one has some twists I don’t believe Amazon and Apple have considered. The main one is that errors in communication with KIMI are handled and corrected by an actual person. For example, someone asks KIMI to order “kitchen paper” and the tech can’t figure out what that is. Angela listens to all of these soundbites and teaches the technology another phrase for “paper towel.”

Angela also happens to be extremely agoraphobic. A product of the days when no one left their apartments during the pandemic, leaving more people to stare out their windows, she developed a relationship with the handsome guy across the street named Terry (Byron Bowers), but she only sees him when she texts him to come over, and she meticulously washes all the sheets when they're done. She can’t even leave to see her mom (Robin Givens), shrink (Emily Kuroda), or even the dentist (David Wain) who thinks she has an abscessed tooth.

One day, Angela is going through her errors and hears something truly disturbing. Behind a wall of music, there’s what sounds like a scream and a struggle. She’s tech-savvy enough to play with the sound and isolate the human element, which leads her down a rabbit hole of increasing mortal danger. Not only has she caught something horrifying recorded on a KIMI, but it’s actually (and, yes, this is a bit of a coincidence that viewers just have to run with) related to the company for which she works, one that wants all of this, including some of the tech secrets of KIMI it could reveal, to go away right now.

What starts as a hyper-focused exercise in confined POV, where we feel Angela’s increasing tension as we are stuck in that loft with her, shifts in the final half-hour to become more of a traditional thriller. Without spoiling, Angela’s investigation takes her into the heart of corporate darkness before "KIMI" circles back and reminds everyone that Koepp wrote “Panic Room.”

It should be no surprise to anyone who has followed Soderbergh's career to reveal that “KIMI” is as finely crafted as this kind of film can possibly be. Soderbergh glides his camera through the loft in a way that never calls attention to his style but always feels artistically grounded. His framing is always effective, as is the razor-sharp editing he does under the pseudonym Mary Ann Bernard. “KIMI” is such a tight movie, coming in under 90 minutes and without an ounce of narrative fat on its bones. And while Soderbergh himself is the main craftsman here, credit should also go to a propulsive score by the great Cliff Martinez (“Drive”).

As for theme, Soderbergh and Koepp are careful to integrate their ideas into the storytelling instead of pausing to convey them. It’s only when one is done with the white-knuckle plotting that they realize that they’ve just seen a story with some interesting things to say about privacy and how dangerous even a non-physical space like tech can be for a woman, even one who never leaves her apartment. You don’t have to leave anymore. There’s someone watching from across the street or listening from a device on your desk.

It helps a great deal to have a fully committed performer like Kravitz, who arguably does her career-best work here. She conveys Angela’s trauma and multiple phobias without leaning on them like crutches. She deftly understands that agoraphobic people aren’t just crying in a corner of their house, finding strength within Angela’s routines in the first half of the film, which makes her commitment more powerful in the second half. Most of all, she gives a beating heart to a movie that could have been very cold and distant.

We’ve seen films about surveillance and voyeurism for generations now, but those very concepts have changed in the new millennium as technology has allowed us access to other people in a way that Alfred Hitchcock could have never imagined. I’m pretty sure he’d make something a lot like “KIMI” if he had. 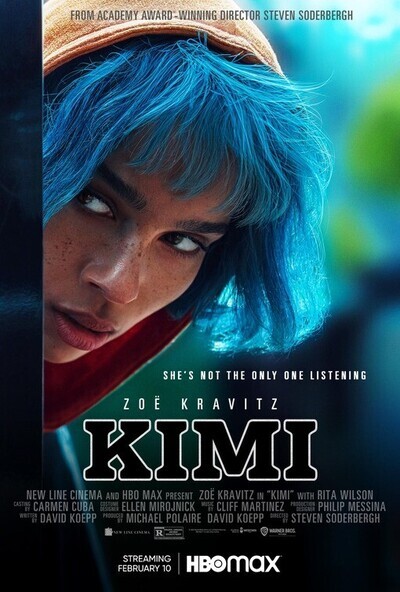