The story of a crusading reporter’s determined search for truth, “Kill The Messenger” gains its not-inconsiderable power by not being the kind of movie that particular description might lead you to expect. Or, for that matter, not being the movie of that description that you might want. The great based-on-a-true-story journalism movie of the last 65 or so years was, of course, “All The President’s Men,” chronicling the determined search for truth conducted by crusading reporters Bob Woodward and Carl Bernstein of The Washington Post. One of the distinguishing features of “Kill The Messenger” is that The Washington Post figures in the narrative as one of the bad guys.

Directed by Michael Cuesta (“L.I.E.,” “Rookie,” and, most pertinently, episodes of  “Homeland”) from a script by Peter Landesman (the writer/director of “Parkland,” who himself has a considerable background in investigative journalism), and starring Jeremy Renner, who is also an executive producer, “Messenger” is about Gary Webb, a feisty reporter for the San Jose-Mercury News who seems to be having a grand old time writing about drug dealers who are getting their houses illegally confiscated by the government. His wife (Rosemarie De Witt) tolerates the haphazard lifestyle such an occupation brings, up to a point; when the hotsie-totsie girlfriend of an accused trafficker drops off a package of files at Webb’s home, the missus alludes to some past trouble in the marriage. Turns out the hotsie-totsie (amusingly incarnated by Paz Vega) is kind of using Webb as a cat’s paw, but in so doing, she throws either the story of a lifetime, or a live grenade, or both, into his lap: information pointing to a government involvement in the crack cocaine trade, a byzantine arrangement by which the C.I.A. was able to fund Ronald Reagan’s Contras by either looking the other way at, or deliberately engineering, drug-money-for-arms transactions. Interviewing a big-shot dealer in a Central American jail (Andy Garcia), that dealer recalls a meeting with one “Ollie.” “Oliver North?” Webb asks, a little stunned. “No, Oliver Hardy, “ the prisoner says. “OF COURSE Oliver North.”

Despite the warnings of a D.C. bureaucrat (Michael Sheen) who suggests that characterizing the realm Webb is exploring as a “rabbit hole” would perhaps be an extremely dire understatement, Webb convinces his editors to run his story. Initially hailed as a hero, Webb is soon met with overwhelming skepticism. Papers such as The New York Times and The Washington Post, with “who is this upstart?” indignation, start picking at aspects of the story, and then at Webb himself. The trouble to which Webb’s wife had alluded to returns to bite him and his family in the ass, hard. “They’re going to make it about you,” Sheen’s character predicted. Boy, do they ever. The movie is, in its details, relatively discreet about laying blame but fairly definite in depicting a media culture now so entrenched in the establishment that it doesn’t even have to be coerced into serving the interests of the powerful. That the filmmakers are able to pursue their theme to the extent that the true story on which the film is based obliges them to somehow has to be credited to Renner. His performance is very good, despite the somewhat stereotypical bro characteristics with which the Webb character is here endowed. Around the mid-point of the movie, I noted that the material was sufficiently compelling that, say, the montage of Renner tooling around on a motorcycle being all stressed out was kind of beside the point. In light of the picture’s finale, that sort of thing made slightly more sense, but still carried an aura of special pleading.

That said, it’s a minor quibble relative to the pretty substantial points the movie’s making. The death of print and the death of journalism are two different phenomena, but they’re not unrelated; if you’re of the opinion that it’s all because of the Internet, well, “Kill The Messenger” has some perhaps disturbing news for you—about the news you are now getting, and the news you are now not getting. 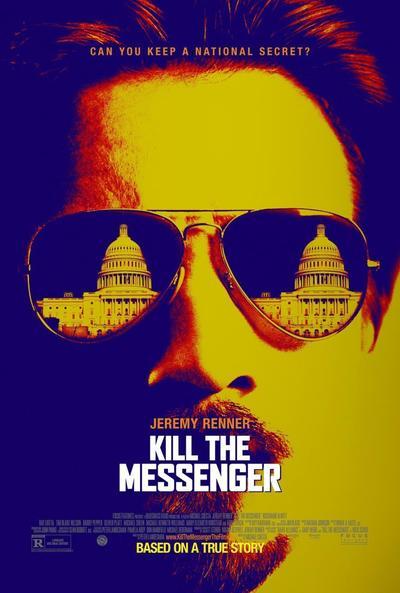