Revisiting the assassination of President John F. Kennedy as the tragedy's fiftieth anniversary approaches, writer-director Peter Landesman provides an up-close-and-personal view of the events in Dallas by following the intertwined stories of several people swept up in the shooting and its aftermath. Taking its title from the hospital where both Kennedy and assassin Lee Harvey Oswald were pronounced dead, "Parkland" expends lots of energy and expertise on re-creating these infamous events, yet it is so lacking in narrative purpose that many viewers are likely to leave muttering, "Okay…but so what?"

The reason for that has to do with the Kennedy assassination's place in the national imagination. Much of the event's lingering fascination stems from the perception of unsolved mystery that still surrounds it, and questions about the effects it had on the nation's subsequent history and character. Whether one agrees with it or not, Oliver Stone's seminal "JFK" was a huge critical and commercial hit because it addressed those issues head-on, giving us a challenging and compelling reading of the tragedy's nature and meaning. In concentrating instead not just on "the facts," but on the dubious official version thereof (the film is based on Vincent Bugliosi's book "Four Days in November"). Landesman unfortunately asks us to focus our attention on the assassination's most superficial, least interesting aspects.

The narrative begins on the morning of November 22, 1963. As it will throughout, the film mixes newsreel footage with dramatic re-creations as President and Mrs. Kennedy arrive in Dallas and embark on their fateful motorcade toward Dealey Plaza. After intercutting among some of the tale's many characters, it picks up businessman Abraham Zapruder (Paul Giamatti) who is filming with his 8mm movie camera when Kennedy is shot. ("Parkland" does not show the bloody deed, either in a dramatic staging or directly via Zapruder's footage.)

Thereafter, the action shifts to the ER of Parkland Hospital, where an unprepared medical team led by doctors Jim Carrico (Zac Efron, sporting a fashionable stubble) and Malcolm Perry (Colin Hanks) is suddenly plunged into dealing with the President's near lifeless body as blood-spattered Jackie Kennedy sobs nearby. Landesman renders the scene as believably chaotic and improvisatory, and though it only takes a few minutes for JFK to be declared dead and a Catholic priest to be called in to administer last rites, it feels much longer.

As news of the death shocks the nation, the story spirals outward, following, for example, the efforts of officious FBI veteran Forrest Sorrels (Billy Bob Thornton) and his cohorts to wrest Zapruder's film from him and have it developed; the subsequent scramble by Life magazine and other outlets to buy it; Dallas FBI agent James Hosty's (Ron Livingston) agonized realization that he had been in contact with Lee Harvey Oswald (Jeremy Strong) but had not learned enough about his aims to stop him; and the confused scene at the Dallas jail where Oswald is held until he too is assassinated. (The film does not question that Oswald was the sole killer of JFK or that he also shot Officer J.D. Tippett, although, rather curiously, it does not show him committing either crime.)

Later episodes in the four-day chronicle include the hasty efforts to get JFK's coffin on board Air Force One and the swearing in of JFK's heavily guarded successor, Lyndon Johnson, as Jackie and Kennedy's chief aides look on mournfully. Though the airplane's departure means that some of tale's main characters move on to Washington, DC, the film remains planted in Texas. As TV reports show JFK being interred in Arlington National Cemetery, Oswald is hastily buried in a rural graveyard by his family and a crowd so sparse that reporters are enlisted to serve as pallbearers.

For viewers who know a fair amount about the JFK assassination, the latter episode points to one of "Parkland"'s few points of real interest. Relatively little attention has been devoted to Oswald's brother Robert (James Badge Dale), who never doubted that his sibling killed Kennedy even as their mother Marguerite (Jacki Weaver) steadfastly maintained that the government framed Lee. The scenes involving the Oswald family have a freshness that other parts of this oft-told tale lack.

Landesman and cinematographer Barry Ackroyd shoot the action verité-style, with a lot of rushed camera movements and the kind of reliance on telephoto close-ups that perhaps will be very satisfying on an iPhone but can induce headaches for anyone who sits too close in a theater.

The acting spans the gamut. Best of all is Marcia Gay Harden in a nearly wordless performance as an ER nurse, followed by James Badge Dale's thoughtful turn as Robert Oswald. In the middle are Giamatti and Thornton, whose work recalls many other items on their respective resumes. And at the other exteme is Jacki Weaver, whose bizarrely overwrought Marguerite Oswald suggests an SNL skit about the community theater doing Tennessee Williams on LSD. It's rather jaw-dropping, though perhaps not in the way the makers of "Parkland" intended. 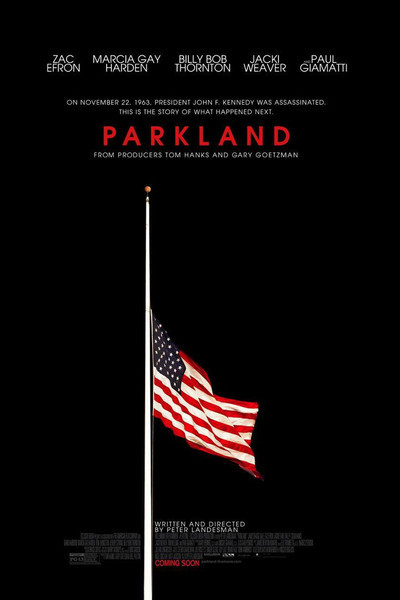